If pleasures are greatest in anticipation, just remember that this is also true of trouble.
Elbert Hubbard

Many experts penned numerous articles this year proclaiming that the Gold market was ready to take off and that 2016 would be the year that the Gold bull resumed its upward trend. They spoke of our high debt, a weak economy and listed a plethora of reasons as to why Gold was ready to soar. Needlessly to say, their fear mongering proved to be fruitless for instead of taking off, Gold nose dived. Early in the year we stated that we did not expect much from Gold this year; we wrote several articles but will highlight points from one of them as it adequately sums our overall theme for 2016

In April 2016 we stated the following

From Feb to March of 2016, Gold responded in the correct manner, as the dollar traded lower, it traded higher. After that, the situation changed, and Gold has been putting lower highs while the dollar has traded to new lows. This indicates that one market is out of sync, and this market is Gold. Thus, the dollar is likely to bottom and rally again, while the rally in Gold is likely to fizzle out. This initial strength in Gold is the perfect setup to knock the early bulls out; we would not be surprised if Gold experiences one final move down to the $1000 ranges, before putting in a multi-year bottom. We are not ready to jump on the Gold bandwagon yet and have maintained this position since we bailed out in 2011. The trend would need to turn positive before we turn bullish on gold and so far the trend based on our trend indicator is neutral. Tactical Investor

What does the future hold in store for the dollar and Gold? 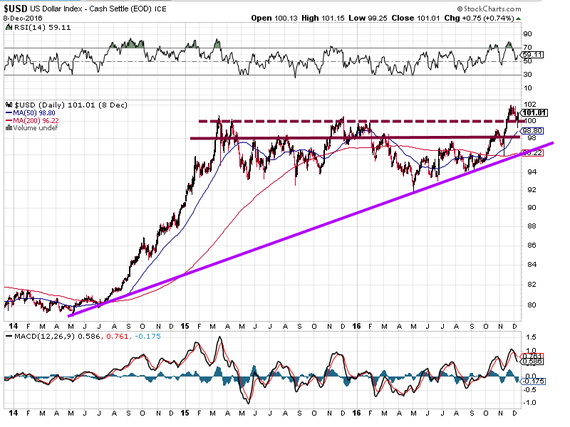 One can clearly see that the dollar is in a strong uptrend and as we alluded back in April 2016, it was the dollar that was likely to bottom out and rally higher, while Gold was more liable to break down and that has now come to pass. The dollar has a decent layer off support in the 97.60-98.00 ranges, and it is attempting to move this layer of support up to the 100 ranges. For this to come to pass, the dollar needs to close above 100 on a monthly basis. If it can achieve this, then the odds are very high that the dollar will trade on par with the Euro. 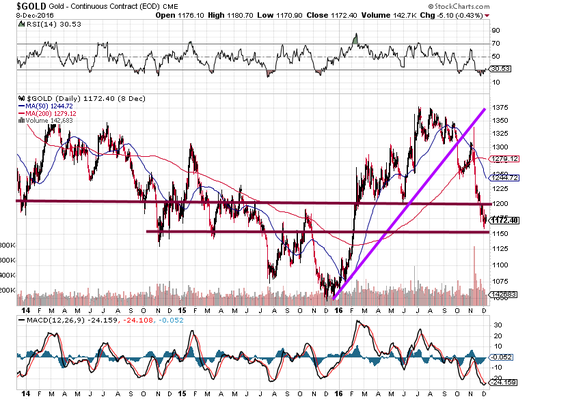 For the past three years, Gold has consistently failed to hold above $1350. It attempted to break past this zone three times in 2016 and one each occasion it failed. To make matters worse, it tore through $1200 with ease building the case for a test of the $1000 ranges. A weekly close below $1150 will pave the way for a move down to the $1000 ranges and possible overshoot to $960-$990 ranges.

The pattern in the dollar index is extremely bullish, and it appears destined to trade significantly higher before a top is in place. The odds of the dollar trading on par with the euro (something we stated was possible back in 2011) could become a reality in 2017.

Gold broke through $1200 too fast, and this does not bode well for Gold in the short term. A weekly close below $1150 will all but assure a test of the low $1000 ranges with a possible overshoot to the $960-$990 ranges. At that point, despair will grip the Gold bugs, and a long term bottom should take hold.