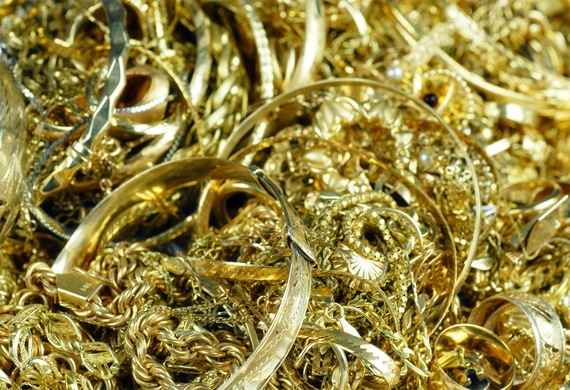 The sign in the store window was too large to miss: "Trade Your Gold and Silver for Furniture". By the time I pulled into my driveway just a few miles away, I had experienced a range of emotions surrounding what the sign meant, what it conveyed, what it said without saying.

For days the sign continued to disturb my thinking on the daily commute to work. It sounded brazen and rude and raw with what seemed like an underlying message that anyone -- on either side of the "furniture for gold or silver" transaction -- should be ashamed to acknowledge being a part of. But I have learned that disturbances are food for thought, an indicator to go deeper than the obvious ripples on the surface.

If I have learned nothing else in my work with those experiencing homelessness, it is that the situations that got them there are as complex as our collective humanity. I don't know anyone who would say that humanity is a simple, one-dimensional construct. Yet we know that the practice of quickly assessing and categorizing other humans at a glance and without regard to their humanity is painfully prevalent.

Over time, my neophyte awareness of the complexity of the societal and systemic issues that create and strengthen poverty has broadened. The boundaries of my perception about people and society in general are challenged as every day I see evidence of damaging policies and decisions based on shallow, superficial knowledge of the poor. It is this that, in part, compels me to allow time for my own initial judgments to expand, and in this case, to see that ultimately there is a person(s) behind the business establishment that put up this sign.

There are only a few large furniture stores in Detroit proper. Businesses that want to provide products or services to the larger swath of Detroit residents face the realization that they are competing for scarce dollars. Developing ways to stay in business in a city where two-thirds of the residents can't afford basic needs is a challenge. According to a recent United Way study, 67 percent of Detroit families are either under the poverty line or "ALICE" (asset-limited, income-constrained, employed).

Identifying a target market (those with gold or silver but no money) and meeting a need (furniture in exchange for gold/silver rather than money) could be seen as both business-savvy and accommodating. Identifying a gap and fulfilling a need that the customer may not have previously realized and profiting from it is, after all, business. Those who become customers by taking advantage of the offer may see it as a viable alternative in a sphere of no cash and scarce opportunity.

The line between business acuity that accommodates customers and capitalizing that takes advantage of them is not always clear. I'm convinced that this would make for an interesting case study in ethics on a university campus somewhere. But my own ponderings included a refresher reading of author John C. Maxwell. In his book There's No Such Thing as Business Ethics, he posits that ethics do not exist apart from persons. And that the one rule for making decisions, business or otherwise, is to treat others in the way that you, as a person, want to be treated, doing for others as you want them to do for you. It's commonly known as "The Golden Rule" but exists in various forms across a number of spiritual, cultural, and religious traditions and teachings.

Since doing for others what we want done for us is proactive and personally executed, it begins with asking how we would want to be treated in all situations that we find ourselves a part of -- whether service, business, personal relationships, work or otherwise.

Doing so, though human, is not complex, because it is based on what humanity has in common. These commonalities serve as the touchstone that maintains awareness of our own humanity and that of others as we form decisions. According to Maxwell, this is the short list of what all human beings have in common when it comes to how we want to be treated:

I'm sure we can agree that no person wants to be devalued, unappreciated, mistrusted, disrespected, misunderstood or taken advantage of by others. It makes the exchange of gold or silver for furniture even more unresolved in my thinking.

But -- or perhaps I should say "and" -- for now I will follow the advice of one of my favorite authors, Parker J. Palmer, and embrace the paradox of this situation in hopes that it will "make my [our] world larger, more generous, more hopeful." According to Palmer, if we are willing to "actively hang in there... holding the unresolved tension between reality and possibility," we invite something new to emerge.

Here's to something new in the future reality of business that does not emerge from either seeming opposite, but from that which is golden in both.