When a museum exhibition is referred to as a blockbuster, one expects its major draw to be something along the lines of Mona Lisa, or Girl with a Pearl Earring. However, the exhibition that just opened at The Getty Center has nothing of the sort, and still, it is a bona fide blockbuster. 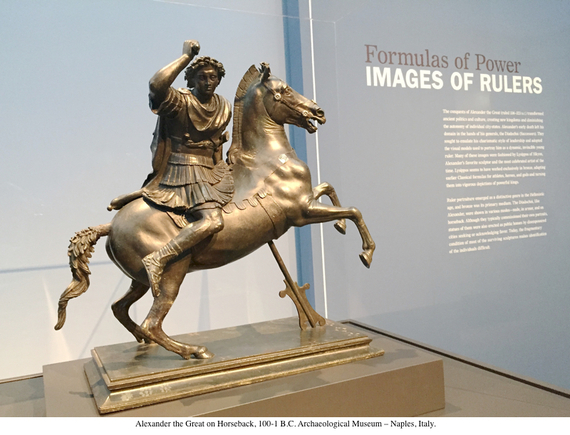 The exhibition consists of over fifty ancient bronze sculptures on loan from the museum collections of a dozen countries. Most of them are at least 2,000 years old and are described as Hellenistic sculptures in reference to the Hellenistic era (4th to 1st centuries B.C.) initiated by the empire founded by Alexander the Great. No more than 150 life-size Hellenistic sculptures survived, and this exhibition allows both scholars and us regular visitors a unique opportunity to see in one place and in real time exceptional artworks that one would otherwise need to spend years traveling to museums around the world to experience. 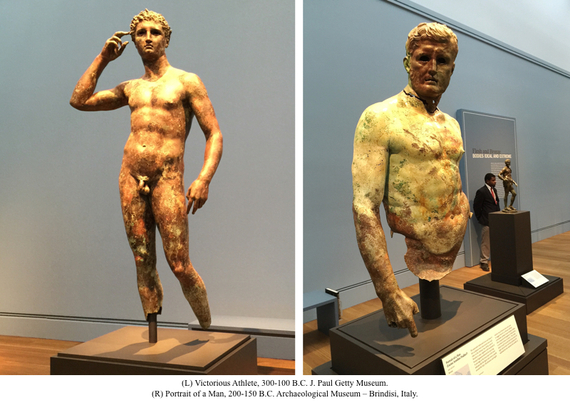 Let's start with the Victorious Athlete, also known as "The Getty Bronze." This remarkable life-size sculpture of an athlete putting a laurel wreath on his head shows him as an idealized, almost divine version of a human being. But most of the other sculptures in the exhibition show that the artists of the Hellenistic era had a pronounced interest in more realistic, more intimate portrayals of the human body and spirit. Just take a look at another sculpture of an athlete, this one from an Italian museum in Brindisi. The lower portion of the body is missing, but the head and torso remain intact. And what a face! He is looking at us with an element of wariness, as if he is uneasy about our confrontation. 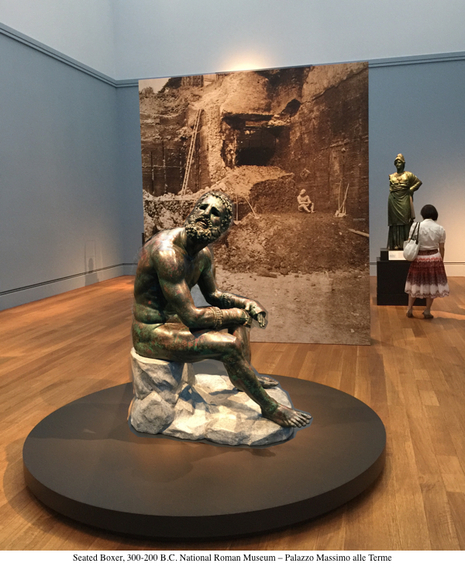 There is one particularly well-preserved sculpture in the exhibition, and that is of the Seated Boxer. It is a particularly striking example of the realistic presentation of a human body and the complexity of human emotions. The Boxer has just finished a fight; he is tired and sweaty. There are drops of blood on his face and body. Looking at his face, one cannot help but feel a deep empathy to his physical pain and emotional exhaustion. 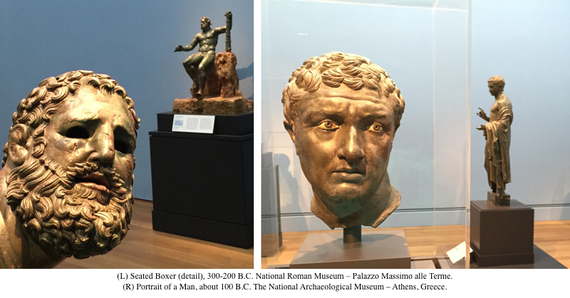 It's pure luck that this sculpture was excavated in Rome in the late 19th century. In previous centuries, many similar sculptures were melted to use their much-desired bronze to mint coins and cast cannons. The only thing that's missing in this Boxer are his eyes. Originally the eyes for such sculptures were carved with marble and glass but in most cases the eyes didn't survive. This blockbuster exhibition has a few extremely rare examples of bronze heads with eyes intact. 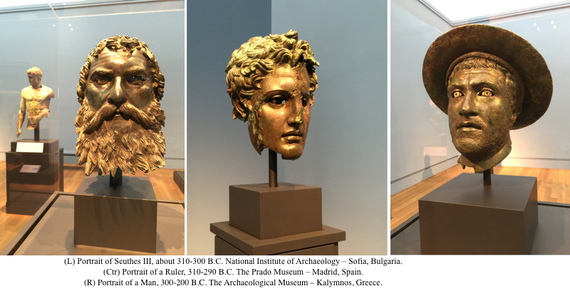 One of them -- a portrait of an aging ruler -- exudes a sense of overwhelming, intimidating power. This sculpture was found a few years ago in Bulgaria. Not only are his eyes intact, one can even see traces of his delicate eyelashes. And the way this ruler stares at you is anything but delicate. 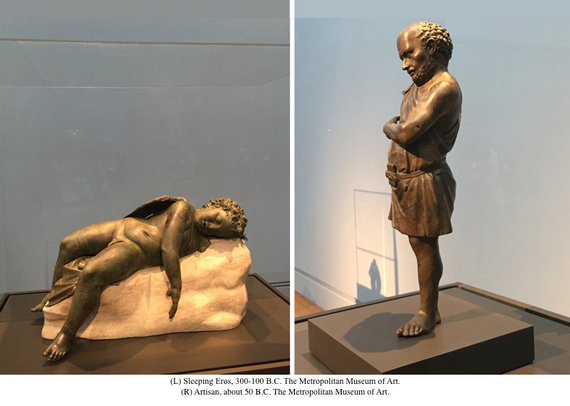 An irresistibly charming depiction of child god Eros shows his wings and sleepy, lumpy body drooping over the stone on which he naps. In another example of the typical Hellenistic approach in naturalistic depictions of the human figure, the artist shows a figure of a middle-aged, balding man caught in the quiet moment of contemplation. His head tilts slightly while one arm casually wraps around his chest. Considering his short tunic and the notebook tucked under his belt, one wants to think about this 2,000 years old image as the portrait of an artisan. But somehow, while staring at him, I feel the 2,000 years between us slowly disappear. And that is the magic with the many ancient masterpieces in this unique exhibition originally seen in Palazzo Strozzi in Florence and scheduled to travel to the National Gallery of Art in Washington D.C. after being seen here this summer at The Getty Center.