SAN FRANCISCO -- "The Golden Gate Bridge--nine thousand feet long, seven hundred and fifty feet tall, weighing 887,000 tons and coated in millions of gallons of International Orange paint--links the urbanity of San Francisco with the wild headlands of Marin County, as if to suggest the paradox of California and America itself," wrote California State Librarian Emeritus Kevin Starr in his new book "Golden Gate: The Life and Times of America's Greatest Bridge."

Starr was one of four panelists at The Commonwealth Club's tribute to the famous bridge, "The Golden Gate at 75: What Makes an Icon," on Thursday night. In his book, Starr called the bridge the most beautiful manmade structure on earth. And while some Egyptians might pose an argument, here at HuffPost SF, we couldn't agree more.

(SCROLL DOWN FOR PHOTO CONTEST)

On Sunday, the Golden Gate Bridge celebrates its 75th anniversary with a party fit for an icon, including a fair and festival, dancing and music, a historic watercraft parade and a nighttime firework spectacular. On each of the bridge's spires, UC Berkeley space scientists have even installed solar "birthday candles"-–mirror-coated heliostats designed to flicker in the sun.

The most recognizable bridge in the world, the Golden Gate remains a bit of an engineering marvel. The longest bridge before its construction was 700 feet shorter, and gapping the 1.7-mile stretch of Pacific was called an impossibility at the time of its conception. The Sierra Club (and reportedly The Commonwealth Club!) opposed the construction for environmental concerns, the military worried about exposing the city and old-time San Franciscans were against it because "they opposed anything that wasn't there already," joked Starr.

But nevertheless, the project was approved by popular vote, and construction began in 1933.

The span was completed in less than five years--ahead of schedule and under budget--without the use of computers or calculators. This fun fact serves as an especially sore reminder to a certain bridge on the other side of the city, whose current single span construction is nearly six years behind schedule and $5 billion over budget.

But Starr urged critics to take the Bay Bridge estimates in stride. "Eleven men died building the Golden Gate Bridge," he said. "Now there are safety and environmental concerns that we legitimately insist on that did not exist in 1937."

Of course, the Golden Gate is not without its flaws.

The astronomical cost of maintenance forces a continuous rise in tolls. At the 50th anniversary in 1987, bridge workers held their breath as the suspension stretched nearly to its limits to hold 300,000 pedestrians just one year after the roadway was reinforced. ("It's impossible to play 'ifs'," said Starr at the Commonwealth Club. "But lets put it this way: it's fortunate that that improvement happened before the anniversary event occurred.")

And most pointedly, the bridge has been the site of approximately 1,600 suicides--second only to Japan's Mount Mihara, an active volcano nicknamed "Suicide Point."

In 2008, the Golden Gate Bridge Board of Directors voted 14-1 to erect a safety net beneath the bridge. A similar net spared 19 lives during the bridge's construction: "the members of the halfway to hell club," noted Starr. Funding has stalled the new net's construction.

"You remember in Physics class--for every action there is an opposite and equal reaction," said Starr. "All of that beauty, that grace and magnificence. I think it can speak to someone differently, and act as a fatal attraction."

In his closing statement, fellow panelist American Society of Civil Engineers Chairman Paul Giroux remarked on the meaning and significance of the bridge.

"An icon represents something different to each of us," he said. "It gives us hope because it speaks to us as individuals; it speaks to our hopes and dreams for the future."

Love the bridge just as much? Submit your favorite photos of the iconic structure below for a chance to win a signed poster by legendary local art director Rich Silverstein. 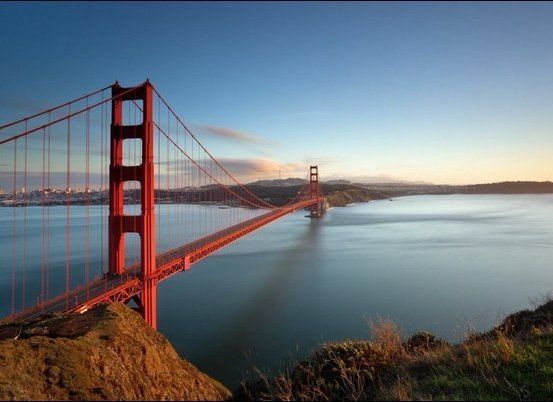