Using the fingers of only one hand, take a moment to count the number of lesbian or gay seniors you see on television each week. When finished, you'll probably find that you still have enough free digits to smoke a cigarette and sext your boyfriend. The longstanding invisibility of LGBT seniors in the media is no accident, as I discovered when one of the world's largest talent agencies tried to turn my "scandalous" memoir, Postcards From Palm Springs, into a scripted television series. There were lots of hosannas about my skill as a writer, but the axe always fell on the side of "no deal."

The Hollywood equation is this: Old + gay = doubly niche. There is simply no market for that. The Zeitgeist has spoken: "Buh-bye now." So like any good, slightly miffed writer, I decided to put the whole sordid, saddening story down in black and white in Hollywood or Lust, my newly released sequel to Postcards. Yet while I was diligently kicking the desert sands, typing my way toward a dénouement of defeat, redemption arrived like Dudley Do-Right in the form of an open-call audition for a Canadian reality series.

You know Canada. It's that country to the north that actually provides universal health care for its citizens, is socially progressive and has sufficient petroleum resources to avoid pandering to potentates while uttering platitudes in Farsi. My audition ultimately led me to the 13-episode reality series Golden Gays, which debuts on the Canadian network Slice on Friday, March 22, at 10 p.m. ET. Filmed entirely on location in Palm Springs (which may be the gayest city in America), the show has it all: lipstick lesbians, butches, drag queens, authors, bears and leather men acting out their own psychodramas under the desert sun. As the show's Carrie Bradshaw and self-described "trophy geezer," I provide the voiceover narration that keeps the cast's out-of-the-box shenanigans from descending into chaos. 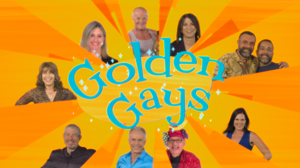 Regardless of the show's ultimate success, the significance of Golden Gays lies in the fact that it is the first television show in history to focus on the lives of lesbian and gay seniors. By definition, this is groundbreaking television. Lesbians and gay men who came out of the closet in the early '70s, as I did, had no role models. Although we probably didn't realize it at the time, we not only took on the task of defining a new way of being in the world but had to reshape society and force the culture at large to make room for us. Until now, no generation of individuals could say that they spent an entire lifetime leading an openly gay lifestyle. It just wasn't possible. After decades of pioneering by being, we must now define what "old and gay" looks like; we never had role models for that. Golden Gays finally puts a face on gay aging. Win, lose or draw, gay seniors have a place at the table at last.

It's too soon to tell exactly where this is headed, but personally, I have my sights set on shooting my own gay geezer rap video. That Gangnam Style stuff is so last year. And at 62, I can still bust a move.

Watch the trailer for Golden Gays: