Everyone knows and loves "The Golden Girls." But who knew that a television show about three widows and a divorcée would leave an indelible mark on American pop culture? For almost thirty years, the adventures of Blanche, Dorothy, Sophia and Rose entertained us. Most people can even sing the theme song. But what do we know about the house that the series was set in? We do know the address: 6151 Richmond Street, Miami, Florida (unfortunately, no such address exists in the real world.) The house was originally owned by Blanche. Then, Dorothy and Rose moved in after replying to a "roommate wanted" ad that Blanche left at a grocery store. Finally, Sophia moved in after the Shady Pines Retirement Home burnt down, and the rest is history. The exact layout of the house was never made clear, though several people have come up with varying ideas of the floor plan based on descriptions of the house from the series itself. Though this can be subject to debate, what we can all agree on are how the rooms inside looked. The one that we're probably most familiar with is their huge, iconic living room. It has to be bigger than most Manhattan apartments! During an episode in the third season, it was used to host a press conference with Soviet Union officials honoring Rose's plea for nuclear disarmament. Unfortunately for Rose, they thought she was a preschooler. The furniture is made of wicker and there are loud floral prints everywhere. Hey, this was Miami during the 1980s! The other main room was their kitchen, which was pretty small by comparison. There were only two important pieces of furniture in it: a small circular table with seating usually for three and a kitchen island. The kitchen set might be familiar to some people; it was used for the short-lived sitcom "It Takes Two" which served as a big break for actors Anthony Edwards and Helen Hunt. For the first season of "The Golden Girls," the kitchen windows looked out into a Chicago city background, a leftover prop from the set's "It Takes Two" days. But by the second season, it was replaced with a more appropriate Miami background. As for their sleeping quarters, Blanche had the master bedroom. It was her house after all, and she did have the most visitors (wink). Not to mention, she constantly alluded to there being a mirror over the bed (wink again.) It's commonly believed that Sophia's bedroom was fairly close to the kitchen, since the late-night discussions held there usually awakened a certain cranky Sicilian. Dorothy and Rose's rooms were fairly unremarkable. The outside of the house is interesting in its own right. For the first season, the exterior shots of the home were taken at a real house in Brentwood, California. According to several blogs like LA Snark and Miami Beach 411, the house is in a quiet neighborhood. From the second season onward, exterior shots were filmed at Walt Disney World's Hollywood Studios. They built an exact replica of the house in Orlando. Vacation-goers can actually see the house as a park attraction, where you would be taken on a tram tour of "Residential Street" which features other house exteriors. 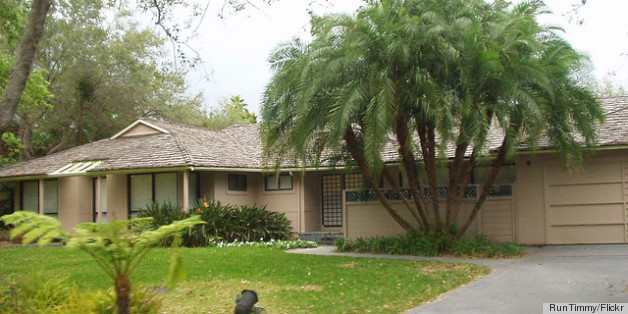 A look at the home on the Disney set. Flickr photo by RunTimmy. Right next door to "The Golden Girls" house was the house from "Empty Nest," which was fitting since that show was a spinoff of "The Golden Girls," chronicling the life of their widowed pediatrician neighbor Harry Weston (played by Richard Mulligan) and his daughters. This show in turn spun off the sitcom "Nurses," which also featured appearances by the ladies from "The Golden Girls." Now, "The Golden Girls" and the "Empty Nest" façades were torn down in 2003 and replaced with the "Lights Motor Action!" attraction.

Still, Dorothy, Blanche, Sophia and Rose will always be our favorite neighbors.

For a real-life look at how celebrities live off-set, check out this slideshow.