On Sun., Jan. 15, TV royalty was crowned at the Golden Globes ceremony. And although a fan favorite took home one of the big awards, it was largely a night of firsts: All the talent winners earned their awards for shows that have only been on for one season.

Find out who took home the evening's top honors for the small screen -- they're not what you'd expect -- and let us know what you think of the results!

BEST TELEVISION SERIES- COMEDY OR MUSICAL
Winner: "Modern Family"
Sofia Vergara may not have won Best Actress, but she did take the mic with the show's creator Steve Levitan, offering "thank you's" in both English & Spanish, as the rest of the ensemble cast smiled and laughed along with them.
Nominees:
"Enlightened"
"Episodes"
"Glee"
"New Girl"

BEST PERFORMANCE BY AN ACTOR IN A TELEVISION SERIES- COMEDY OR MUSICAL
Winner: Matt LeBlanc, "Episodes"
"Wow, I'm so nervous," LeBlanc said after a largely monotone acceptance speech. He then thanked the writers, noting with a laugh, "They write a Matt LeBlanc who, let's be honest, is way more fun and interesting than the real thing."
Nominees:
Alec Baldwin, "30 Rock"
David Duchovny, "Californication"
Johnny Galecki, "The Big Bang Theory"
Thomas Jane, "Hung"

BEST PERFORMANCE BY AN ACTRESS IN A TELEVISION SERIES- DRAMA
Winner: Claire Danes, "Homeland"
First and foremost, Danes thanked her parents, who she forgot to thank when she won the award in 1995 for her performance as Angela Chase in "My So-Called Life." Better late than never! She also thanked her husband, fellow actor Hugh Dancy, who, she said "keeps me sane and happy as I play someone not so sane and not so happy."
Nominees:
Mireille Enos, "The Killing"
Julianna Margulies, "The Good Wife"
Madeleine Stowe, "Revenge"
Callie Thorne, "Necessary Roughness"

BEST PERFORMANCE BY AN ACTRESS IN A SUPPORTING ROLE IN A SERIES, MINI-SERIES OR MOTION PICTURE MADE FOR TELEVISION
Winner: Jessica Lange, "American Horror Story"
"This is lovely. Thank you very much," Lange told the crowd. "I find it more and more rare ... every year to find a piece of work that is really beautifully written ... and it certainly was this." She gave a shout out to Ryan Murphy for convincing her to take on the role.
Nominees:
Kelly MacDonald, "Boardwalk Empire"
Maggie Smith, "Downton Abbey"
Sofia Vergara, "Modern Family"
Evan Rachel Wood, "Mildred Pierce"

BEST PERFORMANCE BY AN ACTOR IN A SUPPORTING ROLE IN A SERIES, MINI-SERIES OR MOTION PICTURE MADE FOR TELEVISION
Winner: Peter Dinklage, "Game of Thrones"
Crowd favorite Dinklage joked about his mom thinking Guy Pearce would win. "I just love our moms 'cause they keep us humble," he joked. He also thanked "Game of Thrones" author George, saying, "His prolific imagination is such a fun world to be a part of."
Nominees:
Paul Giamatti, "Too Big To Fail"
Guy Pearce, "Mildred Pierce"
Tim Robbins, "Cinema Verite"
Eric Stonestreet, "Modern Family"

BEST PERFORMANCE BY AN ACTOR IN A MINI-SERIES OR MOTION PICTURE MADE FOR TELEVISION
Winner: Idris Elba, "Luther"
"This is for the fans," the former star of "The Wire" said first and foremost. "I have the most loyal fans in the world." The British actor ended with a shout out to his daughter, having a Globes party at home. "We did it, Mama!" he exclaimed.
Nominees:
Hugh Bonneville, "Downton Abbey"
William Hurt, "Too Big To Fail"
Bill Nighy, "Page Eight"
Dominic West, "The Hour"

BEST PERFORMANCE BY AN ACTOR IN A TELEVISION SERIES- DRAMA
Winner: Kelsey Grammer, "Boss"
The leader of the Starz series thanked the producers for having the "insight, balls, and money to produce all eight episodes" as well as his wife, who, it was recently revealed, is pregnant.
Nominees:
Steve Buscemi, "Boardwalk Empire"
Bryan Cranston, "Breaking Bad"
Jeremy Irons, "The Borgias"
Damian Lewis, "Homeland"

BEST PERFORMANCE BY AN ACTRESS IN A MINI-SERIES OR MOTION PICTURE MADE FOR TELEVISION
Winner: Kate Winslet, "Mildred Pierce"
"I want to thank the Hollywood Foreign Press for putting me in a category with such incredible, heavyweight actresses who I feel honored to be alongside," Winslet gushed. "I share this with my beautiful children ... I'm so proud to be their mom," she said at the end of her speech.
Nominees:
Romola Garai, "The Hour"
Diane Lane, "Cinema Verite"
Elizabeth McGovern, "Downton Abbey"
Emily Watson, "Appropriate Adult"

BEST MINI-SERIES OR MOTION PICTURE MADE FOR TELEVISION
Winner: "Downton Abbey"
Up for four Golden Globes at the 2012 ceremony, "Downtown Abbey" nabbed one of the first big awards of the night. "How fabulous this is," EP Julian Fellows exclaimed. "I thank the audience because it's the audience that makes a success," he added.
Nominees:
"Cinema Verite"
"The Hour"
"Mildred Pierce"
"Too Big To Fail"

BEST PERFORMANCE BY AN ACTRESS IN A TELEVISION SERIES- COMEDY OR MUSICAL
Winner: Laura Dern, "Enlightened"
The third-time Golden Globe winner thanked "everybody in this room" and "everyone in the category who inspires bravery and humor in the most unlikely places."
Nominees:
Zooey Deschanel, "New Girl"
Tina Fey, "30 Rock"
Laura Linney, "The Big C"
Amy Poehler, "Parks and Recreation"

See what TV stars had to say on the red carpet: 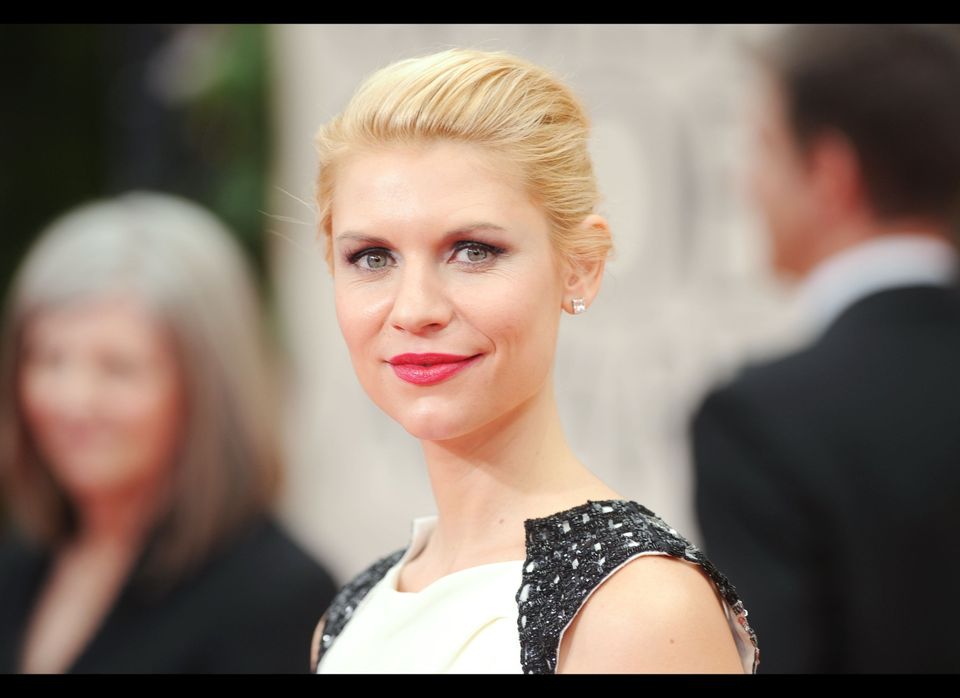 1 / 25
Claire Danes, "Homeland"
Dressed up in a gorgeous J. Mendel gown, the "Homeland" star and nominee told NBC, "I'm so excited to be here. I"m really really happy to be here." The actress brought her mom as her date. But after all the intensity of her Showtime political thriller, is she still nervous for the big Golden Globe moment? "Yeah, sure," she told Ryan Seacrest with a laugh. "We're having fun," Danes said about her night with mom.
Getty