Ben Affleck, whose directorial efforts on "Argo" were snubbed by the Academy of Motion Picture Arts and Sciences, which hands out the Oscars, experienced a double measure of vindication when he and the film scored huge Golden Globe victories for Best Director and Best Picture, Drama. "I don't care what the award is," he said while accepting the directing trophy. Then he thanked his wife, actress Jennifer Garner, for "sitting through this."

The show's producers pulled off a notable public-relations coup when Bill Clinton took the stage to introduce "Lincoln," giving Steven Spielberg's historical epic a boost of presidential credibility heading into the Oscar home stretch. "Wow, what an exciting special guest," co-host Amy Poehler said after the 42nd president left the stage. "That was Hillary Clinton's husband!"

Daniel-Day Lewis, the odds-on favorite to win Best Actor at next month's Academy Awards, won the Golden Globe for Best Actor in a Drama for his uncanny depiction of Clinton's predecessor in "Lincoln." "Her Majesty the Queen of England is about to parachute in in a minute to make a last-minute pitch for 'Skyfall,'" he joked in his acceptance remarks.

In another Oscar precursor, Jennifer Lawrence triumphed in the race for Best Actress, Comedy or Musical, for her portrayal of an eccentric young widow in "Silver Linings Playbook." After a humorous round of bragging -- "I beat Meryl!" -- she gave a funny, moving speech that included a requisite expression of gratitude to producer and awards-season master strategist Harvey Weinstein. "Harvey," Lawrence said, "thank you for killing whoever you had to kill to get me up here today."

Lawrence's chief competitor in the race for Best Actress at next month's Oscars, Jessica Chastain, won the Golden Globe for Best Actress, Drama. Chastain, whose character in "Zero Dark Thirty" never engages in such typical awards-friendly behavior as shrieking or weeping uncontrollably, said of director Kathryn Bigelow, "When you make a film that allows a character to disobey the conventions of Hollywood, you've done more for women than anyone gives you credit for."

Lawrence's co-star Bradley Cooper lost to Hugh Jackman in the Best Actor, Comedy or Musical, chase. Jackman, who lost 30 pounds to embody noble fugitive Jean Valjean in "Les Misérables," credited his wife, Deborra-Lee Furness, with encouraging him to stick with the project when he lost faith in himself. "I really felt I had bitten off more than I could chew. My wife talked me off that cliff, like she talks me off most days," he said.

As expected, Anne Hathaway won Best Supporting Actress in a Motion Picture for her portrayal of Fantine, an ill-fated factory worker forced into a life of prostitution, in "Les Misérables." "Thank you for this lovely blunt object that I will forever more use as a weapon against self-doubt," she said to the Hollywood Foreign Press Association, which administers the Golden Globe awards.

Lena Dunham had a big night, collecting the award for Best Series, Musical or Comedy, for HBO's "Girls" as well as Best Actress, Comedy or Musical, for her envelope-pushing portrayal of a mixed-up twentysomething New Yorker in the series. Accepting the acting award, she thanked executive producer Judd Apatow and called him "the greatest man, and the greatest honorary girl." As the music swelled, she added, "This award is for every woman who's ever felt there wasn't a space for her. This show has made a space for me." Dunham beat out a tough field of actresses, including hosts Tina Fey and Amy Poehler, who appeared shortly thereafter sipping strong-looking drinks. "Everyone's getting a little loose, now we're all losers," Fey remarked.

Quentin Tarantino was an upset winner for Best Screenplay, a category many assumed would yield an Oscar-foreshadowing victory for "Lincoln" screenwriter Tony Kushner. "This is a damn surprise, and I'm happy to be surprised!" Tarantino exclaimed as he claimed his trophy. Michael Haneke accepted the award for Best Foreign Language film for "Amour," which scored Oscar nominations last week for Best Picture, Best Director and Best Actress.

In the TV categories, the HBO miniseries "Game Change" and the Showtime series "Homeland" led the field with five and four nominations, respectively. "Homeland" won Best TV Series, Drama, for the second year in a row, beating out "Breaking Bad," "Boardwalk Empire," Downton Abbey" and "The Newsroom." "Maybe, maybe we just didn't screw it up," series co-creator Alex Gansa said, referring to claims that the show jumped the shark during its second season. "Homeland" star Damian Lewis won the award for Best Actor, TV Series, Drama, on a day when rumors of his possible departure from the show swirled, and Claire Danes won Best Actress for the second straight year. "I'm very proud to be working in this medium, in this moment, in this company," she said.

"Game Change," written by Danny Strong and starring Julianne Moore as vice-presidential hopeful Sarah Palin, racked up a string of awards, collecting victories for Best Miniseries or TV Movie as well as Best Actress in a TV Movie or Miniseries, for Moore, and Best Supporting Actor, for Ed Harris. "This was one of my favorite jobs, ever," Moore said of portraying Palin in the often scathing TV movie. (For complete coverage of TV winners, visit HuffPost TV.)

Tina Fey and Amy Poehler set the tone for the evening with a hilarious series of zingers, taking aim at everyone from former host Ricky Gervais, who, they claimed, "is no longer technically in show business," to Quentin Tarantino, whom Fey identified as "the star of all my sexual nightmares," to Anne Hathaway, whose performance in "Les Misérables" was the set-up for one of Fey's best jokes. "I haven't seen someone so totally alone and abandoned like that since you were on stage with James Franco at the Oscars." Poehler earned one of the night's biggest laughs when she referenced director Kathryn Bigelow's marital history with this gem: "I haven't really been following the controversy over 'Zero Dark Thirty,'" she said, "but when it comes to torture I trust the lady who spent three years married to James Cameron." Poehler and Fey also had some fun at the expense of the Globes themselves, comparing the Hollywood Foreign Press Association to the HPV virus and joking, ""Only at the Golden Globes do the beautiful people of film rub shoulders with the rat-faced people of television."

Christoph Waltz was the evening's first winner, taking home Best Supporting Actor in a Motion Picture for his portrayal of a bounty hunter in Tarantino's "Django Unchained." And Dame Maggie Smith won Best Supporting Actress in a Series, Mini-Series or Motion Picture Made for Television for her role as the Dowager Countess in "Downton Abbey." Don Cheadle was a surprise winner in the Best Actor, Comedy or Musical category, beating out Alec Baldwin, Louis C.K. and Jim Parsons on the strength of his work on Showtime's little-seen "House of Lies."

Robert Downey Jr. presented Jodie Foster with the honorary Cecil B. DeMille Award, which recognizes "talented individuals who have made an incredible impact on the world of entertainment." In her acceptance remarks, she acknowledged her homosexuality and offered a passionate defense of privacy. "Someday in the future, people will look back and remember how beautiful it once was," she said. Some listeners thought Foster had used to speech to announce her retirement, but she later told LA Times reporter Amy Kaufman, "I could never stop acting. You'd have to drag me behind a team of horses."

Adele accepted the award for Best Original Song on behalf of her James Bond theme, "Skyfall," and tipped her hand to the evening's festive atmosphere. "We've been pissing ourselves laughing," she said.

The Golden Globes awards ceremony takes place at the Beverly Hilton Hotel, its home since 1961. The awards are bestowed by the Hollywood Foreign Press Association, a group of mostly freelance journalists that was founded during World War II. More information about the organization can be found here.

Scroll down for a full list of winners as they are announced. A gallery of nominees -- and HuffPost's liveblog of the proceedings -- can be found below. 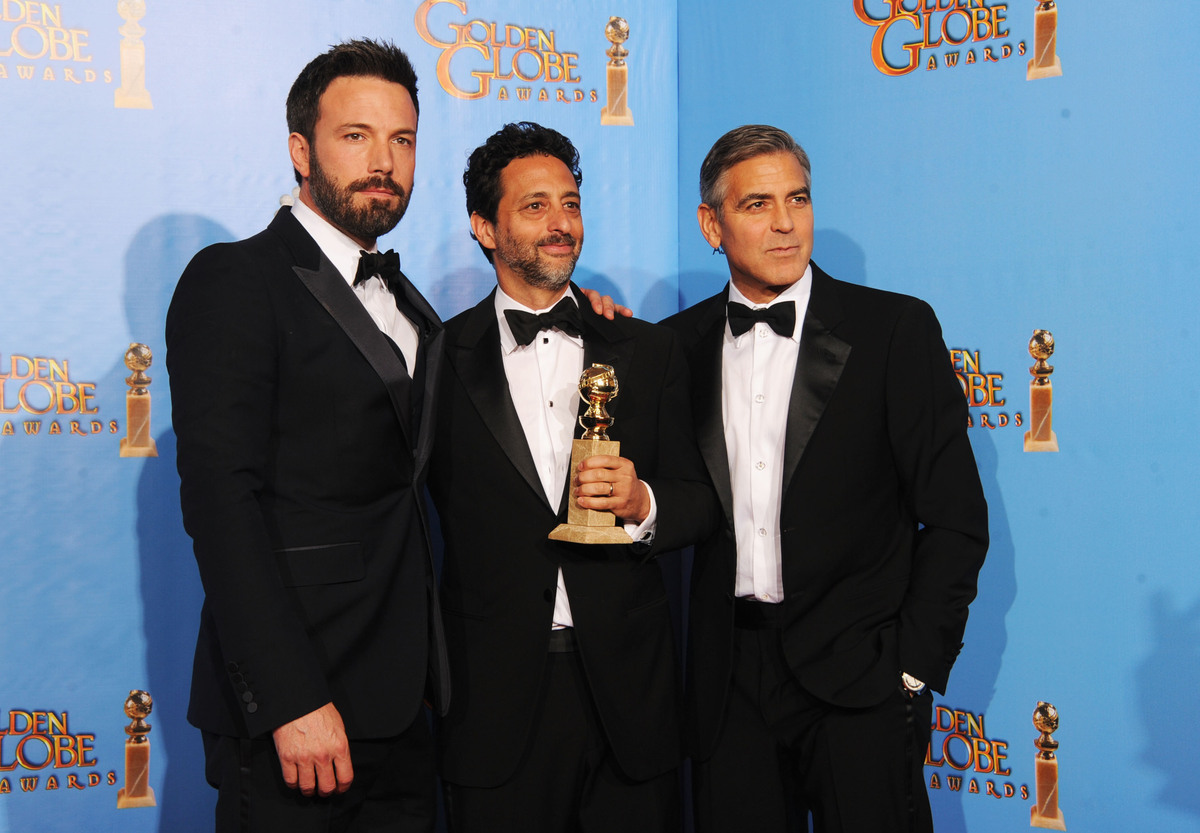