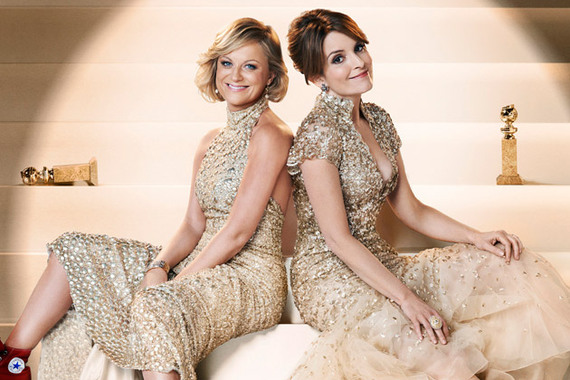 Last night we kicked off our pop culture awards season with The Golden Globes...and we started this year's round of Twitter parties where we talk about all the marketing.

My Twitter party started out with Live on the Red Carpet with E!, and then we switched over to NBC in time for Tina and Amy's big opener.

Big brand advertisers of the night seemed to be L'Oreal, Volkswagen, and Microsoft...including lots of commentary from many beauty brands trying to recreate red carpet looks. The Golden Globes claims to be The Super Bowl for women. Not sure about that, but it was still fun watching and commenting on all of the advertising and marketing activity.

Marketing aside, there were a few themes that emerged early in the evening, and continued through the telecast.

Nothing seemed off limits. Jokes about Bill Cosby and North Korea went right in for the kill. The humor was on the edge of being uncomfortable, but perhaps it's humor that can make the uncomfortable more talk-able. Apparently white dresses weren't off limits either. White is a tough color to pull off, and to be honest not many did. The red carpet needs color IMHO. But I'll leave that commentary for the Fashion Police, making their debut led by the fabulous Kathy Griffin. She's the only one who could take the place of Joan, again IMHO.

Upsets. From the very beginning, it seemed as if none of the usual suspects were winning. While I would never admit to being completely on top of these pop culture winners and losers, it was fun to see the unexpected give acceptance speeches. And they were quite good, some of them anyway. As a fellow father, I think Michael Keaton's acceptance speech was best in show (not that he was necessarily an upset).

Perfect timing. J.Lo's red carpet arrival perfectly timed to her new movie trailer. Tina and Amy's new movie trailer right before they take the stage to open the show. Disney's Cinderella coming right off the heels of Into the Woods. It was a night of well-timed marketing, as you would expect. And that doesn't even include on all the tweeting. See, we did focus on the marketing as well as the fashion and the awards!

Freedom of Speech. Maybe it was the events in France over the weekend, but it sure seemed like the big winner of the night was Freedom of Speech. As well it should. Terrorism and fear shouldn't keep us from saying what's on our mind. Or expressing it creatively. Nor should societal judgment or bullying for that matter.

Best moment of the night: Transparent. To love! Indeed! Note all of the above.

Speaking of love, I loved being with my Twitter party participants. We've been doing it for several years now, with The Golden Globes giving us a warm up for The Super Bowl, The Grammy's, and of course The Oscars.

Lots of fun, and no matter what anyone says ... nothing to disappoint. Not when it's a shared experience.