The other night, during The Golden Globes, a friend tagged me on Facebook and pointed me to comedian Barry Sobel's page. Sobel's been an icon on the stand-up scene for more than two decades. His accolades include writing jokes for Jimmy Fallon and Tina Fey during their inaugural season at SNL as well as developing the jokes for Tom Hanks' character in the movie Punchline. He's also a regular on the national club circuit. Translation: He gets around.

Immediately after hosts Fey and Poehler did their Bill Cosby routine -- their most talked-about bit of the night -- Sobel's Facebook page lit up with dozens of folks posting that the duo did his routine, almost verbatim.

Apparently, Sobel did that exact bit on Cosby and the numerous rape allegations as early as Dec. 21 at Cobbs Comedy Club in San Francisco. The promoter of the club also took to Facebook to mention it, and Sobel's phone was inundated with texts and tweets from a dozen fellow comedians, including one from Kabir Singh, winner of The San Francisco Comedy Competition, who was there the night he debuted it.

In the wake of all the praise being given to Fey and Poehler, one user went as far as to create a comic strip depicting the situation: 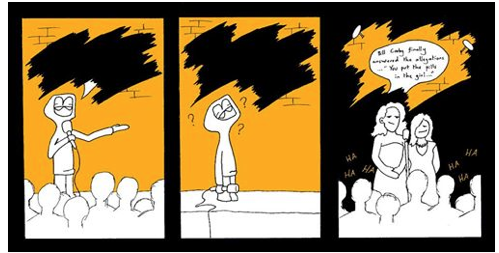 However, because we now live in an age where even though 100 people may all say the same thing, unless we see it for ourselves, it's all bullshit. Thus, until such time as a cell phone video from Sobel's performance surfaces, it's up to you to be the judge.

Fey and Poehler's joke was: "Bill Cosby finally answered the allegations. (Bill's Voice) You put the pills in the people..." Etc. Etc.

Ideas. They're not easy to come by. Especially the good ones.

In the mid-'90s, there was a sign on the door of a long-time radio promoter who worked for Atlantic Records that said, "Creativity is the ability to forget who you stole your ideas from."

I never forgot that because it's true. What's also true? The bigger the success the more people will say it was their idea. Just Google "Titanic" and "lawsuit" and you'll come across dozens of links to various parties claiming they were ripped off in one way or another. Most of them bogus, but the others, who knows?

It's no different in comedy. Joke-writing is a serious business. And a fiercely competitive one. Just ask any comedian. When it comes to the business of being funny, even giants like Johnny Carson were not immune to accusations of joke theft. It's hard to prove, but also hard to disprove. Especially when, say, the Tonight Show writers would -- and still do -- frequent the hottest comedy clubs in town. What's to stop them from seeing a bit they think is funny and offering it up to their boss as their own creation? Currently, the only thing protecting the innovative comic from having his/her joke "borrowed" is the unspoken gentleman's agreement that you don't do another guy's joke.

The wide-spread practice of comedic plagiarism as its own art form was even put onto celluloid in the classic Scorsese film The King of Comedy, in which talk-show host Jerry Langford, played by Jerry Lewis, says to struggling comedian Rupert Pupkin, played by Robert Deniro, "A very funny man said something once -- which I later originated..."

I spoke with Sobel about the situation and, surprisingly, he's not mad.

"I love Tina and Amy and I'm sure they had no idea the joke they were doing was mine," he says. "Comedy is a small world, and many times the writers on a show, especially one as big as The Globes, will reach out to anyone and everyone they know for help. Sometimes things get 'passed along' simply because they're funny, without giving credit to who wrote it. I just want people to know it was my joke."

Considering the aforementioned concept of comedy being a cut-throat business, and the fact that Time magazine is heralding Tina and Amy's version as "the right way to make a rape joke," you can't blame Sobel for wanting credit.

What shouldn't be lost in all of this is that, much like the Cosby situation, there seems to be plenty of witnesses but no "proof." (Wink.) 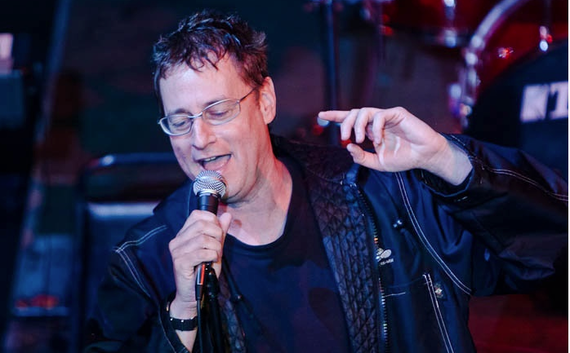