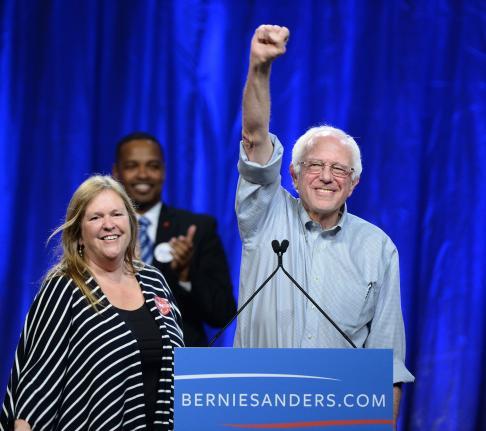 "Rachel Maddow: Now that he [Sen. Sanders] has this massive national, indeed international profile...do you see an organization being formed out of the Sanders-centered movement that has sprung up around the campaign?

Jane Sanders: Yes! That's always been the intent. I mean as he said right from the beginning, it's been a 2-pronged approach. The most important thing is not electing Bernie President. The most important thing is starting a political revolution...If he's the nominee, he wants people outside working with him to effect real change. If he's not the nominee and not the President, that becomes even more important, because we need to make sure that the agenda that 9 million people have been very excited about, and a lot more couldn't vote for yet...moves forward."

Thank you, Jane, for articulating the vital need to build on the golden opportunity created by the historic success of the Sanders electoral campaign to create a permanent organization of progressive activists, the likes of which America hasn't seen in decades, if ever.

I would add, the time to begin is RIGHT NOW.

It may be hard to walk and chew gum at the same time--to continue the presidential campaign up to the convention while simultaneously beginning to organize a national organization to carry the political revolution into the future.

But if the long-term work doesn't begin now -- and is over-shadowed by the short-term needs of the remaining primary contests and the Convention -- the momentum will slow and an historic opportunity could be lost.

So here's my plea to Bernie, Jane, and the Sanders campaign: Launch the second prong of the political revolution immediately--building a permanent national mass organization of the democratic socialist/social democratic/progressive left.

• Bernie announces at a series of mass rallies, and in media interviews, that the political revolution will not end with the Democratic convention or fall election, but win, lose, or draw, will transform into a permanent mass organization.

• Bernie announces that the campaign will fund several million dollars from its massive war-chest for start-up costs, and will use its mailing list to raise more. (The Sanders campaign shouldn't spend it's last dime on California TV ads, but should leave some money for funding the new organization, as well as doing some targeted fundraising just for that purpose--I'm confident many campaign donors would cough up more money for the costs of making the political revolution permanent.)

• The campaign uses some of those funds to assign organizers on the national, state, local, and campus level to build the new organization, even hiring back some of the recently laid-off staff from states who've already held their electoral contests.

• An initial organizing meeting would be held in Philadelphia, simultaneously with the Democratic Convention.

• Between the Convention and the General Election, the start-up organization would encourage supporters to engage in electoral activities. For some, this would involve doing everything possible to stop the authoritarian, racist Donald Trump from becoming President. For others, it would involve supporting progressive Senate, House, state and local candidates like Russ Feingold's Wisconsin Senate run in Wisconsin, and the House races of candidates like New York's Zephyr Teachout, Nevada's Lusy Flores, and Washington's Pramila Jayapal. In addition to electoral activities, it would encourage supporters to engage in direct action, like supporting the Verizon strikers.

• Simultaneously, intensive work would begin to build a network of supporters and chapters in cities, towns, neighborhoods, workplaces and college campuses around the country.

• This would all lead up to a founding convention in Washington around Inauguration Day to officially form the organization, ratify a policy platform, elect a national steering committee, and reach agreement on an agenda of initial organizing priorities.

The organization would have a dual inside/outside strategy, engaging in both electoral activities and mass protest politics. On the one hand, it would work to elect true progressives at every level of government from dog catcher, to city council, to state-wide office, to national office. On the other hand, it would organize direct action for civil rights, union rights, stopping climate change, and opposing needless military adventures, sometimes even engaging in non-violent civil disobedience.

It would also ally with other like-minded organizations who might not want to dissolve themselves into the new organization.

For example, a coalition of existing progressive organizations--including National Nurses United, People's Action, Progressive Democrats of America, Working Families, Friends of the Earth, and Presente.Org-- have called for a "People's Summit" in Chicago June 17-19 to develop a People's Agenda "further deepening the relationship between participating organizations". Many of these organizations have done heroic work, holding up the banner of progressive values during an era of bipartisan neo-liberalism. (I'm a member of, and have supported, several of them myself.) In addition, a group of laid-off Sanders campaign workers just announced a new organization called Brand New Congress to attempt to elect a progressive Congress in 2018.

I support all of these efforts. But after a lifetime in progressive politics, I have doubts about the ability of existing organizations to scale-up to the level of massive grassroots participation mobilized by the Sanders campaign--Nearly 10,000,000 votes and counting, nearly 2,000,000 donors, tens of thousands of volunteers.

The Sanders campaign has a scale and level of financial and organizational resources to create a new permanent inside/outside mass progressive organization that could surpass the size and influence of any existing organizations, even as it builds alliances and coalitions with existing groups.

As Jane Sanders said, it's would be the second prong of the political revolution

And the time to start is IMMEDIATELY.