GoldieBlox: Ugh. Let me tell you a story.

Last week, my Facebook feed was teeming with this video: a truly fantastic marketing effort with a clear message -- we are girls, we want to play with building toys that are not pink. Got it. But then, GoldieBlox proposes that my girl play with their "specially-designed for girls" construction toy. I looked at the toy, and I got this intense feeling, right in the center of my gut, which goes along with a face in which my mouth pouts forward, its sides fall down and my forehead contracts into a series of significant lines that announce the time for Botox might finally have come. This is not a good feeling. It is the feeling that my female spirit has been crushed in some way I couldn't quite yet verbalize... the toy just seemed simple and dumbed down compared to what I have seen in my 10 years of parenting a boy.

The Eureka moment was facilitated by guess who? My 6-year-old daughter. After work, homework and dinner, we sat on the rug to play, just like we do most evenings. Today, she picked up the Sky Rail, a well-reviewed, time-tested, marble-run building toy for boys, which belongs (or belonged) to her 10-year-old brother (he has moved on to programming robots). We know that this toy is decidedly for boys because the box features two boys, wearing all-time boy colors of blue and light blue, smiling proud at the loopy, ingenious roller coaster that certainly provided hours of creative discovery for them, and will likely serve as a building ground for understanding of physics, construction, material sciences, innovation, leadership and teamwork. It is a freaking boy toy. Look at the box: 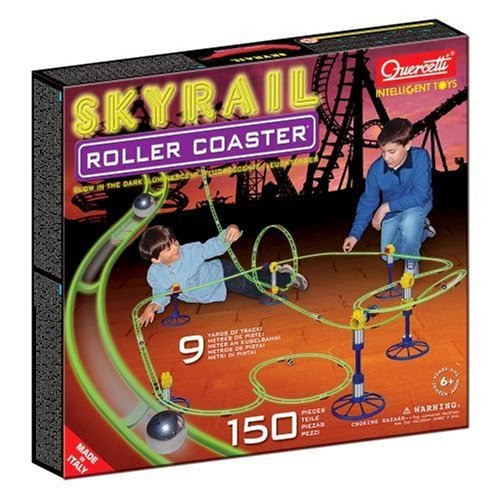 But my decidedly female daughter, with long hair and female body parts, opened the box to the boy toy, put it in the center of the rug and began building with the boy toy. She successfully clicked the boy pieces together, and after several trial-and-error attempts, she calculated the height of the boy suspension bridges needed to support the boy toy marble run. She took a boy toy marble, and gave it a good-girl try. The boy toy marble traveled through half of her boy toy structure and then abruptly flew off the rail. She made building adjustments, adding a few additional boy toy rail pieces, and tried again. The boy toy marble went for a second run and this time traveled all the way through the sky rail, landing perfectly into her pink jewelry box!!! She was victorious. She was delighted.

And that is when it hit me! GoldieBlox is treating my girl like she has a disability: SHE IS A GIRL.

See, by being born a girl, my daughter does not possess a special disability that prevents her from playing with regular or boy toys. But GoldieBlox seems to be telling my girl that she is too girl to play with the myriad of award-winning (boy) toys in the market (favorites: LEGO, Mindstorm, Quercetti Rails, ThinkFun, Chess, Battleship, Blokus).

Picture this ridiculousness in the real world, in the other myriad of decisions we make each day:

You see? GoldieBlox is telling me that my normally-developing girl needs special accommodation. ACCOMMODATE ME: I AM A GIRL!

Let's go further. After a girl who does not require accommodation is accommodated one too many times in her early life, that girl may begin to expect to be entitled to such accommodations for the REST of HER LIFE. If a girl has special accommodations for being a girl in play, might she not also expect them in school and work? Then, we are setting her up to fail.

I understand the need to sometimes separate male and females, as it happens in most sports. I get it. But I cannot ever support this segregation in play, academics, or work. The path to success for our girls, in my opinion, is in INTEGRATING GIRLS INTO THE ALREADY EXISTING WORLD which may be, in some fields like the one in which I work, CURRENTLY (but not forever) dominated by men.

I don't yet have big answers on how to integrate women into male-dominated fields, but this is what I am doing for my daughter:

And, yes, her closet still looks like a pink explosion, but there is occasional green, orange and blue in the mix!

So, GoldieBlox: Great marketing. Congratulations. A really good try. We don't want pink toys, and we want girl engineers. But let's use your talents to integrate girls into the already existing world. Don't dumb it down. Don't water it down. I want you to succeed.

This piece first appeared on www.sandrashpilberg.com.

CEO of Seeker Health, writer, student of mindfulness and humanity