Debbie Sterling wants to re-engineer the world, one girl at a time. A Stanford engineer who spent her childhood years thinking "engineering was nerdy and intimidating and just for boys", she was inspired by a statistic (trumpeted on her Kickstarter page, "only 11 percent of engineers are women and girls start losing interest in science as young as age eight!") and has made it her mission to move some numbers via "GoldieBlox", a feminine-styled engineering toy set that, in broad terms, could be thought of as pastel-painted, round-edged Legos for girls.

Right now, Sterling estimates that the first toys will be released to $30-and-up Kickstarter backers in February 2013: subsequently, the toys will retail from her website for $29.99. She plans to release additional GoldieBlox sets and storybooks later in 2013, and says she's "already sketching".

Here's what Sterling had to tell us, via email, about the toy she hopes will help change the gender ratio in tech, science and engineering:

Your Kickstarter said you've spent your entire life savings -- that's bold! What made you commit so much to this?

I’ve committed so much to this because as corny as it sounds, I truly believe it is the reason I was put on this earth. When I started working on the idea, it quickly turned into an obsession. I left a comfortable, well-paying job because literally ALL I could think about was solving this problem of getting more girls into engineering. People say when you find your passion, “you know.”  In my case, that is entirely true.

You mention that a toymaker, an IDEO employee, and the makers of Pictionary all helped with this product. Before we ask how they helped, how did you even meet those people?

Last February, I attended a social entrepreneurship retreat called “StartingBloc” that changed my life. There, I was incredibly inspired by other entrepreneurs who taught me that in order to achieve your dreams, you need to identify the right mentors to help you get there, and relentlessly stalk them until they agree to help you. That is exactly what I’ve done. For example, one of my advisors is Jennifer Siebel Newsom, a highly respected women’s activist and creator of the film, “Miss Representation.” I was researching her online, and found out about a screening of her film where she’d be attending for a Q&A. I went to the screening and as soon as it was finished, literally ran onto the stage and practically knocked her over! After about a minute of rambling, she agreed to have coffee with me and the rest is history.

Along a similar vein, I met my industrial designer by crashing an “Industrial Design Society of America” happy hour and mingling around until I found the perfect match.

Okay, it's pretty easy to guess how the toymaker helped you -- but how did the IDEO people and the makers of Pictionary pitch in?

The founder of Pictionary has been helping me tremendously since day one. When we first met, I had a sketchbook full of toy concept ideas. He pointed at my sketch of the GoldieBlox book/toy and said, “This is the one.” Ever since that moment, he’s helped advise me on product design and development, business formation, intellectual property, you name it. He even got me a pass to sneak into Toy Fair last February and get a lay of the land. We collaborate together at least every couple of weeks.

I met the head of toys at IDEO recently and he loved GoldieBlox so much, he agreed to be an advisor. He’ll be clutch when it comes time to explore the product development strategy based on the reactions of customers. IDEO is the mecca of user-centered design.

The spinning machine is a more fun way of saying “belt drive,” which is Goldie’s first machine. I started with this machine because I was trying to explore mechanisms that involved rotating 3D objects in space, in hopes it might lead to spatial skills development. But rather than just make a belt drive, which isn’t inherently that fun, I came up with the idea to seat little characters on the tops of wheels. I was inspired by my favorite ride at Disneyland – the spinning teacups.

Have you done any sort of focus groups with young girls to see what they think of GoldieBlox? How have they reacted?

I tested GoldieBlox with over 100 girls and the reaction was overwhelmingly positive! Going into it, I wasn’t sure if they’d just hate it entirely, or love the book but ignore the building component, or vice-versa. I found that the book totally engaged them and got them excited to build along with Goldie. They liked Goldie, they wanted to be like her and do what she does. It was fascinating to watch the girls mimic the storyline. For example, in one part of the book, Goldie’s animal friends line up for their turn on the spinning machine. Many of the little girls we tested on actually took the character figurines and lined them up on the board, just like in the book. I got to watch the girls problem solve through the book, and it wasn’t always easy, but the moments of joy when they figured it out would always bring tears to my eyes.

Can GoldieBlox, AKA Legos For Girls, Entice More Girls To Be Engineers? (PHOTOS)
GoldieBlox: Photos Of The New Toy 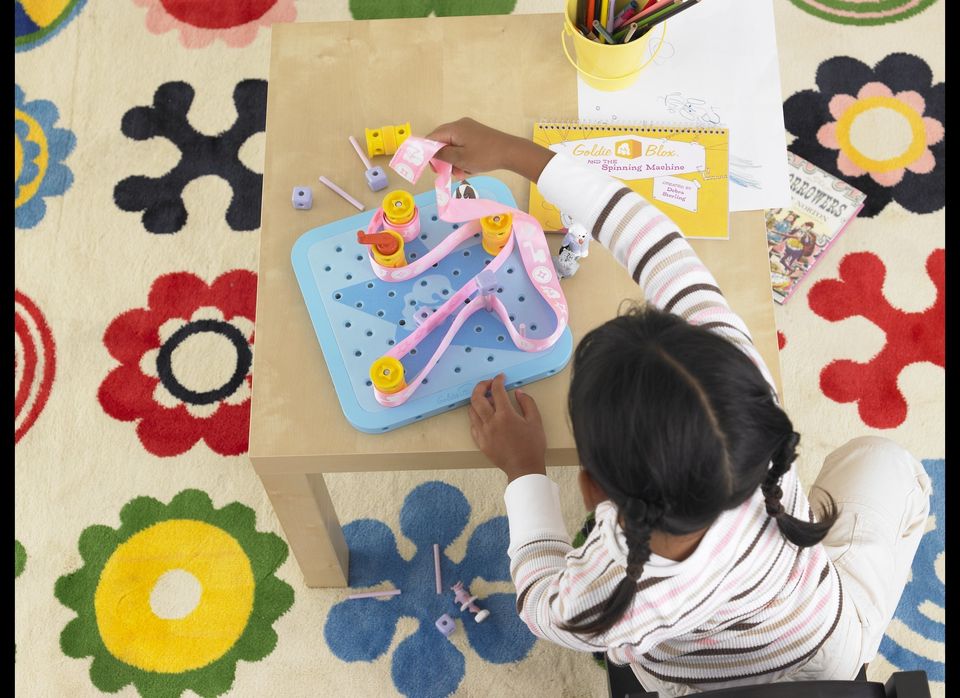