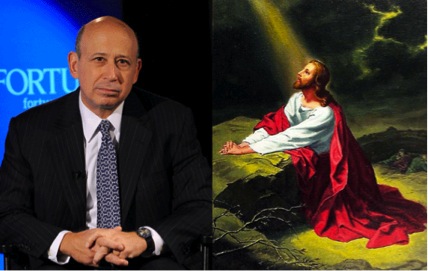 Doing God's Work: Can you spot the difference?

It's OK for firms to make money. That's what they're there to do. But real firms, durable ones, the ones who care about their reputation, their future, and the generations that come after, have figured out that you need to take care of yourself by taking care of your customers. Do the second thing right and the first will come of its own sweet accord.

Greg Smith's recent wail of resignation made it clear that Goldman Sachs has long lost touch with these simple truths. In his words, 'It makes me ill how callously [Goldman staffers] talk about ripping their clients off.' The thing is, though, you don't have to be a client of Goldman's to lose out, you just have to be, well, a human -- or at any rate a human whose assets amount to more than a mud hut and a couple of scrawny cows.

Because this is a financial story, we need to start with the money. As of December 2011, Goldman Sachs owed $814 billion. That's more money than is owed by all but five of the European Union's 27 members. Indeed, that's hardly putting it strongly enough. Spain owes somewhat more money than Goldman Sachs, but is almost buckling under the pressure. Not Goldman. If Goldman wanted to raise more capital and expand its balance sheet, it could easily do so. Spain couldn't. That's how big the firm is. How big and how powerful.

How you use such power matters and unfortunately Goldman's sticky fingers are all over the scene of recent economic crimes. Take the meltdown in Greece, which brought the world to within a whisker of financial catastrophe last fall. Part of the problem there was that Greece kept fiddling its data: it lied to European officials about the true extent of its borrowing. Those lies needed some help and Goldman -- how unsurprising is this? -- was there to provide it. In the words of Der Spiegel, 'Goldman Sachs helped the Greek government to mask the true extent of its deficit with the help of a derivatives deal that legally circumvented the EU Maastricht deficit rules. At some point the so-called cross currency swaps will mature, and swell the country's already bloated deficit.'

Or, to put it simply, Greece wanted to lie about its finances, at huge cost to its taxpayers and to the world economic system, and Goldman was on hand to make it happen. Goldman reportedly made a gross profit of €600 million on the trade.

But we don't have to travel overseas to find economic crimes sticky with Goldman's prints.

During the financial crisis of 2008-09, the American government bailed out insurance giant AIG at a cost of some $182 billion. Those billions flowed largely to various Wall Street firms, including Goldman. For a long time, Goldman protested that the money ($12.9 billion) it received was simply passed on to clients ... until, oh gosh, the facts proved otherwise. It turned out that in fact Goldman collected $2.9 billion for its own account. And that's $2.9 billion of pure profit.

You need to notice two things about this. First, where the money ends up -- Goldman guys with huge bonuses -- but secondly the amazing wastefulness of the system. Taxpayers shelled out $182 billion. Goldman pockets just under $3 billion. Some of those surplus billions went to other Wall Street firms, but much of it went to support foreign banks and foreign bankers. American taxpayers should not be called upon to support failed businesses in other countries, but the Goldman merry-go-round wouldn't have worked any other way, so to hell with the American taxpayer.

And who engineered this bailout? Why, none other than Goldman old boy, Hank Paulson. Who avoided some $200 million in personal taxation when he become US Treasury Secretary -- a gain which puts into the shade his mere $40 million annual compensation while at Goldman.

Not that, mind you, it makes much sense to obsess about a few billion dollars snatched from the American taxpayer, when the real rip-off ran to the hundreds of billions of dollars. A July 2011 report from the US General Accountability Office found that the support for Goldman Sachs in total amounted to some $814 billion. Or approximately the quantum of Goldman's entire liabilities. You want a rip-off, that's it right there.

Or take other economic crimes against humanity. When broker MF Global went bust -- because of excessive leverage and a reckless approach to risk -- it turned out that its clients' money had gone walkabout. As of today, according to Reuters, 'MF Global U.S. trustee James Giddens is trying to track down an estimated $1.2 billion of customer assets that have seemingly disappeared from the broker's books.' What idiot could lead a firm to such a horrendous collapse? Why, a Goldman guy, of course: stand up Jon Corzine, former senator, former NJ governor and former chairman and CEO of Goldman.

We could go on. Robert Rubin, formerly co-chairman of Goldman Sachs, became US Treasury Secretary under Clinton and piloted through the repeal of the Glass-Steagall Act and helped to exclude OTC credit derivatives from oversight by the Commodity Futures Trading Commission. Those things might sound arcane and technical, but they stand at the very epicenter of the 2008-09 financial crisis. If credit derivatives had been strictly regulated, and a strong version of Glass-Steagall had remained in force, Main Street would not have been required to bail out Wall Street. Lehman could have folded, Bear Stearns and Merrill could have folded or been bought up for a handful of nickels -- and no one would have cared. These things did not have to affect your life, your job, your wage, your savings or your pension fund. (If you were the guy with the mud hut and the scrawny cows, you probably did just fine, however.)

Or take Mario Draghi, formerly vice chairman and managing director of Goldman Sachs International. As incoming head of the European Central Bank, Draghi has been responsible for pouring €1 trillion of easy money into a tottering European banking system. You can call that a rescue operation if you like -- but what exactly is being rescued? The collapsing banks and irresponsible governments most responsible for the current crisis. The firms and institutions who form Goldman's crucial European client base, in fact.

We could go on. Sometimes it's (alleged) crimes that you notice: people like Rajat Gupta, former Goldman Sachs director, currently under arrest on charges of insider trading. But more, it's the extent of the firm's influence. Not only does it seem to be the preferred supplier of US Treasury Secretaries, its alumni pop up seemingly everywhere. The current Prime Minister of Italy, Mario Monti, is a former Goldman adviser. Or check out the resumes of Petros Christodoulou, Peter Sutherland, Otmar Issing, Antonio Borges, Bob Zoellick. Important people, who have taken fistfuls of money from Goldman Sachs. Important people who have, to a remarkable degree, supported and defended the reckless leverage and opaque accounting of a system from which Goldman draws its colossal profits. The influence reaches far past matters of country, party or ideology. The only ideology which matters is that of self-enrichment. That of allegedly ripping off clients.

It's time to put a stop to this. In Britain, a firewall is (slowly!) being erected which will, in effect, build a Glass-Steagall-style barrier suited to the twenty-first century. The United States needs just such a barrier, and neither the watered down version of Dodd-Frank nor the current shenanigans over the Volcker Rule promise to provide one.

But regulatory barriers are only half the story. The corruption of excess influence also needs to be terminated. No US Treasury Secretary with strong links to Wall Street should ever again be appointed. No central banker with a past in casino capitalism should be trusted to keep his instincts at bay when placed in charge of a national (or international) currency.

Wall Street will argue that such a policy would be reckless in the extreme: you might get a Treasury Secretary who didn't fully understand credit derivatives or the subprime mortgage game. And that's perfectly true. You might. Which would be an unmixed blessing. Opaque financial products that normal smart people don't understand? We didn't want the damn things in the first place. Soft loans to weak banks in support of crumbling governments? Who the heck would vote for that?

Not me. Not you. No one beyond those on Wall Street. It's time that the excessive influence of a single wealthy firm was halted. Let's just say no.

Mitch Feierstein is the author of Planet Ponzi and CEO of the Glacier Environmental Fund.