Extended unemployment benefits are not to blame for high unemployment, according to research by investment firm Goldman Sachs.

"Some commentators have argued that extended unemployment insurance (UI) benefits are the key reason for high unemployment in the United States," says the report, released to clients last week and made available to HuffPost on Wednesday.

Goldman's researchers find that extended unemployment benefits, which provide up to 73 weeks of federally-funded aid beyond the standard 26 weeks provided by states, account for a half-point increase in the unemployment rate.

The Goldman report specifically mentions an August Wall Street Journal column by Robert Barro, who argued that the unemployment rate would be as low as 6.8 percent if it weren't for the "folly of subsidizing unemployment."

No way, says Goldman. Its researchers report that their conclusions are "broadly in line with a recent study by the San Francisco Fed," which has been publicly available since April. The Federal Reserve's Bay Area office found that without extended benefits, the unemployment rate would have been just slightly less than half a percentage point lower: "Analysis of unemployment data suggests that extended unemployment insurance benefits have not been important factors in the increase in the duration of unemployment or in the elevated unemployment rate," the Fed study reports.

Nevertheless, many politicians -- mostly Republicans -- spent 2010 arguing that extended unemployment benefits undermine economic recovery because the jobless would rather collect checks than take available jobs. "I'm opposed to giving people money for doing nothing," former House Speaker Newt Gingrich said in December, in one such statement.

The Goldman report notes that unemployment benefits in the U.S., which average about $300 per week and typically replace less than half a worker's former pay, are less generous than in other countries.

US Daily: Extended Benefits Are Not the Main Source of High Unemployment (Stehn)

Some commentators have argued that extended unemployment insurance (UI) benefits are the key reason for high unemployment in the United States. Using data from 20 OECD countries we present evidence to the contrary. Our results suggest that only ½ percentage point of the current 9.4% jobless rate can be explained by the extension of UI benefits. Moreover, our calculations suggest that this effect will fade when the extended benefits eventually expire. These estimates--broadly in line with a recent study by the San Francisco Fed--reinforce our view that the overwhelming share of unemployment is cyclical rather than structural.

As part of the fiscal compromise package signed into law at the end of last year, extended unemployment insurance (UI) benefits were renewed for 13 months, until the end of 2011. Individuals in most states are thus eligible to receive UI benefits for up to 99 weeks, well above the normal level of 26 weeks.

Whether and to what extent extended UI benefits have contributed to the high rate of unemployment in the United States has been a topic of debate. On the one hand, Harvard economist Robert Barro calculated last summer that unemployment would be almost 3 percentage points lower if jobless benefits had not been extended to 99 weeks. (See "The Folly of Subsidizing Unemployment," The Wall Street Journal, August 20, 2010.) On the other hand, economists at the San Francisco Fed found that the unemployment rate would be only 0.4 percentage points lower in the absence of the extended benefits. (See "Extended Unemployment and UI Benefits," FRBSF Economic Letter, 2010-12, April 19, 2010.)

Gauging the effect of UI benefits on the unemployment rate is challenging because benefits are typically extended during times of high unemployment. For this reason a number of previous studies have explored the implications of UI benefits for a group of OECD countries to take advantage of differences in benefits between countries. (See, for example, Stephen Nickell and others, "Unemployment in the OECD since the 1960s. What do we know?" The Economic Journal, 115, January 2005.)

Following these studies, we explore the effect of the extension of UI benefits in two steps.

We then estimate a simple panel regression model for 20 OECD countries using annual data between 1970 and 2007 to explore the effect of the benefit replacement rate on unemployment. In particular, we run a regression in which we explain the jobless rate with (1) the one-year lagged unemployment rate; (2) the OECD's estimate of the output gap as a measure of the cycle; and (3) the benefit replacement rate. (Moreover, we allow for variations in the unemployment rate that are unrelated to UI benefits--due to either country-specific circumstances and/or global shocks--by including so-called "fixed effects".)

The table below presents our results. We find that a 10 point increase in the replacement rate--broadly similar to what we saw during the Great Recession in the United States--is associated with a 0.2pt increase in the unemployment rate in the same year. Given the persistence in unemployment, the effect ultimately grows to just above 1 percentage point if the extension of the benefits is permanent (calculated as 0.2 divided by (1-0.83)). These estimates suggest that the unemployment rate is currently ½ percentage point higher due to the extension of the UI benefits than it otherwise would be. (As we are roughly in the third year of the UI benefit increase this figure is calculated as 0.2+0.83*0.2+0.83^2*0.2). Our estimates are thus similar in magnitude to the San Francisco Fed's study but much smaller than Robert Barro's. 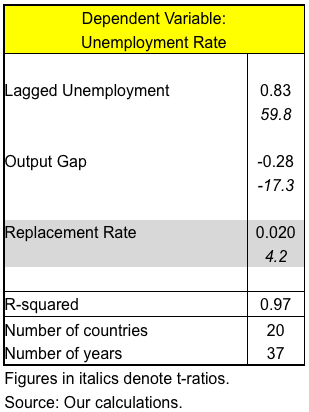 Our simple regression, however, is subject to a number of caveats. First, our setup might still suffer from the possibility that countries increase the generosity of UI benefits in response to rising unemployment. This "reverse causality" problem, however, would bias the estimated coefficients upward, implying that the effect of higher benefits on unemployment would be even smaller if we could adequately control for this problem. Second, the magnitude of the effect of UI benefits on unemployment is sensitive to the sample period. Considering a more recent time period, however, reduces the size of the effect: for example, the coefficient almost halves for a sample starting in 1980 instead of 1970. Finally, our very simple setup leaves out many other institutional variables that might affect the rate of unemployment, including employment protection laws, the tax burden and the prevalence of trade unions. Studies that include such variables, however, find broadly similar effects. Stephen Nickell and others (cited above), for example, obtain almost identical effects to ours in a much richer model.

We conclude that merely ½ percentage point of the current jobless rate can be explained by the extension of UI benefits. Moreover, our estimates suggest that this effect will fade when the extended benefits eventually expire. These findings reinforce our view that the overwhelming share of unemployment is cyclical rather than structural.