In this day and age, we've come to expect to see images of U.S. presidents gracing gossip websites and the covers of tabloid newspapers. But rarely, as it was recently, is golf at the heart of the discussion.

After breaking briefly from a two-week vacation on Martha's Vineyard to publicly address the savage beheading of American journalist James Foley at the hands of Islamic State militants, Barack Obama headed straightaway to Vineyard Golf Club for a round of golf. Photos showed him on the course, grinning and fist-bumping with the likes of former NBA star Alonzo Mourning and millionaire investor Glenn Hutchins.

Critics from both sides of the political spectrum said the president's actions were "tone deaf" and in "bad taste." Deputy White House Press Secretary Eric Schultz had to come to his boss's defense, saying "sports and leisure activities are a good way for release and clearing of the mind."

No matter where your opinion falls on this particular controversy, one thing is clear: Something like this would never happen in China. Because high-ranking Chinese officials know if they get caught on the links, it would be political suicide.

China has always had a complicated relationship with golf. Mao banned the game in 1949 when the Communists took power, denouncing it as the "sport for millionaires." Even today, those Chinese who have heard of golf likely know it as the "rich man's game," and in China that's precisely what it is. It's a prohibitively expensive pastime (an average round will cost you more than $150) in a country where nearly a billion people live on less than $5 a day. In fact, so ingrained is golf's image as an elitist pursuit, the Chinese Communist Party has been known to send notices to cadres warning them not to play, lest they be labeled corrupt. Some Western journalists even branded golf "green opium," a dangerous import that Chinese leaders believed to be a gateway to further decadence.

Perhaps now more than ever, thanks to President Xi Jinping's ongoing crackdown on government corruption, golf remains a taboo topic for China's political elite. Put simply, there's no way Chinese officials should be able to afford to play golf in China. Their salaries are modest (last year, it was reported that the annual salary for Xi himself was just $19,000) and, while most Chinese assume that all government officials have other sources of income, regularly playing golf would be a rather conspicuous admission of impropriety.

"Golf as 'green opium' ... a dangerous import ... a gateway to further decadence."

Now, we all know many Chinese officials are indeed filthy rich, and, yes, it's likely some do play golf -- but they know enough to do so in secret.

It's been more than a quarter century since a photo of a member of China's ruling class holding a golf club went public. Zhao Ziyang - the country's premier from 1980 to 1987 and general secretary, the Communist Party's highest-ranking official, from 1987 to 1989 - was the only top-level Party official to be relatively open about his golf habit. Zhao could regularly be found teeing it up at Beijing International Golf Club, near the famous Ming Tombs, where thirteen Chinese emperors were buried.

Zhao was not your typical Chinese leader, and perhaps that's why he was ousted and sentenced to house arrest not long after taking a sympathetic stance toward the Tiananmen Square student protesters in 1989. Zhao eschewed traditional Mao suits in favor of Western-style jackets and ties. He agreed to appear on the American television news show Meet the Press - downing two beers while on camera during his interview with Tom Brokaw.

Zhao's detractors branded these as examples of the "bourgeois liberalizations" he was allowing to pass through China's once airtight seal. Back in 1987, The New York Times had called Zhao the "dapper heir" to reform-minded Deng Xiaoping. In its article, it even noted a photo distributed by the Xinhua News Agency, China's official government media mouthpiece, that "shows [Zhao] on the golf course wearing a white baseball cap and clutching what knowledgeable observers believe is a three-iron."

When asked what would happen if newspapers were to somehow publish photos of China's current president enjoying a round of golf, one course manager predicted there would be one million new golfers in China the following day. "I think the possibility of that ever happening is zero," Song Liangliang, a spokesman for the China Golf Association, told me. "Photos of Zhao Ziyang caused such public turmoil back then."

And yet China is considered the savior to a global golf industry that's in serious trouble. Just last year in the United States alone, the number of active golfers shrank by 400,000 and 160 courses shut down. This has been the trend for the better part of the past decade.

Meanwhile, in China, the numbers have been trending upward since the country's first modern-day golf course opened 30 years ago -- golf has grown in lockstep with the booming Chinese economy, especially in recent years. In China, there are few things more aspirational than golf, and the luxurious lifestyle believed to surround it. It's a status symbol, a sign that you've "made it," like an Audi A6 or a Louis Vuitton handbag. Indeed, many of the new golf courses in China were built more as a way to help sell the mansions that line the fairways than to attract golfers to play on them.

It's difficult to pin down just how many actual golfers there are in China. Estimates range from several hundred thousand to several million, with the true figure likely lying somewhere in the middle. One thing everyone agrees on, however: The number is increasing, which is more than most other places in the world can say.

But it would be wrong to say golf fever is sweeping the country. China is a nation of peasant farmers, some 700 million of them. Truth is, most Chinese probably have no idea what golf is. They can't afford to. Golf will likely always be a niche sport in China, but with a population of 1.4 billion, a niche there can still mean millions of people.

That the global golf industry has its hopes pinned so tightly to China shows just how uncertain the market truly is. Statistically, zero percent of the country's population plays golf. Oh, and it's supposedly illegal to build golf courses there, as well.

China's latest ban on golf development came in 2004, when the government, citing the "blind construction" of courses, issued a moratorium intended to protect "the collective land of the peasants" and curb an out-of-control real estate market. With more than a billion mouths to feed and limited water and arable land, the concerns were obviously valid. But after the ban, the government in effect turned its back and let things grow even more out of control. Over the past decade, no country has built more golf courses than China - not even close.

Ten years ago, when the moratorium went into place, state media reported that China was home to 176 golf courses, and only 10 of them had received proper approvals from the government. Today, proper approvals don't even exist, and yet some estimate that the number of courses in China has eclipsed 1,000, although there's no way to know how many there really are. (In 2009, the Ministry of Land and Resources admitted they were using satellite imagery to try to get a handle on the number.)

Every foreign business knows that when they enter the Chinese market, they are going to have to play by China's rules, but when it comes to golf, no one knows what the rules actually are. Truth is, no golf course in China gets built without heavy government involvement, but it's always at the local level. Local officials in China often welcome and encourage golf development because they profit mightily from it. Thus, they are willing to gloss over the rules a bit. Rule No. 1 when planning a golf course in China: Don't call it a golf course.

Those in golf course design and construction have to play along and weather the occasional crackdown, because these days if they aren't working in China, they probably aren't working much at all.

Washburn has a new book on this topic, The Forbidden Game: Golf and the Chinese Dream, available here.

PHOTO GALLERY
Most Stunning Hotels In China
Download
Calling all HuffPost superfans!
Sign up for membership to become a founding member and help shape HuffPost's next chapter
Join HuffPost 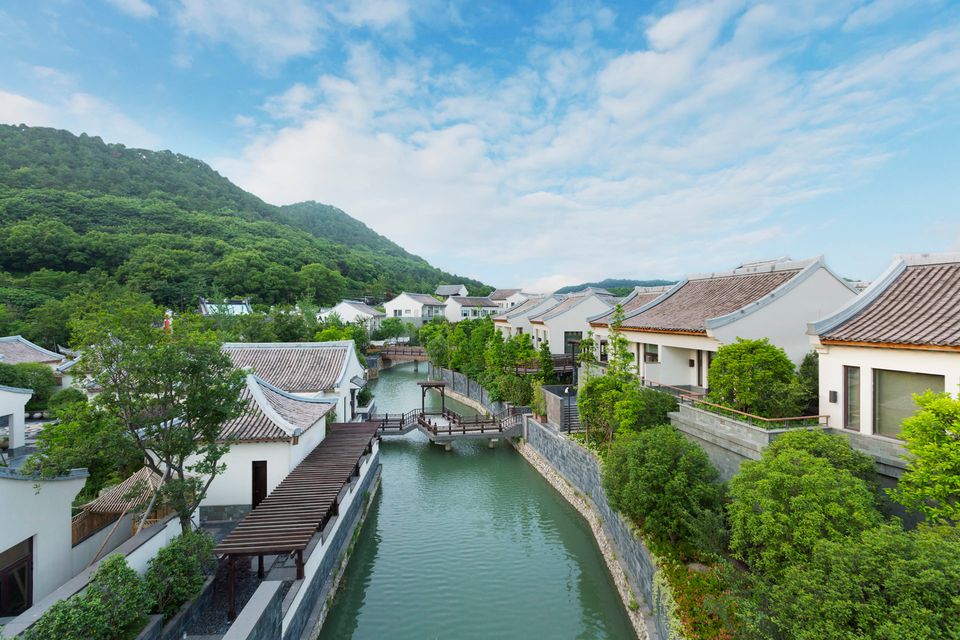 1 / 27
Park Hyatt Ningbo Resort and Spa
Situated on the banks of Dongqian Lake, which translates as ‘lake of money in the east’, this stunning resort near the city of Ningbo is just two hours by bullet train from Shanghai. Surrounded by mountains and overlooked by the tea plantations of Mount Fuquan, the scene is straight out of a classical Chinese painting. The resort has been created in the style of a traditional, Chinese water village made up of low-level villas with simply plastered exteriors and tiled, gabled roofs. Within the resort are original, historic buildings, such as a family mansion, which have been carefully restored. And there are also sublime modern additions, such as the stunning indoor swimming pool and outdoor infinity pool. Click <a href="http://ningbo.park.hyatt.com/en/hotel/home.html" target="_blank">here</a> for more information.
Park Hyatt