There's a new mega-mammal on the menu of America's first hunters.

On a ranch in northwestern Sonora, Mexico, archaeologists have discovered 13,400-year-old weapons mingled with bones from an extinct elephant relative called the gomphothere. The animal was smaller than mastodons and mammoths, but most had four sharp tusks for defense.

The new evidence puts the gomphothere in North America at the same time as a prehistoric group of paleo-Indians known as the Clovis culture, whose beautifully crafted projectile points helped bring down giant Ice Age mammals, including mammoths. This is the first time gomphothere fossils have been discovered with Clovis artifacts.

"The Clovis stereotypically went out and hunted mammoth, and now there's another elephant on the menu," said Vance Holliday, a co-author on the new study, published today (July 14) in the Proceedings of the National Academy of Sciences.

The archeological site, named "El Fin del Mundo" (the End of the Earth), marks two new extremes for both the Clovis and the gomphotheres. It is one of the oldest Clovis sites ever found, and the bones are the youngest gomphotheres ever discovered in North America. Until now, researchers thought gomphotheres vanished before humans reached North America. [In Photos: New Clovis site in Sonora] 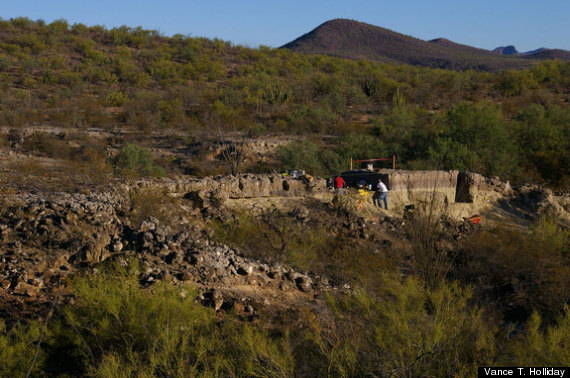 A 2007 photo of the El Fin del Mundo excavation site in Sonora, Mexico.

"The implications are pretty simple, although certainly not trivial — early human explorers of interior North America opportunistically targeted the largest Pleistocene animals as part of their cultural pattern, and this pattern probably started almost as soon as people had made their way south into the lower 48 states," said Gary Haynes, an archaeologist at the University of Nevada, Reno, who was not involved in the study. The Pleistocene epoch spans from about 2.6 million to 11,700 years ago.

The Sonora Clovis site is now scrubby desert, but it was once a spring-fed swamp that probably offered up a steady supply of fresh water. Nearby hills provided high-quality rock for the distinctive Clovis weapons, including spectacular quartz blades. "They are just mind-bogglingly beautiful," said Holliday, an archaeologist at the University of Arizona in Tucson. "There is definitely an aesthetic component to them."

The blade makers also shaped chalcedony, chert, quartzite and rhyolite into blades and scrapers. However, four of the blades from the ranch are basalt, which is locally rare but looks remarkably similar to rocks at a Clovis site called El Bajio, about 112 miles (180 kilometers) to the east, the researchers reported. 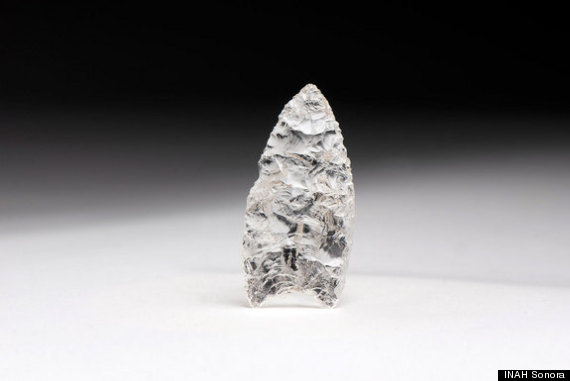 The gomphothere remains are from two juveniles, probably each younger than 12 years old when they died, the researchers said. The scientists also found two bone ornaments, and a piece of burned bone.

The team, led by Guadalupe Sanchez, of the Universidad Nacional Autónoma de México in Hermosillo, Mexico, excavated the cream-colored rock at the behest of the rancher who owns the land. He had noticed the bones and artifacts eroding from a small cliff, and invited the researchers to dig, Holliday said.

The scientists determined the site's age through radiocarbon dating on charcoal. The researchers dated charcoal in layers with bone and Clovis weapons to 11,550 radiocarbon years ago, which doesn't match up precisely with calendar dates. It's equivalent to 13,390 years ago. (The discrepancy is because of changes in global radiocarbon concentrations over time.)

That age suggests the Clovis people were hunting large mammals in the Southwest for a span of several hundred years, Holliday said. [See Images of the Baby Woolly Mammoths]

The youngest Clovis sites are about 125 miles (200 km) to the north, along the San Pedro River (Rio San Pedro) in Arizona, Holliday said. "These hunters were around for a long time, at least 500 years," he said. "It seems they were coming and going as they pleased, going from water source to water source and learning the land."

However, other scientists said they would like to see more carbon dates from the site before reaching broad conclusions about the origins of the Clovis. "The Achilles' heel is that there's just one radiocarbon age," said Michael Waters, director of the Center for the Study of the First Americans at Texas A&M University in College Station, who was not involved in the study. "I think this is a very interesting and exciting archaeological discovery, but the age needs to be confirmed."

Though the Clovis people were not the very first settlers of the New World, they were probably North America's first homegrown culture. Their trademark stone blades were the era's equivalent of the iPhone — an innovative, disruptive technology — and rapidly replaced earlier bone and antler tools. "There are really no other artifacts like it on any other continents," Holliday said. "This amazing technology just spread."

Clovis points were so popular and widespread that they still litter the ground in many places, especially in the Southwest and Southeast, including Mexico.

But scientists do not agree on where the technology first emerged, or why the Clovis people invented it. The Sonoran site's early age, combined with a similar age from a Clovis dig in Texas, suggests the culture may have risen in the South, Holliday said.

Earlier this year, a genetic analysis of a Clovis-era skeleton revealed that 80 percent of today's Native Americans, including indigenous people in Mexico and South America, share direct genetic links with this single known Clovis ancestor.