On Friday, the New York Film Festival screened the world premiere of "Gone Girl," David Fincher's adaptation of Gillian Flynn's best-seller. Starring Ben Affleck as Nick Dunne and Rosamund Pike as Amy, his wife who goes missing, all eyes are on how the film lives up to the celebrated novel. We've already confirmed that the ending isn't as altered as previously imagined, but there is so much more to unpack within the 149-minute fever dream. HuffPost Entertainment editors Matthew Jacobs and Erin Whitney attended the screening and were left with more than enough to consider about "cool girls," manipulative pregnancies and anniversary gifts gone awry. (Warning: Spoilers ahead for anyone who hasn't read the book.) 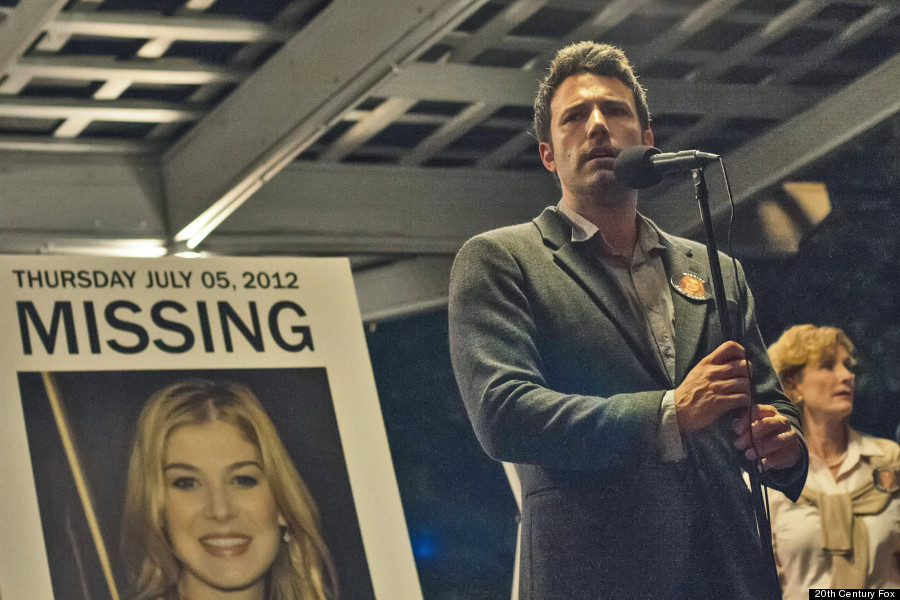 Jacobs: "Gone Girl" is arguably fall's most anticipated movie, and I can now say that it lived up to all of my expectations. It's been a year and a half since I read the novel, so I was more concerned with the film capturing the right tone than adhering to certain plot beats. With that in mind, Fincher has crafted an impeccable treatment of Flynn's story. It pulsates (literally, at times, thanks to Trent Reznor's threatening score) with the mystique of a macabre character study and the starkness of a rote crime procedural -- even though it doesn't feel rote at all.

With adaptations of novels as layered as this one, structure is often the first thing that suffers. Instead of establishing a film that can stand alone, they feel like the result of a checklist that ensured the right milestones from the book are satisfied. That's what I worried would happen to "Gone Girl," with its dual-narrator structure and heavy relationship with characters' pasts. But Flynn does smart things with the script -- the dialogue rarely feels expositional, even though these characters must do a lot of explaining throughout. And Ben Affleck and Rosamund Pike carry the film; Affleck with a detached rage and Pike with a calculated chill. I am thoroughly impressed, even if the final 10 minutes could be a bit more concentrated. You read the novel more recently, though, Erin. Did the movie hold up for you?

Whitney: I hate to admit it, but I can't deny the overwhelming disappointment I felt throughout the film. Full disclosure: I had literally just finished reading Flynn's novel days ago and completely loved every terrifying, brilliant page of it. I think that when you truly love a book that much, you're going to find yourself let down by any visual adaptation to some degree, and that's what happened for me. First though, let me state that Fincher's adaptation is a good movie with some of the best casting and performances I've seen all year. Whether you read the book or not, there is still something enjoyable and rewarding to take away from the film. But then again, I'm a perfectionist and a harsh critic, and when something I love in one form isn't translated as well in another, I feel cheated.

For me, Fincher's film played like a fun, entertaining recap of Flynn's novel, harvesting the best gems of the story that make it exciting and thrilling. Yet the film doesn't divulge the dark, twisted complexities beneath the surface, the nuances of Amy's psychopathy, Nick's sickened resentment and their ultimate addiction to destroying one another. Flynn's ability to continually flip the reader's sympathy and hatred for her characters doesn't translate as strongly to the screen, which is unfortunate since that is truly the defining achievement of her original story. In the film we aren't given strong reason to despise Amy wholly nor understand the depth of her passionate insanity -- instead of mutilating herself on the bathroom floor, she calmly drains her blood via a needle and tube while reading a book, and her murderous act in the film's latter stages is played as triumphant. Some of these moments are even comical in the film, which overall had more humor than I felt suited the story, trashy fun humor that read like an inside joke. I wanted "Gone Girl" to be darker and dirtier, in the vein of "Seven," but it felt lighter and too fun. Did this element of humor stand out to you, Matt, as much as it did to me?

Jacobs: I wasn't that disenchanted by the humor, but I do agree there's an "inside joke" sentiment running throughout the movie. Flynn seems to be writing for the people who read her book, which, in all fairness, will probably comprise a good bulk of the moviegoers who catch "Gone Girl" in theaters. She trims the edges of her story to fit a 2.5-hour format. Without the finesses of the character internalizations one can only glean from the more limitless pages of a novel, the movie does come with a whiff of melodrama. But sandwiching those hysterics between humor, for me, was a necessary respite, mostly because it doesn't distract from the more wrenching moments, like when Amy bludgeons herself with a hammer or when another character collapses upon her in a crimson deluge of blood. I think this movie captures a sense of cold calculation, which might mean, at times, truncating the characters' more inner workings in favor of emphasizing how astute their instabilities are.

What doesn't work for me, on a critical level -- and I very much understand this m.o. among critics and fans -- is when a movie like this is judged largely in comparison to the rest of the director's cannon. Fincher is working from a source material that commands a different atmosphere (and certainly a different interest level) than "Seven" or "Fight Club" or "The Social Network." Sure, "Gone Girl" may be a lot noisier than "Zodiac" and more restrained than "The Girl with the Dragon Tattoo," but I'm more interested in the way Fincher caters to the many people who want an accessible, big-budget thriller as well as those who can appreciate its stylistic nuances. I'm impressed, if not unsurprised, that Fincher has accomplished that.

Whitney: I have to agree with you that I'm definitely in the camp of not wanting to compare a director's latest work to his oeuvre. I strive to avoid succumbing to that temptation, but with someone like Fincher I find that even harder to do, and lately I've been craving more of the grittiness of his earlier work.

And I can definitely understand the decision to sacrifice the subtleties and latent darkness of the characters as a means to tell a more cohesive story. Sacrifices must be made somewhere, and I think Flynn made apt choices with her screenplay. Yet still, I don't think a story as rich and densely layered as "Gone Girl" is most suitable for a big-screen adaptation, mainly due to the time constraints. I can't help but wonder what it would look like as a miniseries. The era of the cinematic anthology TV series is in full swing right now, with FX's "Fargo" and HBO's "True Detective" proving that more can be accomplished with a 10-hour movie format broken up into episodes than with a roughly three-hour feature. While I'm not a fan of remakes, I do sort of hope that one day Fincher or another filmmaker will take "Gone Girl" down the anthology route so all of its delicious, psychotic and haunting fragments can be hashed out. Till then we have the film, and it is good and it does the job fine. It's like enjoying an incredible dish at a restaurant then going home and attempting to recreate it -- the overall flavor is there, but something's still missing. Or maybe I just need some distance from the book to better appreciate the film as a singular entity.

Jacobs: I love that thought, Erin. "Gone Girl" would have made a stellar miniseries. In that format, it really could have employed Amy's and Nick's bifurcated points of view in a more substantial way than the movie can. But since that's not what we're left with, I'd call "Gone Girl" a resounding success. 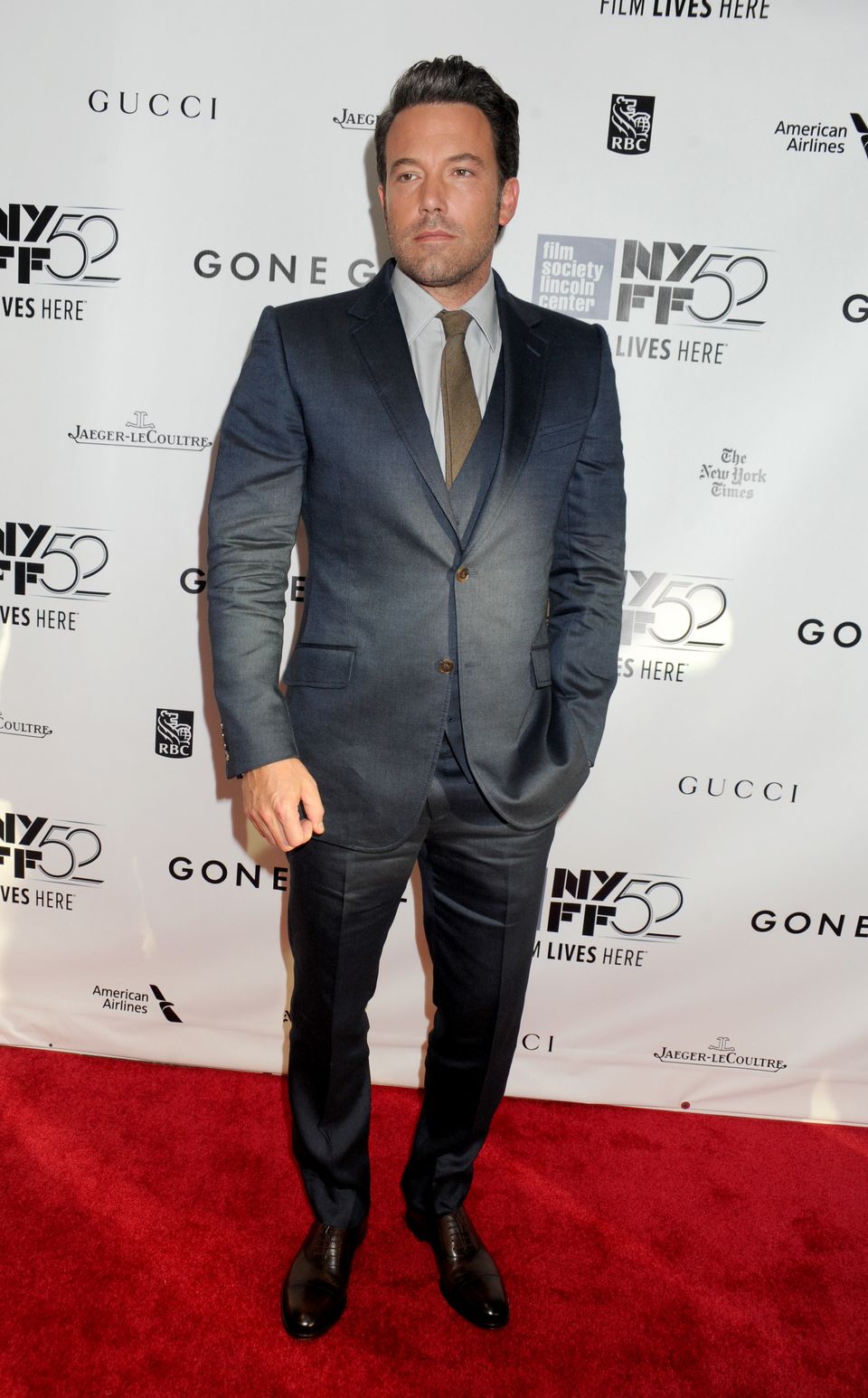