There's plenty of bad news in the world today, whether it's mass shootings, refugee crises or poverty. But many ordinary people are responding in extraordinary ways to the big problems around them. They choose to help complete strangers, even at great cost to themselves.

Their stories are part of Larissa MacFarquhar's book, Strangers Drowning: Grappling with Impossible Idealism, Drastic Choices, and the Overpowering Urge to Help.

You can listen to my interview with MacFarquhar here:

MacFarquhar describes a couple who adopts 20 children and a man who donates a kidney to someone he doesn't even know. Another couple lives frugally so they can give away most of their income to charity.

MacFarquhar, a staff writer at the New Yorker, calls her subjects "do-gooders" and she is aware of the word's pejorative implications. They are people who seek out suffering and plan their deeds "in cold blood." Heroes, by contrast, simply respond to problems or crises that are thrust upon them.

She says that we push back against do-gooders for many reasons. "We are selfish, lazy, conventional, we like our stuff, and we don't like to hear of someone who makes us feel bad about the way we live our lives," she says. "They make us feel guilty even implicitly. Or we may have a clichéd notion that someone who does very good deeds is likely to be self-righteous or judgmental, and we don't like that sort of person. We find them annoying." 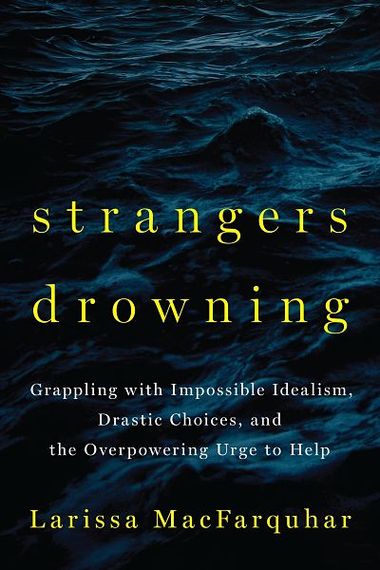 MacFarquhar says many people who gave their kidneys to strangers said they found the act appealing because it was simple. Unlike a large foreign aid project, it's just one organ going from one person to another. "But even this simple act turned out to be very complicated," she says. "Being the recipient of a gift that large, especially such an intimate gift, is difficult for the recipient. They sometimes get all twisted up about it. And often the giver was twisted up about it, too; feeling the discomfort of the recipient."

Referencing French anthropologist Marcel Masuss' research, MacFarquhar says gift giving was reciprocal in traditional societies. Giving without expecting something in return, on the other hand, was thought to be an aggressive act because it set up the giver as more powerful.

If we view unreciprocated gift giving as aggressive, that would pose problems for international aid. "I think it's a problem we're aware of, but we don't know what to do with," MacFarquhar says. "You are inevitably bringing aid that represents your sense of what is valuable in life and what people need and ought to want. And even if you are 100 percent right about that, you are bringing a sense that you are the benevolent, powerful one who has extra to give away. And the recipient is the dependent one who is reliant on charity. And that's such a difficult thing to deal with."

You may subscribe to the Tiny Spark podcast here.