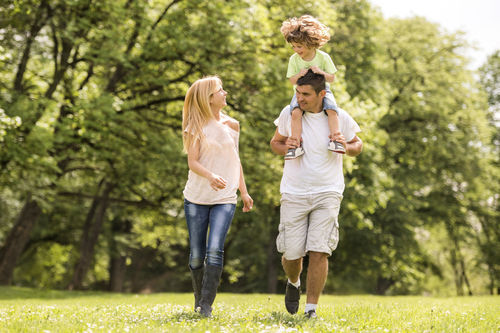 May 29th of this year will definitely be a day worth celebrating for me, as it's my anniversary. No, not my wedding anniversary. Quite the opposite, in fact. May 29th is my anniversary of walking into a courtroom on a sunny spring day and standing before a judge as she thoroughly went over my divorce papers and put an official end date on my 10-plus year marriage.

It took about 20 minutes from beginning to end. And then that was it. It was over. I walked into the courthouse a married woman and left a divorcee. Did I mention that I walked out of the court house with my brand new ex-husband, and we casually cracked some sort of joke (I can't remember what it was now), said "see ya later," and got in our separate cars and drove off?

It wasn't sad. It wasn't difficult. It didn't feel like I'd been punched in the gut or had the wind knocked out of me like countless other divorced people told me it would feel like. It felt ... right. And good. And I breathed a huge sigh of relief and drove myself to one of my favorite restaurants, grabbed a seat in the bar, and ordered lunch and a fat glass of wine. (Ok, I had two.)

I had done it. I had the balls to take a leap of faith and make a huge change. I chose happiness and to start my life over on my terms. Life was good, and it was only going to get better from that point forward.

More from The Stir: 36 Things I Wish Someone Told Me About Divorce

And if you're sitting there thinking that this is the point in my story where I tell you how difficult things have been for me over the past year, or where I tell you that divorce challenges you in ways you never thought were possible and that it takes its toll on all parties involved and creates all sorts of new problems -- I'm sorry to disappoint you.

Sure, we had our fair share of roadblocks and hurdles during the process of our marriage unfolding, but somehow he and I have managed to come out of this whole thing with a pretty darn "good" divorce. Yes, there is such a thing. It isn't the norm -- but let me be the first to tell you that having a good divorce is a hell of a lot better than staying in a not-so-good marriage.

More from The Stir: 11 Texts That Reveal the Messy Truth About Life After Divorce (PHOTOS)

Yes, there are things about my ex-husband and our marriage that I will always harbor resentment for. And there are still days where he does something that makes me question how in the hell we ever wound up together in the first place. But for the sake of my happiness and sanity, and the happiness of our son, I'm 100 percent committed to having a positive relationship with him.

Actually, I tell people all the time that he and I are still friends -- because even though our marriage is over, we haven't allowed the dissolution of our relationship to completely destroy the mutual respect we have for each other as parents. Respecting each other as parents means doing everything in our power to make sure our son knows that he has both a mom and a dad who love him very much, and who work together to care for him as opposed to against each other for the sake of some sort of petty personal gain.

The three of us still go out to dinner together once in a while, though now we split the check down the middle. We celebrated Christmas together "as a family" -- with my ex spending the night at my home on Christmas Eve so we could all be together Christmas morning. We attended Christmas Eve mass together to watch our son in the nativity play. We put presents under the tree and put out cookies for Santa after our son went to bed that night, and to be honest, Christmas morning really wasn't any different than it had been in years prior, except for one big thing -- there wasn't any bitterness or toxicity between us any more.

When one of us has to travel for work, the other steps up to the plate to get our son to and from school without any sort of hesitation. Recently when the bunk beds were unsteady in my son's room, I asked my ex if he would come take a look at them, and he showed up with his toolkit and fixed them. And when he has a meeting run late at work and can't be here to pick up our son "on time," I tell him not to worry about it and just get here when he can.

While at times I'm sure it's tempting for both of us to get annoyed or fly off the handle because we shouldn't have to do this shit and help each other out since we're not married any more, we don't. Because we have a "good" divorce, and the only way to keep our divorce good is by not letting our emotions get in the way of our well being.

More from The Stir: Quiz: How Much Do You Know About Divorce?

When I first asked my ex for a divorce, I had absolutely no idea what the outcome was going to be, in the sense of how life would go on after we put an end to everything we'd been accustomed to up until that point. There were days when I had no idea where I was going to go, or where I was going to live, or how the whole ordeal would affect my son. Like any other soon-to-be-divorced mom, I worried that by making this whopper of a decision, I was guaranteeing that the poor kid would be screwed up for life and would wind up on an episode of Hoarders or America's Most Wanted, or whatever. But instead of letting my fears stop me from moving on, I jumped off the cliff and never looked back.

And I guess that's why I felt compelled to write this today -- for all of the women who are sitting in the same spot I was a couple of years ago, contemplating divorce and wondering what in the hell will happen to their life and the lives of their children if they take the leap.

No one knows exactly but the future holds, but I can tell you that good divorces do exist -- and there's a decent chance that you can have one too as long as both parties involved are committed to it.

And while it's pretty safe to say that nobody who has ever been married goes into it thinking they'll wind up divorced someday, it's funny how life throws you curveballs and happiness winds up coming full circle. Sometimes relationships don't work out, and that's ok. On my wedding day, I didn't foresee divorce as a part of my journey, but given how "good" the experience of ending one marriage has been for me, I can honestly say I've never been more optimistic about the surprises life has in store for me in the future.

Sometimes if you want to experience the good things, it means having the strength to let go of the bad. That's my story and I'm stickin' to it.

Mary Hawkins is a Senior Audience Development Editor at The Stir

Voting Made Easy
Register to vote and apply for an absentee ballot today
Register now
More:
divorceLife After DivorceLoveMarriage
Newsletter Sign Up
A weekly guide to improving all of the relationships in your life
Subscribe to HuffPost’s relationships email
Successfully Subscribed!
Realness delivered to your inbox