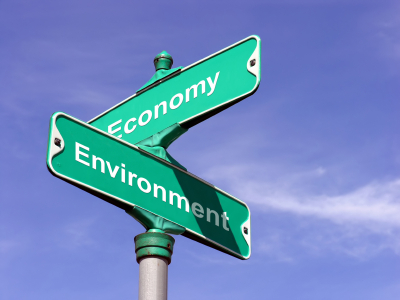 Today is World Environment Day. Celebrated in more than 100 countries, the United Nations describes it as the "principal vehicle" for promoting environmental action and awareness, and "the people's day for doing something positive for the environment." Ultimately, this is a call to action for individuals, governments and businesses alike to strengthen their efforts in defense of our global environment.

For individuals, the incentives for protecting the environment are seemingly obvious. These include our ability to enjoy the natural surroundings in which we live, the availability of food and resources upon which we rely, and the ultimate goal of leaving a better world for our children and grandchildren. While we may not always make the most sustainable choices when choosing cars or cooling our homes, the importance of the environment is omnipresent in each of our daily lives.

For national governments, the incentives to protect the environment are also clear, but must be balanced with other interests. The need to balance environmental policies with short-term economic priorities is a source of contention in many countries in developing, as well as developed, markets worldwide. And while there will always be differences of opinion on where that right balance lies, the political significance of the environment to the vast majority of governments and their constituents is broadly accepted.

For intergovernmental institutions, such as the United Nations and the G20, the importance of the environment has been high on their agenda for decades. And while the international community has sometimes been slow to take shared and decisive action, there is a growing understanding of the negative social, political and security impacts if the world's environmental challenges are left unchecked.

However, when it comes to business, the incentives for sound environmental practices can too often be obscured by other factors. For example, the pressures of competition, the short-term perspectives of many boards and the emphasis placed on quarterly results can push environmental concerns way down a company's list of priorities. In fact, PwC's Global CEO Survey for 2013 found that concern over climate change had actually declined significantly among business leaders due to being "seemingly overshadowed by more pressing short-term economic issues".

I believe that is a shortsighted and imprudent approach. In today's increasingly globalised economy, no business can afford to ignore the importance of sound environmental practices, in-turn risking their corporate reputation, relations with stakeholders and long-term commercial interests. The bottom-line is that businesses willing to make sustainable decisions today will be more likely to reap sustainable rewards in the future, through the technical benefits of innovation and the commercial benefits of increased trust.

While some business owners may regard commercial and environmental factors as mutually exclusive, or as a zero-sum game, consumers no longer see it that way. Perhaps they never did. According to the Edelman Trust Barometer for 2014, an annual study measuring trust in a range of institutions, 84 percent of respondents expressed a belief that businesses can pursue their self-interest while at the same doing good for society and the environment.

In fact the Edelman study found that since the economic crisis of 2008, the importance of "integrity-based attributes" for generating trust has actually been on the rise, compared with more traditional business metrics. Companies that fail to heed this warning, and purely pursue commercial interests at the expense of sustainability, will eventually pay for it in reduced trust in the marketplace, a weakened reputation, and ultimately poorer overall results. Conversely, firms that can demonstrate integrity to their stakeholders through a genuine commitment to sustainability in all its forms will increasingly find themselves at a commercial competitive advantage.

It is easy to think that one person, or one business, can never make a meaningful difference, and that short-term priorities usually prevail. However that attitude is in itself as unsustainable as the actions that it will precipitate. According to UNEP, "when multiplied by a global chorus, our individual voices and actions become exponential in their impact." On this World Environment Day, and in the year ahead, it is in the long-term commercial interests of every business to lend their voice to that growing tune.