U.S.
Canada U.K. Australia Brazil España France Ελλάδα (Greece) India Italia 日本 (Japan) 한국 (Korea) Quebec
CLOSE
Coronavirus News U.S. News World News Business Environment Health Social Justice
Politics Congress Donald Trump 2020 Election Tracker Extremism
Entertainment Culture & Arts Media Celebrity TV & Film
Life Style & Beauty Food & Drink Parenting Travel Finds Wellness Relationships Money Home & Living Work/Life
Communities Queer Voices Women Black Voices Latino Voices Asian Voices
Special Projects Pride 2020 Work In Progress Impact: This New World Highline Listen to America Podcasts
HuffPost Personal Video Horoscopes
From Our Partners Women's Work What's Working: Purpose + Profit
Newsletters Coupons
International Australia Brazil Canada España France Ελλάδα (Greece) India Italia 日本 (Japan) 한국 (Korea) Quebec U.K. U.S.
Follow us
Terms | Privacy Policy
Part of HuffPost Religion. ©2020 Verizon Media. All rights reserved. Huffington Post.
BREAKING NEWS
Tap here to turn on desktop notifications to get the news sent straight to you.
Good Friday is the Christian commemoration of Jesus’ Passion story, specifically his betrayal, trial and crucifixion that are described in the Christian gospels. In the sequence of Holy Week, it follows the rituals marking the Last Supper on Maundy Thursday and precedes the celebration of Jesus’ resurrection on Easter Sunday.
In 2016
, it takes place on March 25.
Since Jewish tradition dictates that Friday begins at sundown on Thursday, the events of
Good Friday
traditionally begin with the betrayal of Jesus by his apostle Judas in the garden of Gethsemane. He is subsequently brought before the Sanhedrin council, the Roman governor Pontius Pilate and King Herod of Galilee with the ultimate outcome being his condemnation to death by crucifixion.
The
trial of Jesus
and his crucifixion are described in varying detail by all four canonical Gospels, the Jewish historian
Josephus
and the Roman writer
Tacitus
.
Good Friday church services generally revolve around the reading of the Gospel accounts of the Passion story. The
Catholic liturgy
for Good Friday also includes the distribution of the Eucharist that was consecrated during the Mass on Maundy Thursday and special veneration of the cross by inviting individuals to approach the altar and kiss the wood of the crucifix.
Many Christians also mark Good Friday by participating in or watching processions meant to replicate the journey that Jesus took through the streets of Jerusalem while carrying his cross to the site of his crucifixion at Calvary. Two of the largest and most famous of these occasions are Rome’s
Way of the Cross
that leads to the Colosseum and is presided over by the Pope and the
Via Dolorosa
in Jerusalem -- a procession along the traditionally marked route of Jesus that is attended by thousands of pilgrims each year.
Good Friday is also a day of strict fasting for Catholics and some other Christians. As with all the Fridays of Lent, Catholics are instructed to abstain from eating meat. As with
Ash Wednesday
, the
fasting rules for Good Friday
dictate that adherents should eat only one full meal with two smaller meals being permitted as long as no other food is consumed in the interim. The use of other meat-based products such as lard, chicken broth or dairy is not traditionally forbidden, although many individuals elect to make their Good Friday meals entirely vegetarian or vegan.
In many countries with strong Christian traditions such as those in Latin America, Good Friday is observed as a national holiday. Good Friday is not a federal holiday in the United States, but several states observe it as an official state holiday by closing government offices, courts and banks.
Download
Calling all HuffPost superfans!
Sign up for membership to become a founding member and help shape HuffPost's next chapter
Join HuffPost 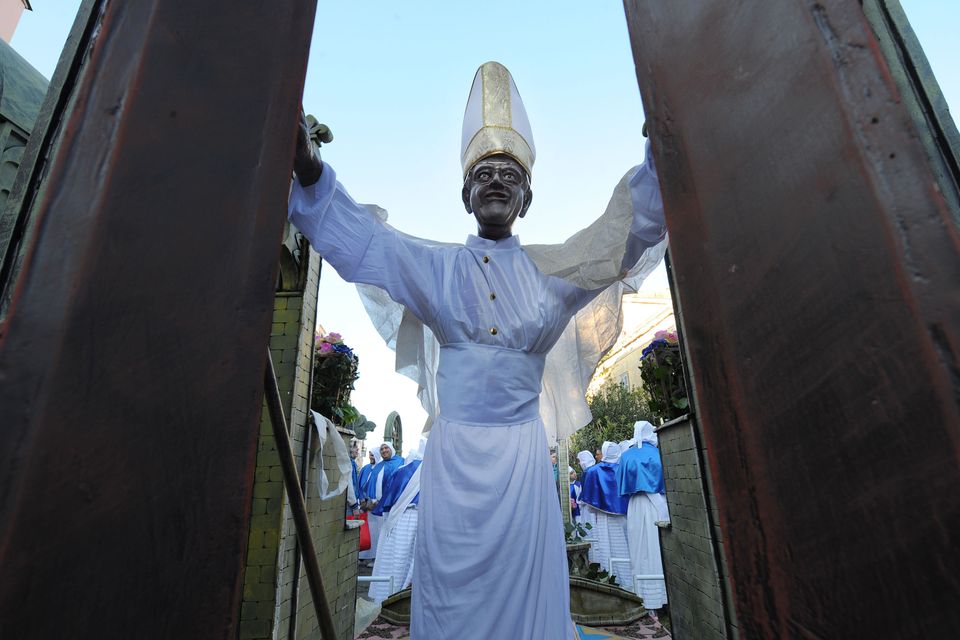 1 / 14
Penitents carry a wooden structure called 'Pope Francis Open Jubilee door' during a procession for Good Friday on March 25, 2016 in the small island of Procida in the Gulf of Naples. Christian believers around the world mark the Holy Week of Easter in celebration of the crucifixion and resurrection of Jesus Christ. / AFP / MARIO LAPORTA (Photo credit should read MARIO LAPORTA/AFP/Getty Images)
MARIO LAPORTA via Getty Images