In past years, I have sometimes looked to the remembrance of "Good" Friday with a spirit of dread. The darkness of the day. The magnitude of what we commemorate. Christ -- the perfect unblemished human and Son of God, Deity incarnate -- willingly gave Himself, even unto death on a cross for the forgiveness of sins for those who believe.

For God so loved the world that He gave His one and only son that whoever believes in Him would not perish but have everlasting life. (John 3:16)

"Good" Friday remembers the day of Christ's crucifixion on the cross. Christians enter into the reality of our brokenness, depravity, and need for God. In the church calendar, it is a day of mourning, sorrow, and grief. A time when we allow ourselves to wait in anticipation for what will come three days hence. In many churches, the clergy wear black and no candles are lit.

For a time, there is only darkness.

The holiday is also known as "Black" Friday which emphasizes the betrayal of Jesus by Judas Iscariot. As Christ was praying in the Garden of Gethsemane, Judas appeared and greeted him with a holy kiss. Then the guards took him and arrested him. After his arrest, Pilate handed Jesus over to be crucified. Jesus was detained, taunted, and whipped by the guards. They cast lots for his garments. He was forced to wear a crown of thorns upon his head. "After they had mocked him, they took off the robe and put his own clothes on him. Then they led him away to crucify him." (Matthew 27:31)

One of the most powerful experiences I have ever had in relation to Good Friday was in 1990 at the Oberammergau Passion Play in Germany. The play has been performed for centuries in the small German village as a commemoration of God's favor upon the town. During the time of the bubonic plague, when almost half of the European population died of disease, the small town of Oberammergau prayed that Christ would spare their village. Not one member of the village died. In honor of God's faithfulness, the town committed to performing a play every ten years to tell the story of the Passion of Christ. 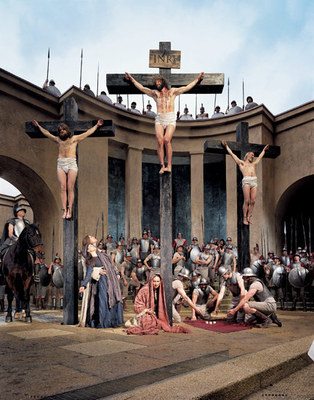 The Crucifixion of Christ - Oberammergau

During the performance I attended, the scene of Christ's betrayal and crucifixion was so vividly real. The drama took place on a stage set against the outdoors. Thus, the weather provided the backdrop as the story unfolded. When it came time for Christ to be crucified, the sky darkened and a blackness descended.

I will never forget hearing the words ring out "It is finished." (The play is performed in German but translation is provided.) Just as the drama climaxed to this moment -- thunder burst out and a stream of lightening lit up the sky. It was as if Creation itself was giving credence to the story that was being acted out on the very stage in front of us.

"And when Jesus had cried out again in a loud voice, he gave up his spirit. At that moment the curtain of the temple was torn in two from top to bottom. The earth shook, the rocks split and the tombs broke open." (Matthew 27:50-51)

The power and significance of Christ's death on the cross provides the opportunity for us to take pause. Although the story may be familiar, it is no less powerful year by year as we commemorate the most precious gift of Christ's sacrifice.

May the reality of the Lord's gift enter into our hearts this day. In Christ.