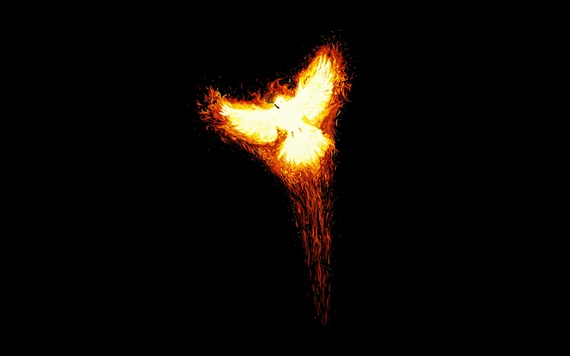 Bent, then broken, then divorced. Then, tomorrow. (Image/wallpaperscraft.com)

Panic, really. Anxiety overpowered me. It was hard to breathe. I felt sad in ways I didn't know people could feel. It was probably depression. I felt angry in ways I've never fully admitted. A secret mask-wearing rage monster I kept in its cage in an effort to be polite.

The English language doesn't have the right word to describe the pain. I've felt intense physical pain before. We've invented things to help that effectively. This was something else.

I didn't want to murder or even hurt anyone. That's not who I am. I kind of wanted to die because this was a feeling that maybe some exceedingly strong person might be able to battle forever, but I couldn't have. Every single good thing in life is impossible to enjoy when you feel that poisoned and damaged. I didn't want to kill myself. That's not who I am either. But I wanted it to stop. Needed it, even.

It's mostly a blur even though it was just three years ago.

The day I remember best is one where I was getting my kindergartner ready for school. He wasn't cooperating and I was pissed because I didn't know how to do any of this shit alone. His daycare lady, a family friend, came to pick him up to drive him to school as was the routine then. My son knew we wouldn't see each other for a few days, and he didn't like that we'd been arguing.

It was time to say goodbye, but he didn't want to. He hugged my leg, crying. The daycare lady peeled him off me. "Daddy needs to go to work, sweetheart. C'mon. We need to get you to school," she said.

He cried for me with outstretched arms like you'd see in a movie: "Daddy! Daddy!" as she carried him away.

I think that was the low.

Chest heaving. Fists clenched. Tears falling. I was 34 years old, but felt like I was 5. Between the sobs, I called my wife awful things I didn't really mean and weren't at all true.

According to the Holmes and Rahe Stress Scale--the only measuring stick we have outside of our own brains and guts--divorce is harder on us than some very bad things like the deaths of our parents or children, going to prison, or getting cancer.

The only life event deemed more stressful than divorce is the death of a spouse. And I don't mean to trivialize the emotional devastation of being widowed, but even THAT has one minor upside over divorce for some dads: you don't have to spend months or years sad, angry, and freaking out while another man has sex with your wife.

Divorce is hard. I cried once or a hundred times during the process. Your marriage either matters or it doesn't. You either meant your wedding vows or you didn't.

I never questioned my sanity or emotional stability until my marriage fell apart.

There wasn't just one moment that broke it. I don't think there ever is. People sometimes think marriages end because of some big, dramatic moment that becomes the point of no return. And sometimes that does happen. But they happen BECAUSE of the million little things no one realizes is fracturing and destabilizing their relationships while they're happening.

It's scary because so few see it coming.

And it was horrible. The worst thing that ever happened to me.

But it gave me something, too, because when the Earth orbits the sun enough times, life gives you things.

Perspective. Wisdom. Opportunity. The experience of healing from the inside out. Of growing. Of forgiving and feeling forgiven. Of loving when it's inconvenient.

And now I get to be somebody better than I was before.

In all the ways that matter.

The Moment I Knew
More:
when men divorceHealthdivorceRelationshipsmoving on after divorce
Newsletter Sign Up
A weekly guide to improving all of the relationships in your life
Subscribe to HuffPost’s relationships email
Successfully Subscribed!
Realness delivered to your inbox