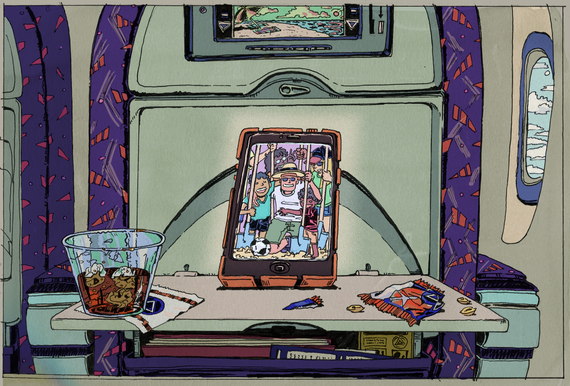 In 1968, while speaking to a conference on international student projects, Ivan Illich told those in attendance "the existence of organizations like yours is offensive." In his impassioned speech To Hell With Good Intentions, the philosopher and former Catholic Priest offered a powerful message to Westerners volunteering abroad. Here's a little of what he had to say:

By definition, you cannot help being ultimately vacationing salesmen for the middle-class 'American Way of Life'
...
[Volunteers] define their role as service. Actually, they frequently wind up alleviating the damage done by money and weapons [from their own countries], or "seducing" the "underdeveloped" to the benefits of the world of affluence and achievement.
...
It is incredibly unfair for you to impose yourselves on a village where you are so linguistically deaf and dumb that you don't even understand what you are doing, or what people think of you.

Nearly 50 years later, the phenomenon of volunteering in economically poor regions--sometimes known as voluntourism--is more popular than ever. But are the same issues Illich addressed relevant today?

In 2010 Linda Richter, executive director of the Human Sciences Research Council, led a study on the "thriving industry of AIDS orphan tourism" in Sub-Saharan Africa. What she found is disturbing. The majority of children in these orphanages "are there because of poverty rather than because their parents have died." Richter discovered that:

[D]estitute parents may place their children in orphanages in the hope that their child will receive meals, clothing and schooling.

Essentially, the influx of voluntourists willing to pay for an emotionally powerful experience has created a market for orphans. Children are sent to orphanages by their living parents to fill this demand and as a result they're raised through an ever-changing stream of foreign volunteers "likely to be especially damaging to young children." The volunteers "are encouraged to 'make intimate connections' with previously neglected, abused, and abandoned young children," but after their brief visit, the children "have experienced another abandonment to the detriment of their short- and long-term emotional and social development."

It is upsetting to realize the kind of damage that has been done by groups of well-intentioned Westerners on whirlwind trips to "make a difference" abroad. But how can organizations avoid being involved in potentially detrimental projects? Fellow Huffington Post blogger Pippa Biddle believes "the power dynamics of voluntourism, [are] all about privilege." Voluntourists have options: the option to travel, the option to ignore global poverty, the option to walk away from the partnership with a local community. The communities, on the other hand, are not in a position to turn down assistance. Though it is "difficult to own up to," Biddle reminds us that "our kind intentions and good will...are not enough" on their own to compensate for this imbalance.

Pakistani newspaper columnist Rafia Zakaria suggests one pitfall of voluntourism is a "lack of knowledge of other cultures [that] makes them [seem] easier to help.":

Other people's problems seem simpler, uncomplicated and easier to solve ...unlike the problems of other societies, the failing inner city schools in Chicago or the haplessness of those living on the fringes in Detroit is connected to larger political narratives.

Given the complex history of every community, the power dynamic between volunteers and locals, and startling examples of good intentions gone wrong, it's understandable that Illich spoke against voluntourism altogether. However, Zakaria and many others still believe there is great value to the experience and that "despite its flaws, the educational aspect of voluntourism's cross-cultural exchange must be saved, made better instead of being rejected completely."

From finding a partner organization to arriving on site, to posting pictures online and talking to friends when you get home, there's a lot to consider. In a sea of advice from experts, a few basic themes seem to repeat:

Educate yourself. Before you leave home, learn whatever you can about the region and the culture of the people you're planning to work with. Be aware of the historical events that led to their complicated situation and to your own. Ossob Mohamud of The Guardian Africa Network believes "time and energy [should be] spent building real solidarity between disparate societies .... Instead of focusing on surface symptoms of poverty, volunteers and the organisations that recruit them should focus on the causes that often stem from an unjust global economic order.... the idea is to get volunteers to understand their own (direct or indirect) role in global poverty ... to get volunteers truly invested in ending poverty, and not simply to feel better about themselves."

Be practical. Find out what the community needs, and ask yourself what you can realistically contribute. Pick a project or partner that has proven, lasting results. Attack root causes and work with a communities' strengths. Richter suggests that rather than volunteering in an orphanage, "every available resource should be utilised to support families and extended kin [when possible] to ... care for their children."

Listen. Remember that you're coming from a position of immense privilege. Simply traveling by plane from an economically wealthy country places you in a relatively small global class. Be aware of the power dynamic this creates and listen more than you speak. Biddle recommends volunteers "be helped, with input from the community, in finding what skills [they] can offer, whether that be fund-raising for new textbooks or helping with the harvest."

There is no complete list of advice, no one guaranteed path to a successful project. But at the end of the day, most will agree that the invitation to work with another culture is an incredible gift. For those who are willing to go abroad humbly, even Ivan Illich has some advice:

[Traveling on these projects] could lead you to new awareness: the awareness that even North Americans can receive the gift of hospitality without the slightest ability to pay for it; the awareness that for some gifts one cannot even say "thank you."