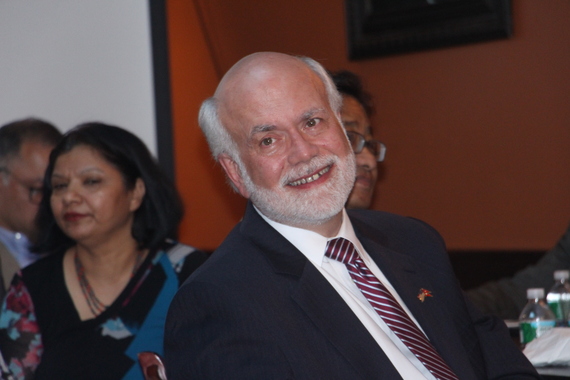 What is your plan for your life after retirement? You may want to have a relaxed retirement. But a retired U.S. diplomat is not satisfied with a relaxed retirement. Scott H. DeLisi, who served as the United States Ambassador to Nepal from March 2010 to June 2012, is rocking his social work through the Soarway Foundation.

According to the U.S. Embassy in Kathmandu, DeLisi was previously United States Ambassador to Eritrea and Deputy Chief of Mission of the American Embassy in Botswana. He also served in India, Madagascar, Pakistan, and Sri Lanka as well as various postings in Washington DC. DeLisi has been the recipient of a Presidential Rank Award, the James Clement Dunn Award for Excellence, the DIA Director's Award, four Superior Honor Awards, and two Meritorious Honor Awards. His foreign languages include French and Urdu. A native of Minnesota, Ambassador DeLisi is a graduate of the University of Minnesota, earned the degree of Juris Doctor from the University of Minnesota Law School, and is an alumnus of the Hubert H. Humphrey School of Public Affairs. He and his wife Leija have three children and two grandchildren.

What is your plan for your life after retirement? You may want to have a relaxed retirement. But a retired U.S. diplomat is not satisfied with a relaxed retirement. Scott H. DeLisi, who served as the United States Ambassador to Nepal from March 2010 to June 2012, is rocking his social work through Soarway Foundation.

A former career diplomat with 34 years of experience, DeLisi is the Executive Director of the Soarway Foundation, a 501(c)(3) charity committed to disaster risk reduction and recovery in Nepal. The Soarway Foundation was created in April of 2015 with the intent to focus on disaster risk reduction and preparedness in Nepal. According to the foundation, Soarway believes that working in partnership with the people of Nepal they can help create a more resilient nation, preserve a culture that is a treasure for the world, and help make Nepal's inspiring natural beauty once again accessible to all. That is the Soarway mission and they are confident that, in pursuing it, they can help shape a future that Nepalis will face with confidence rather than fear.

'Soarway is engaged broadly in Nepal, recognizing that disaster preparedness is more than just building strong schools or strong homes; it is equally about building strong communities and a society that is safer, more resilient and better able to weather the seismic storms of the future,' DeLisi Says. 'We're supporting kids orphaned in the earthquakes, helping to build homes and schools, bringing needed medical support and fighting to protect young women and girls -- some as young as six years old -- from the predators who would traffic them into sexual slavery.'

Soarway is engaged broadly in Nepal, recognizing that disaster preparedness is more than just building strong schools or strong homes; it is equally about building strong communities and a society that is safer, more resilient and better able to weather the seismic storms of the future.

Soarway Foundation is working on the upcoming Wounded Heroes Trek of Hope that has the potential to broaden and deepen their partnership and give a far higher profile to Nepal on several levels. According to Delisi, their goal is to send ten Americans with physical challenges to Nepal on a once in a lifetime trekking experience. Many of them are veterans, including Stefan, a double amputee who lost his legs in Afghanistan, and Sara who lost a leg in an accident while searching the rubble at the Pentagon for fallen comrades after 9/11.

Then there's Adrianne Hasslett-Davis, a ballroom dancer who lost her left leg in the Boston Marathon bombing and who demonstrates daily that courage is not only found on the battlefield -- it is part of our daily lives and all the more so when tackling that life with physical challenges that test you every day. All trekkers are rebuilding their lives with determination and strength and courage. 'That inspire us and we are honored to support them and hope for your engagement as well,' DeLisi Says.

The Wounded Heroes Trek is tied to the UN Year of Tourism for all and this first group, which will trek in September, will be in Nepal on World Tourism day where they will highlight the options for people with disabilities and inspire the 500,000 Nepalis with physical challenges who we seek to empower and engage. They have the support of Nepal's Ambassador to the US, Dr. Arjun Karki, and are now talking to the US State Department and US Agency for International Development about a broader inclusive/accessible tourism engagement.

'Although I am proud of this program and the other Soarway activities, I know that it is not enough to just care--we have to spread the word and share our story about the issues that matter to us. Fortunately, we now have a wonderful opportunity to spread the word about Nepal through the Empower Nepal Tour featuring concerts by the incredibly talented Nepali music group, Sur Sudha,' DeLisi Says.

The Empower Nepal Tour is tailor-made to raise awareness about Nepal's wonderful culture while also highlighting their ongoing efforts to help the people of Nepal shape a future that they can face with hope rather than fear. Sur Sudha will perform in Dallas, Chicago, New York, Pittsburgh, Springfield, VA, Washington, D.C., Baltimore, and Boulder.

Here is a link providing more background on both the Sur Sudha event and the Wounded Hero Trek of Hope.

Good job DeLisi, proud of you!