Growing up my family had a habit that was viewed as crazy by some, off the wall by others, and obscene by the truly informed.

My father had a very high work ethic. As CEO at the local Coca-Cola Bottling Company, he would sit in meetings with supervisors, listen to their reports....but tended to rely more on the information that he got directly from the route men, the ones that were in the stores, the ones that heard comments by store managers and floor managers....
comments often not passed on in a more formal meeting with somewhere higher in rank.

Thus he began the habit of being at the plant no later than 6 AM each morning so that he could walk among the trucks as they were being loaded, asking questions, listening for important information.

But Daddy had another peculiar habit...he liked to have breakfast with his entire family and Mother...a total of about 8, depending on the year and who had been born or come to live with us.

4:45 AM found Daddy going up and down the hallways...SINGING! Yes, Singing!

"Good morning children, time to open up those eyes and let the sunshine come in and fertilize your brains!"

As Daddy was not a singer, the tune would change each morning, but the words were always the same. He knew the first chorus would not be enough to get us out of the deep slumber and start to stagger into the kitchen where Mother was cooking breakfast, so there would be a second round of that melodious wonder.

If that didn't work, Mother would go to each room, turn on the overhead lights that each had a 300 watt bulb in both outlets and scream at the top of her lungs, "GET UP." Wanting to avoid that unpleasant ear-splitting scene, we usually responded to the second chorus. It was just so much more pleasant.

There was a 95% chance it was the same breakfast each morning....scrambled eggs that had been in the pan so long that they were very close to dust...you kept them out of a direct breeze from a fan as they would scatter on the table. Bacon was a crapshoot. It could have Mother run one of her lighters up and down the outside of each piece and thrown them on the platter, or it might have been in a pan, cooked down to pieces so hard that they would give beef jerky a three legged race to the undertaker as to which was harder to chew. Toast was usually decent...there is very little you can really do to toast. 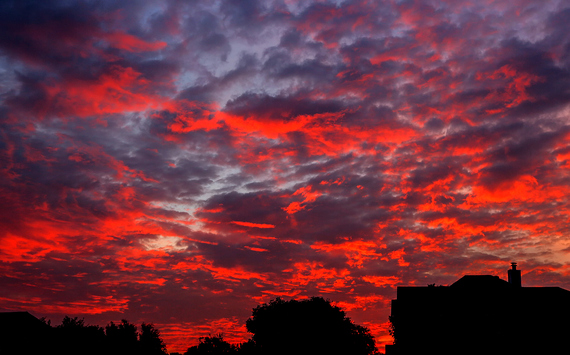 Surprisingly I look back on those times as good ones...but most people thought we were nuts. What Daddy didn't know was that as soon as his car left the driveway we all went rushing back to bed and get in an hour or two more of sleep, then rise and go about our day.

The thing that continues to amaze me is that Daddy would even WANT to have breakfast with so many young, unpleasant, snarling children in the first place. Since there were so many of us, I suppose he looked at it as the one time he could have all of his chickadees in one place at the same time....and since we were on the edge of incoherence, he had a captive audience and could talk about all sorts of things.

The other thing is that he loved us. And on that count there was never any doubt.

"Good morning children, time to open up those eyes and let the sunshine come in and fertilize your brains!"