I'm writing this from the Harvard press conference announcing what I consider to be one of the most important scientific discoveries of all time. Within the hour, it will be all over the web, and before long, it will lead to at least one Nobel Prize. But what precisely is it that the BICEP2 experiment has discovered during years of sky-gazing from the South Pole?

About 13.8 billion years ago, merely 400,000 years after our Big Bang, everything in our observable universe was a hot plasma not too different from the surface of the Sun. Photos of this plasma, baby pictures of our universe around its 400,000th birthday, have already revolutionized modern cosmology and triggered two Nobel prizes. Now a team of astronomers has spent three years zooming in on about 1% of the sky, taking even sharper photo of this plasma, including its polarization (a property of light that bees can see and use to navigate), discovering that it's distorted in a tantalizing way. 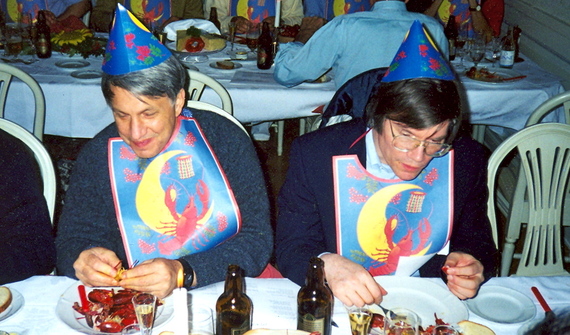 Andrei Linde (left) and Alan Guth (right) at a Swedish crayfish party, blissfully unaware that I'm photographing them and that they'll need to dress differently to collect the prestigious Gruber and Milner prizes, which recognized them as the two main architects of inflation. 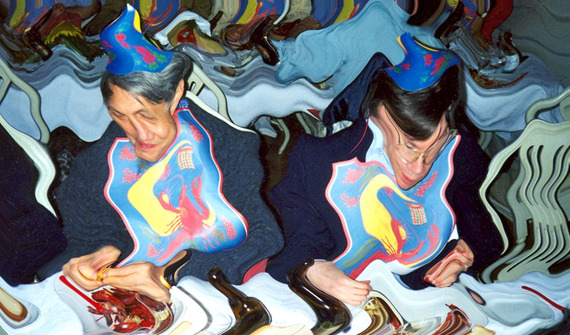 Alan Guth and Andrei Linde, whose theory of cosmological inflation had predicted this distortion, are here at the press conference, looking even happier than in the top photo. If they instead looked distorted as in the bottom photo, you might wonder whether someone had slipped LSD into your morning coffee. Or whether gravitational waves -- distortions in the very fabric of spacetime -- were passing between you and them, bending the light rays that you see. BICEP2 has shown that humongous gravitational waves that are billions of lightyears long are distorting their cosmic baby picture.

Making such strong gravitational waves requires extreme violence. For example, a cataclysmic collision of two black holes squeezing more than the Sun's mass into a volume smaller than a city can create gravitational waves that the US-based LIGO experiment hopes to detect -- but these waves are only about as big as the pair of objects creating them. So what could possible have created the vast waves BICEP2 saw, given that our universe seems to contain no objects large enough to make them?

The answer to this question explains why Alan and Andrei are smiling: their inflation theory in its simplest form predicts that our universe was once smaller than an atom, repeatedly doubling its size every 0.00000000000000000000000000000000000001 seconds or so, rapidly becoming sufficiently large and fast-expending to produce the Big Bang that our old textbooks had had no explanation for, with all that hot plasma that later cooled and clumped into the galaxies, stars and planets that adorn our universe today. This rapid doubling was violent enough to create gravitational waves of precisely the strength and length that BICEP2 has observed!

To me, this is the smoking-gun evidence that inflation really happened. I think that if it holds up, it will go down as one of the greatest discoveries in the history of science. BICEP2 has pushed our knowledge frontier back 38 orders of magnitude in time in a single giant leap, from the creation of Helium seconds after our Big Bang to inflation during the first few trillionths of a trillionth of a quadrillionth of that first second. This teaches us about physics at energies a trillion times greater than the Large Hadron Collider.

It's a sensational breakthrough involving not only our cosmic origins, but also the nature of space: by producing the first-ever detection of Hawking radiation (the process by which inflation's rapid doubling generates these gravitational waves), the BICEP2 team has found the first experimental evidence for quantum gravity. In my book Our Mathematical Universe I explore how remarkable it is that we humans can successfully predict so much about our cosmos with mathematics -- and here we go again!

Andrei Linde looks particularly happy today, perhaps because two numbers have now been measured that act as a sort of fingerprint of inflation, and they both agree beautifully with the specific predictions of his own favorite brand of inflation known as ``quadratic", where these numbers are 0.96 and 0.15, respectively.

Today is a great day for most scientists except multiverse skeptics -- at least in this particular universe. Alex Vilenkin, Andrei Linde, Alan Guth and others have shown that inflation generically predicts a space that is not merely large but infinite, teeming with duplicate copies of our civilization living out countless variations of our lives far far away. Now it's harder for skeptics to dismiss this by saying "inflation is just a theory": first they need to come up with another compelling explanation for BICEP2's gravitational waves. Today is also disappointing for the ekpyrotic/cyclic models that had emerged as the most popular alternative to inflation: they are ruled out by BICEP2's gravitational wave detection.

Once the celebrations are over, we'll look forward to seeing whether today's announcement stands the test of time. The wait won't be long, since several other experiments have been racing against BICEP2, and will soon have the data to confirm or refute their findings. Many questions should get cleared up already in October, when the Planck satellite experiment is due to releases its first polarized images of the cosmic plasma. But first, let's celebrate one of the most exciting moments in the science the history of science!