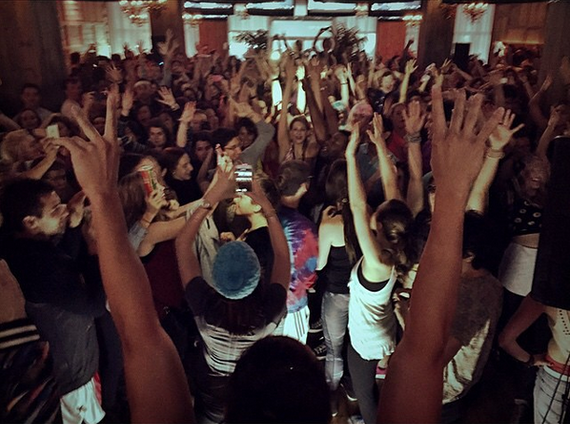 Preparing for a night out is an involved process that takes a lot of effort. You first need to rally a solid group of friends who won't flake, then select an outfit that is sexy but not slutty, and apply a pound of makeup to cover that zit on your forehead. But the last time I "went out" in New York City, I did none of the above. I ditched the stilettos and the sparkly top for a pair of sneakers and black yoga pants. Instead of spending hours straightening my hair, I scrunched it in a messy bun. I put on some face lotion and ChapStick instead of blush and lipstick.

Yet, I still woke up at 5:30 a.m. to get ready. After all, I wasn't going to an ordinary dance party, but to Daybreaker, an early morning movement that kickstarted my day like nothing else. 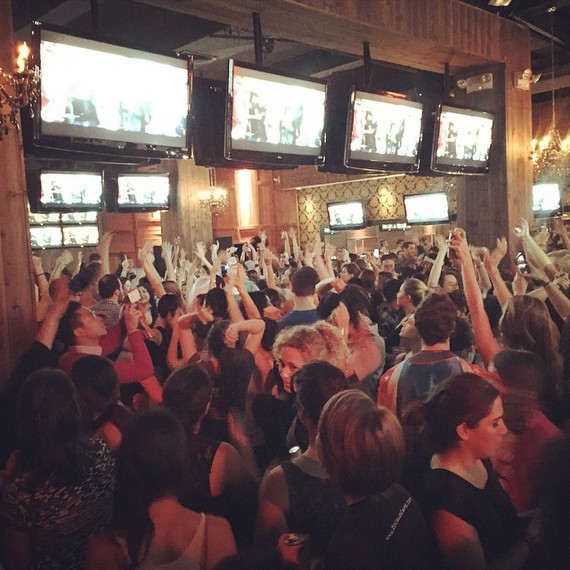 Founded about a year ago, Daybreaker is a dance party series that encourages people to hop on the dance floor--not treadmills--to boost their mood, get an intense work out, create a community of camaraderie, and have tons of fun. Each two-hour, alcohol-free dance party kicks off at 7 a.m., and features live DJs providing uplifting beats, performance artists tooting their trumpets, and plenty of costumed dancers showing off their best moves. This revolutionary morning movement has rapidly spread across the world, hosting dance parties at different venues and cities like San Francisco, London, and Los Angeles throughout the year. 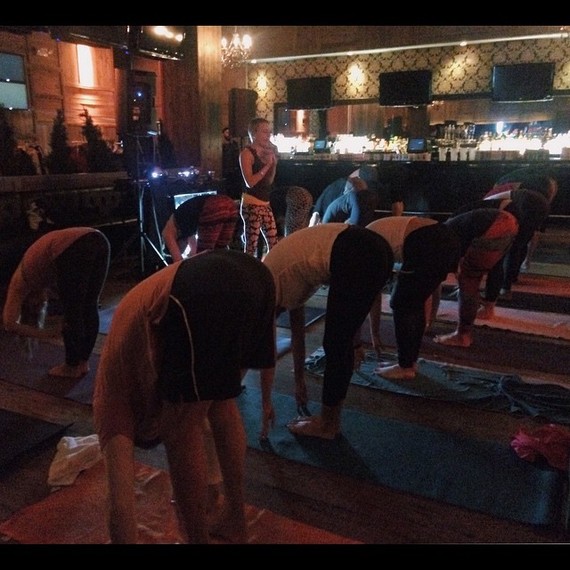 I arrived at Ainsworth -- a sports bar in Flatiron that served as the venue for 2015's first Daybreaker in mid-January -- an hour earlier than most people for the optional yoga at 6 a.m. Although there wasn't much room to spread out and stretch at this sold out session, my stiff body felt much more relaxed and warmed up for the forthcoming dance party. 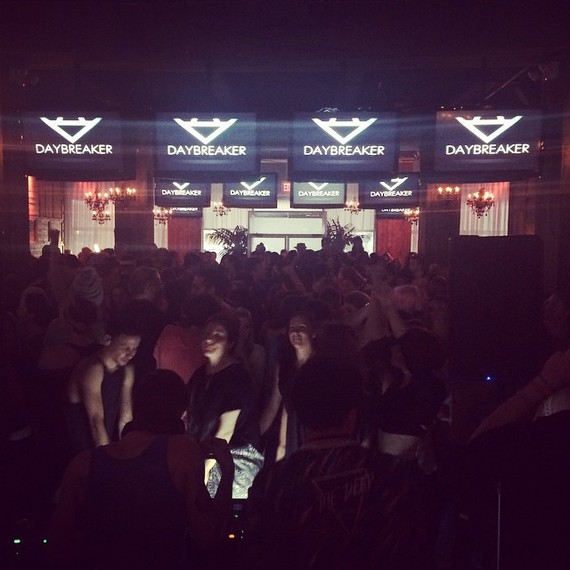 As more people trickled into the venue at 7 a.m., the zen music picked up its beats and turned into electronic dance music. While the attendees, who were still half-asleep, initially swarmed near the bar for complimentary coffee, tea, and other caffeinated drinks, the party picked up when a live brass band meandered through the crowd while playing their upbeat music. 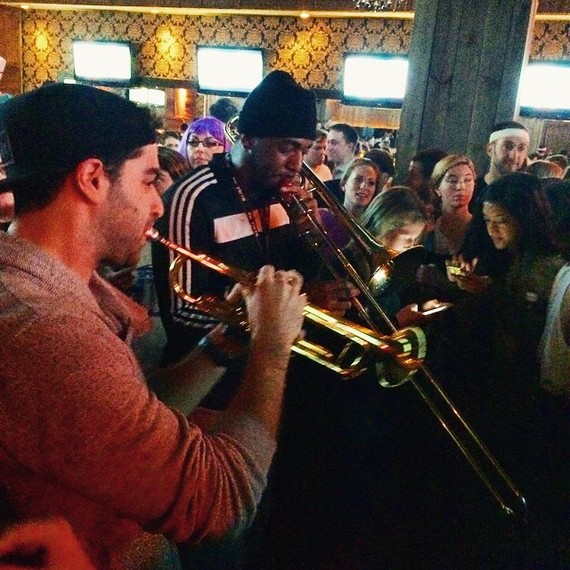 Soon, the room got sweaty with more than 500 attendees dancing the morning away. After grooving for about an hour, I approached the bar to browse through the selection of non-alcoholic drinks on the counter. As I drank from a bottle of unsweetened guava drink to hydrate myself from all the dancing, my eyes fixated to a packed room of Daybreakers. 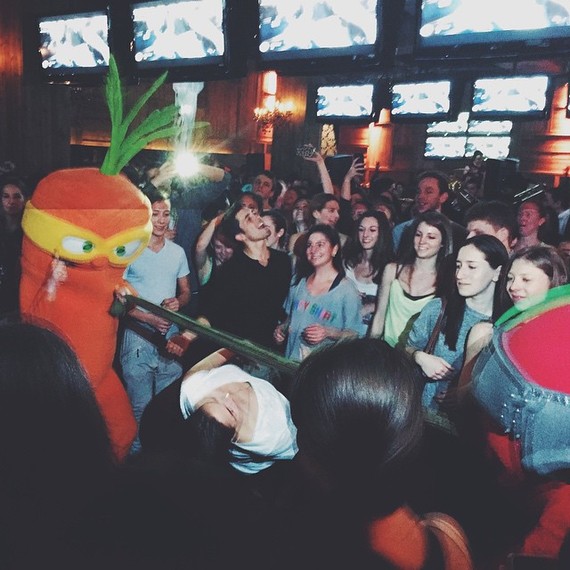 There were glow-in-the-dark jellyfish balloons, acrobats hula-hooping, and life-sized carrots and tomatoes doing the limbo. The numerous TV screens that were showing football games the night before were flashing videos of the scenes that people have instantly uploaded on social media. 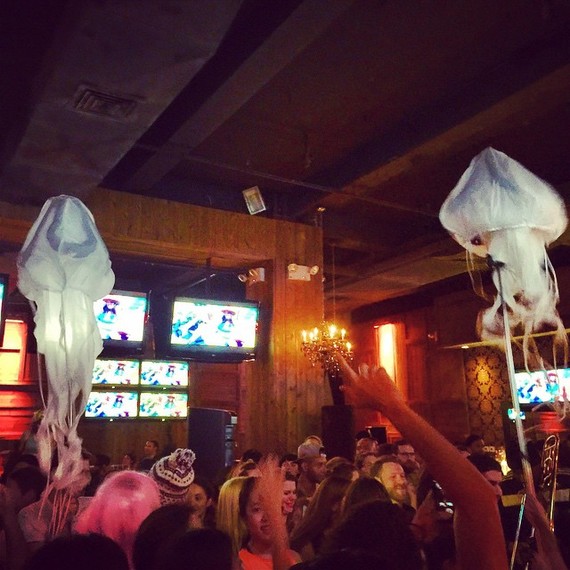 Once the sunlight began beaming in through the tinted windows, people collected their laptop bags and suit jackets. My friends and I also wiped the sweat off our forehead and got ready to officially start the day...but not before taking a souvenir picture at a photo booth. 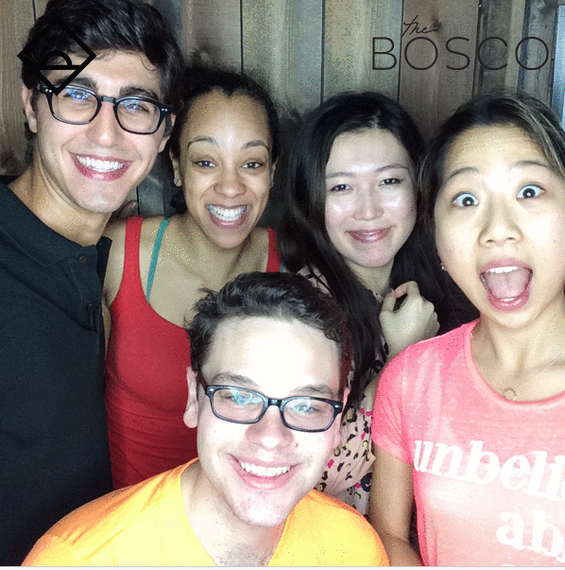 This healthy and energizing clubbing experience was truly unique, helping me gain a newfound appreciation for wellness. I really have gained so much. Of course, other than losing a couple hours of sleep, that is.