I was born in 1931 during the Great Depression. We lived in a working class neighborhood in Cincinnati with many country people who had migrated from the hills of Kentucky and Tennessee. Lots of men in my neighborhood were out of work. Many hadn't had a job in several years. In fact, the New Deal programs often didn't reach us until four or five years after Roosevelt was elected.

Next door to us lived a jobless family with three kids. They were from the Cumberland Valley in Kentucky. My Irish Catholic mother felt uneasy about our neighbor, because the kids wore raggedy clothes, seemed dirty most of the time and were often what she viewed as "out-of-hand." I'm sure she would have preferred that we lived in a neighborhood like the small Ohio town where she was raised, but we were lucky to be in Cincinnati because my dad had a job.

Almost every evening, my mother prepared a dinner for 10 people -- enough for the five of us and the five neighbors next door. She continued doing this until our neighbor finally got a job.

We also had an old car. Most of our neighbors didn't. When they needed to go somewhere important where you couldn't walk or take the streetcar, they asked my dad if he would drive them. He always made the time. 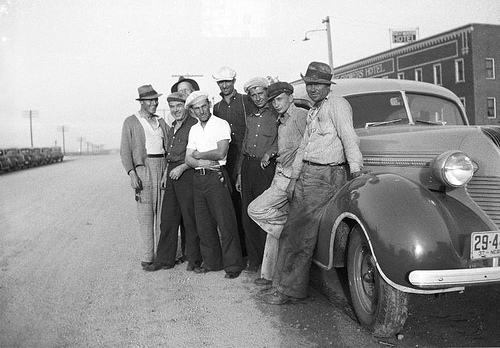 One day the father from next door told my dad that the Tennessee Valley Authority was building a dam that would flood his hometown and make it into a lake. He wanted to see his birthplace one last time, so my dad drove him down to the Cumberland Valley and took me along. I was about 8 years old, and this was my first long trip. The neighbor man sang country songs and told stories most of the way. That trip is still one of the most memorable events of my childhood -- my dad, our neighbor and me.

When I was in my thirties, and most Americans were doing pretty well, I asked my mother and father why they had made dinner and drove the car for the people next door. I thought they probably did it out of a sense of charity. I was wrong. Instead, they said, "Well, everyone was helping each other back then. We weren't any different. What would that family have done if we didn't give a hand? And besides, they were our neighbors."

I've done some reading about the Great Depression. There were millions of people out of work throughout the '30s. But millions survived because of help from kinfolk and the support of their neighbors. My dad, like lots of people back then, had a greeting, "Hi, neighbor." What he meant was, "We're in this boat together." He expected neighbors to help him if he was down and out.

What do you think would happen among our neighbors if millions of unemployed people ran out of unemployment compensation? Would we make dinner for them, drive them where they needed to go and help find them a job?

Across America, families are being decimated by foreclosures of their homes, and this usually happens because they have lost a job. Some of them live in our neighborhoods.

What do your neighbors do to support those families? Powerful neighbors in strong neighborhoods would say, "I don't know what that family would do if we don't give them a hand. Of course, we have to do it, because they are our neighbors."

John McKnight is emeritus professor of education and social policy and co-director of the Asset-Based Community Development Institute at Northwestern University. He is the co-author of "Building Communities from the Inside Out" and the author of "The Careless Society." He has been a community organizer and serves on the boards of several national organizations that support neighborhood development. Peter Block is founder of Designed Learning. They are coauthors of "The Abundant Community: Awakening the Power of Families and Neighborhoods" (Berrett-Koehler).

For more commentary from McKnight and Block visit their website www.AbundantCommunity.com

More:
healthy livingneighborhoodneighbor
Newsletter Sign Up
The essential guide to taking care of your mind and body
Subscribe to HuffPost’s wellness email
Successfully Subscribed!
Wellness delivered to your inbox

Co-author, "The Abundant Community: Awakening the Power of Families and Neighborhoods"