As we approach the deadline of the Millennium Development Goals (MDGs), we can observe that significant progress has been made toward achieving this set of targets over the last decade. The latest State of Food Insecurity in the World report shows that a total of 72 developing countries out of 129 have reached the MDG 1c hunger target and, for the developing regions as a whole, the prevalence of undernourishment, along with the proportion of underweight children under 5 years of age, have declined.

Despite this progress, the burden of undernutrition still affects 795 million people in the world, including 161 million stunted children. Malnourished children tend to start school later, have poorer levels of concentration and lower scores in cognitive ability tests; they are unable to reach their full potential and this burden continues throughout their lives. This represents one of the main challenges the planet is facing today and has devastating socio-economic consequences for all countries tackling the complex issue of malnutrition in all its forms.

So, why are some countries succeeding in reaching the international hunger targets, while others are falling behind? Humanitarian crises and political unrest are not the only causes that prevent countries from falling short. Lack of credible and sustained political commitment to tackle the issue of malnutrition also negatively contributed to this outcome. Governance in the nutrition sector plays a key role in driving and sustaining efforts against the multiple causes of malnutrition -- a key finding of the last Global Nutrition Report.

A good example of a government that demonstrates strong political will and commitment against undernutrition is in Ethiopia. Historically, conflicts, droughts and other periodic humanitarian crises have caused high levels of food insecurity in the country and the consequent rise of chronic malnutrition rates among the population. To face these complicated challenges, since the early 2000s the government of Ethiopia has been focusing on eradicating poverty through a comprehensive economic reform programme and addressing malnutrition.

Following the launch of the National Guidelines for Control and Prevention of Micronutrient Deficiencies in 2004, the government decided to strengthen further its commitment to end undernutrition by adopting the first National Nutrition Programme (NNP) in 2008, which was subsequently revised in 2013.
Nutrition became a key priority of the national Growth and Transformation Plan.

GAIN has been supporting these efforts, the Universal Salt Iodization Partnership Project is one example -- a partnership with UNICEF and in conjunction with the Micronutrient Initiative. At the start of this partnership project in 2008, only a small percentage of households had access to adequately iodized salt and iodine deficiency was a major public health problem, leading to mental impairment. Recent findings show that the availability of adequately iodized salt in Ethiopia is rapidly increasing. The 2014 National Micronutrient Survey found that the presence of iodine in salt had increased from 15 percent in 2011 to 95 percent. Adequate iodine levels were also up to 43 percent in 2011 compared to 5 percent in 2009. The Food, Medicine and Health Care Administration and Control Authority of Ethiopia (FMHACA) reports that household coverage of iodized salt is continuously increasing, attesting significant associated health benefits.

Since 2011, GAIN has also supported the government in the micronutrient fortification of wheat flour and oil through developing national food standards, and recently started formative research to explore the appropriateness of national distribution of micronutrient powders or home fortification in rural Ethiopia.

The public health measures put in place by the Government of Ethiopia have proven to be successful. A recent government survey showed a decline in stunting among children from 57.8 percent in 2000 to 40 percent in 2014, and a drop in the prevalence of underweight over the same period from 42.1 percent to 25 percent. Additionally, the government made significant progress in tackling poverty with a 33 percent reduction in the share of people living under the poverty line between 2000 and 2011.

At the recent Financing for Development Conference held in Addis Ababa on 14-16 July, the government of Ethiopia took the opportunity to reiterate its willingness to break the cycle of poverty and malnutrition. On this occasion, the government adopted the Seqota declaration, which aims to end child undernutrition in Ethiopia by 2030. Named after a region in Northern Ethiopia that has been one of the most food insecure areas in the country, the Seqota declaration represents a reference and a reminder to raise awareness against child undernutrition.

GAIN, together with the Children's Investment Fund Foundation, the Bill & Melinda Gates Foundation, and the Micronutrient Initiative welcomed this commitment from the government, as it recognizes that that ending malnutrition is essential to achieving sustainable development, and strongly supported the declaration at its launch ceremony on 15 July. This is an excellent example of how government action can help shape nutrition policies to promote nutritious foods for the population, and at the same time, effectively engage other stakeholders.

But Ethiopia is not the only African country stepping up its fight against malnutrition. The government of Tanzania is also taking the lead in this fight. At a recent Scale Up Nutrition Movement meeting in Daar es Salam, President Kikwete presented remarkable results in reducing stunting by 18 percent since 2010, and called for effective nutrition funding and private sector involvement in the nutrition agenda. Moreover, from 9 to 11 September 2015, the government of Tanzania and GAIN will co-host the first Global Summit on Food Fortification #FutureFortified as part of a global effort to reinvigorate interest, awareness and investment in food fortification. Other co-conveners include the African Union, Bill & Melinda Gates Foundation, USAID, UNICEF and the World Food Programme. 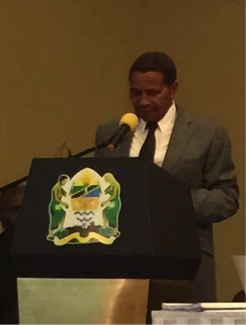 It is impressive to see these African governments leading by example, but we need to keep momentum going. Leveraging these efforts, in order to stimulate commitment from more governments will be essential if we are really serious and committed on the global platform to reach the upcoming sustainable development goals and to keep nutrition high on the development agenda now and in the future.