The then-head of the Business Roundtable warned, "There's no question that rising health care costs are one of the biggest threats to families, businesses and U.S. competitiveness," and the then-CEO of General Motors said, "Failing to address the health care crisis would be the worst kind of procrastination, the kind that places our children and our grandchildren at risk and threatens the health and global competitiveness of our nation's economy."

A decade later, the United States is in the midst of a historic slowdown in health care cost growth that is helping to increase workers' take-home pay, cutting businesses' costs, and forcing budget analysts to recalibrate earlier, more pessimistic projections. This slowdown in health care cost growth ranks as one of the most important recent developments in our economy, yet it has received comparatively little attention outside of health policy circles, and the broader media coverage has often missed the overwhelmingly clear positive story, focusing instead on the occasional, isolated contrary data points.
Consider: 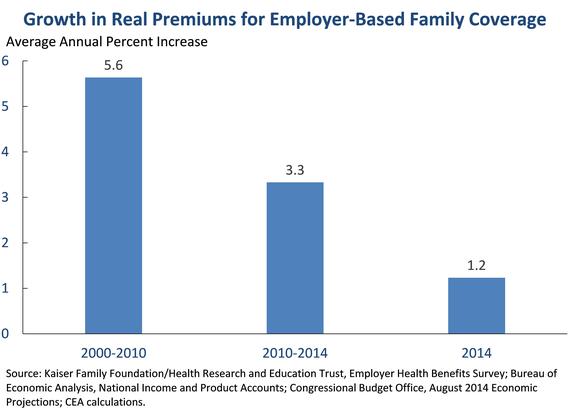 While growth in aggregate health care spending will temporarily pick up over the next few years as millions of Americans gain coverage and can finally get the care they need, the data catalogued above show that the underlying trends in health care prices, premiums, and per-enrollee costs that gave rise to these record-breaking years are continuing.

The economic implications of the health care cost slowdown are immense. Take today's news on employer premiums. If instead of the slow employer premium growth we have seen since 2010, premium growth had continued at the rate witnessed over the prior decade, then average premium for employer coverage would be $1,800 higher in 2014. These savings make it easier for employers to add jobs today and will ultimately translate to bigger paychecks for workers.

Recent trends have also sharply improved our nation's fiscal outlook. Since August 2010, CBO has reduced its projection of Medicare and Medicaid spending in 2020 by $188 billion, due largely to recent health care cost trends. These savings are on top of the direct effects of the Affordable Care Act, which the agency previously estimated would shave more than $100 billion from deficits over ten years and reduce deficits by an average of 0.5 percent of GDP per year over the following ten years. These savings total $1.7 trillion over the law's first two decades.

Exactly what caused the slowdown in health care costs and whether the slowdown will persist is the subject of a vigorous ongoing debate among academics and other observers. The deep recession, which squeezed families' and businesses' budgets and caused many to lose employer coverage, almost certainly played some role. As the economy recovers, any effects of the recession in reducing health care cost growth will continue to recede.

But, as the Council of Economic Advisers discussed in detail in this year's Economic Report of the President, the recession is far from the whole story. The slowdown has been dramatic even in Medicare, where beneficiaries are largely insulated from changes in the labor market, not just private insurance. Moreover, the latest slow growth in employer premiums coincided with a year in which the economy was five years past the end of the recession and added 2.4 million jobs, cutting the unemployment rate by 1.2 percentage points. 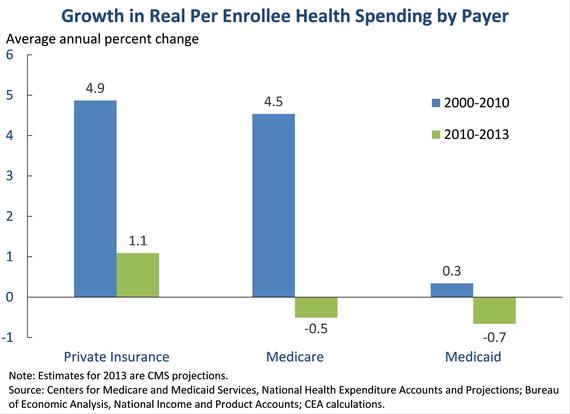 A growing research literature suggests that the benefits of these reforms will not be limited to Medicare. Rather, this research finds that changes in the level and structure of Medicare payments are frequently adopted, at least in part, by private insurers as well, generating savings throughout the health care system.

Looking ahead, it is impossible to know with certainty what the future will bring for health care costs, which have historically been difficult to predict. But it is striking to note that if even as little as one-third of the recent slowdown persists, then, by 2023, national health expenditures would be $1,200 per person lower than if cost growth returned to the prior trend. Savings of that magnitude, on top of the dramatic savings that have already been achieved, would be transformative for families, businesses, the federal budget, and our economy. In the years ahead, the president will remain focused on creating a health care system that delivers efficient, high-quality care in order to make these savings a reality.