Every two weeks, Dan, Elliott and Stuart gather in Dan's apartment to watch a movie that they assume will be a flop-based not on box office earnings, but rather on critical reception -- and then put down their beer bottles, put on a microphone and tell us about it.

I love to hate truly bad movies, and enjoy a lot of bad movies that I consider to be pleasantly silly. Friends and family used to drag me to the theater to see movies I was unlikely to enjoy, but they have since learned their lesson, and they rarely do that anymore. They were, at times, very creative about getting me to go along. Once either guilt-tripped or persuaded into my seat, I'd brood resentfully, but quietly, thinking that my physical presence at the movie meant that I'd lost.

I eventually realized that sharing my inner monologue with whomever was responsible for dragging me to Ghost Rider (you know who you are, and I will let it go the very day I get those wasted hours back) was a great way to keep myself entertained (I find myself hilarious) and deter my companion from trying to get me into another bound-to-be-bad movie.

By the time Sex and the City 2 began sapping audiences everywhere of their will to live, all I had to do when invited to a movie was quirk one eyebrow, Colbert-style, and allow a meaningful silence to remind my would-be companion what it's like to accompany me to a movie I'm bound to love to hate.

I suspect the reason that so many of my friends were more amused by The Flop House than my stream of consciousness tirades was not just that Dan, Elliott, and Stuart tend not to be recording in a theater during show time, but because where I am bitter and angry at the movie, the Flop House guys are likeable and amused. They are also incredibly witty and quick.

My favorite part of the hour-long episode is often Elliott's attempt to summarize the plot of the movie, usually with great difficulty, either because the plot is convoluted or because Dan and Stuart's interjections derail the summary and have all three of them cracking each other (and the listeners) up pitching a crazy movie that would be better than the one they watched. Or, frequently, just listing things, such as "words that sound like other words."

Occasionally, they'll stray far enough off course that they're lost themselves, and then either Stuart will helpfully ask, "Is this a bit?" or Dan will wrangle the conversation back on track.

Once Elliott either feels that we have a good enough understanding of the plot or is tired of talking about it, the three break down some of their favorite and least favorite scenes. After everyone has said everything they care to about the movie, Dan, Elliott, and Stuart issue their "final judgments" of the film. Generally, the categories are 'bad-bad movie,' for a movie that they disliked, 'good-bad movie,' for a bad movie that had some redeeming qualities or was otherwise enjoyable, or 'a movie [I] kind of liked." During Shocktober, when the trio watches horror movies, the categories are 'frighteningly funny,' 'totally scarifying,' or 'totally snorifying.'

Listeners can send in emails, which are read after final judgments have been made. Dan, Stuart, and Elliott recommend movies that they enjoyed to prove to us that they aren't miserable people who just hate everything. More often than not, Stuart recommends Castle Freak, much to Elliott's dismay.

Several long-running jokes, made all the more mysterious to me by my decision to listen to many of the episodes in reverse order beginning with the most recent ones, include the yowling Flop House House Cat character (which may or may not be Stuart), will be mystifying the first time you listen if you choose to begin with a recent episode. However, my first reaction to each host--beginning to feel pity for the long-suffering Dan, bemusement at Elliott's arsenal of odd facts one assumes can only be amassed over a lifetime of NPR-listening, and falling in love with Stuart -- proved to be fairly accurate tropes.

My favorite Flop House experience to date, though, was their live event earlier this month. Partnered with the authors of I Love Bad Movies magazine, the Flop House hosted a screening of the 1986 movie Quiet Cool, starring James Remar at 92YTribeca. Dan, Elliott and Stuart provided a running commentary while we watched the movie, and had trivia and brief comedy bits before and after the movie as well as during a brief intermission. Afterwards, they graciously hung around to meet Flop House fans. They have indicated that they plan to do this regularly, so stay tuned for your chance to go see Dan, Stuart, and Elliott talk over a movie. 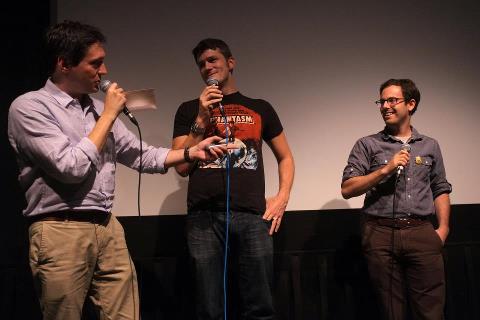 You don't need to have seen the movie they're discussing for it to be funny. In fact, I think it's often funnier when you haven't seen it, and are forced to piece together the plot as Elliott recounts it not in chronological order, but, evidently, in descending order of what makes him angriest. If it's terribly important to you that you grasp all of the finer plot points of a movie that's probably only pretending to even have finer plot points, sure, watch it. Or read the Wikipedia plot summary. But I prefer to let the story piece itself together while I listen.

If you've ever paid to see a move you disliked, or gone to see Nicholas Cage movie -- but I repeat myself; let's just say if you've ever begrudged the price of a DVD or a ticket after seeing the movie -- The Flop House is right for you. Dan, Elliott, and Stuart will avenge your wasted time and money, and they'll do so in a far more lighthearted and amusing way than most of us ever could.