I believe in Karma. I believe if you do good then good will come to you. I surround myself and my son with as much positive energy as I can and avoid negativity. Almost a year ago I wrote a blog; An Open Letter to Michelle Duggar-Ignorance is Not Bliss. I hesitated to take on the Duggars and their ignorance because of the negative energy it might bring but felt I had to stand up for my son and for transgender people everywhere. I expected some of the negativity but I never expected the huge amount of positivity I received. I received over 350 emails with over 300 of them being very positive. It was clear to me by this response that the Duggars karma would catch up to them and that I just needed to let the universe do its thing. Little did I know what the universe had coming for us all.

Michelle Duggar was quoted when discussing a potential law that the City Council of Fayetteville, Arkansas was considering. This new law would protect citizens against discrimination in employment, housing and public accommodation on the basis of their sexual orientation, gender identity, socioeconomic background, marital status or veteran status. Michelle resorted to fear tactics when warning Fayetteville residents that she believes transgender people are: "child predators" and that the law would protect their predatory behavior. Isn't it ironic that the real predator all along that Michelle was even aware of when she made these ignorant statements was NOT a transgender person but instead it turned out to be her own son: Josh Duggar. I could go on about how Michelle owes the transgender community an apology. I could go on about how this type of fear mongering behavior only corrupts and breeds more hate. I could chastise Josh Duggar and express my sympathy for his victims. I could but what good would it do? As Martin Luther King Jr. said "Darkness cannot drive out darkness; only light can do that. Hate cannot drive out hate only love can do that." TLC has wisely taken heed of Martin Luther King Jr's words and is bringing us that light we so desperately need. That light is called: I am Jazz. 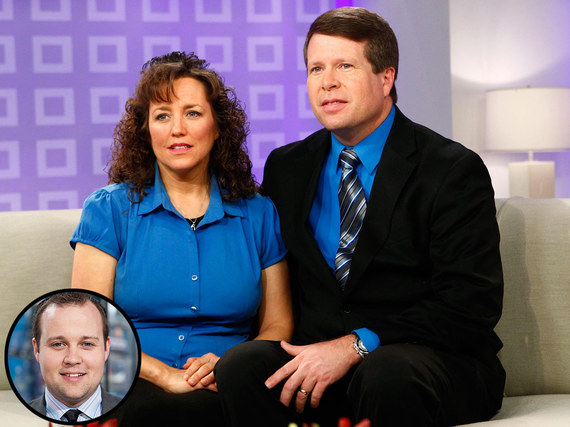 In 2007 I had suspicions that my then "daughter, Grace" was transgender. I heard about an upcoming Barbara Walters special called: "My Secret Self". I remember watching it quietly alone in my bedroom at night when Grace was asleep. It was as if I was keeping a secret too. I became immersed in this amazing special that would help change my life for the better. I remember being in awe of these amazing parents and their very brave children. I remember in particular being strongly affected by the lovely young Jazz's story and her family especially her mom: Renee. I cried as I watched wondering if this was my fate and my child's. But Renee gave me hope. I was so touched by the abundance of unconditional love she had for her daughter. I knew how very difficult it must have been for her to open her heart to the whole world and how scary it must have been. But it was clear she did it to make the world a better place for her daughter and to help others out there accept transgender children. She wanted to touch other parents and ensure them that they weren't alone. She did just that and then some. My heart was opened by Renee's courage and genuine kindness and it would remain open when I need it most. I promised myself that if my child was transgender I would be just like Renee. This was a promise I would keep.

In 2010, many months into my son's journey coming out as transgender I was home scanning posts on an online support group for parents of transgender children. I was so very excited to see a post from a woman who signed her post something to the effect of "Mom to Jazz from the 20/20 special, Jeanette" followed by her cell phone number. Jeanette? I thought her name was Renee could this be her? I thought she probably used a fake first name. Should I reach out to her? Well, she left her cell phone number so why not? I had to thank her. I had to tell her how she touched me. I had to tell her that she helped save my son's life. I called and left a message on her cell phone. I rambled on and worried I sounded like a blubbering idiot. But to my surprise she returned my call shortly after my message. She was warm and kind and humble just like in the special. She reassured me and comforted me. We found we had the same views and worries for our children. We had many of the same likes and dislikes. So began the start of a lifelong friendship. I was touched by an angel.

Jeanette and I became close friends and began conducting a workshop together at the Philadelphia Trans Health conference with our amazing kids in 2012 and have presented every year since. Jeanette nicknamed our workshop: The Love Fest. I am so thrilled that TLC has decided to steer away from the negativity of the Duggars and instead will be airing their very own love fest in their new docuseries about Jazz and her family called: I am Jazz. You all will be able to partake in the love fest when it begins airing on Weds. July 15th at 10pm Eastern on TLC.

Jeanette and I in Philly 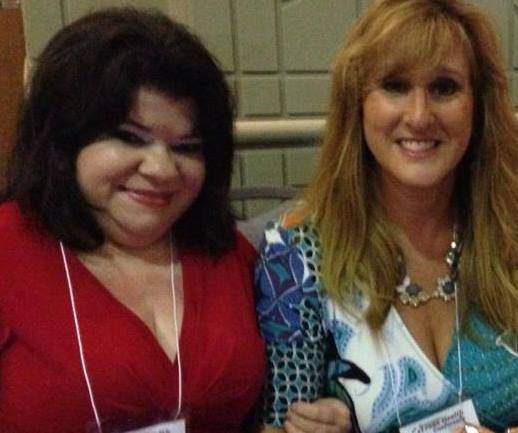 Chris and Jazz in Philly 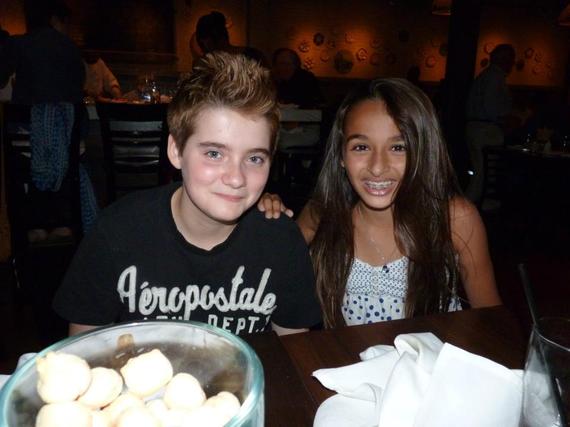 Jeanette and I along with our amazing kids conducted our most recent love fest in Philly this past June. We all spoke about our stories with love and Jeanette presented a beautiful video as well as a video reading of Jazz's new children's book: I am Jazz. We then invited other parents of transgender children and their kids to speak themselves. There wasn't a dry eye in the room as parents expressed their pride for their brave children and children expressed their thanks for their loving parents. Although this was touching what I believe touched everyone the most was a transwoman whose voice shook as she spoke. Her name is Robyn. She said she had recently transitioned. She had been through much trauma in her life but what seemed to hurt her the most was her lack of support. She said she had no friends and her family did not support her transition. She spoke with such sadness. She said she had just discovered that an article she wrote about her transition was just accepted by the New York Times. She expressed how although this should be a joyous occasion for her she felt nothing but sadness in her room the night before because she had noone to share her good news with. At the very moment she expressed this longing for support every single person in the room stood up and gave her a standing ovation. Jazz asked her mom if she could hug her and she ran up to hug Robyn. Jeanette followed with a hug of love and support as did I and my son and several audience members as well. Robyn was stunned and overwhelmed with the love she received in that room that day. Jeanette and I have since befriended her to assure her that she'll never be alone again. That moment of love an acceptance that day will stay with me forever as one of the best moments of my life. I assure you that if you tune in to TLC's I am Jazz you too will experience such glorious moments of love and acceptance.
Jazz signing her book in Philly in 2015 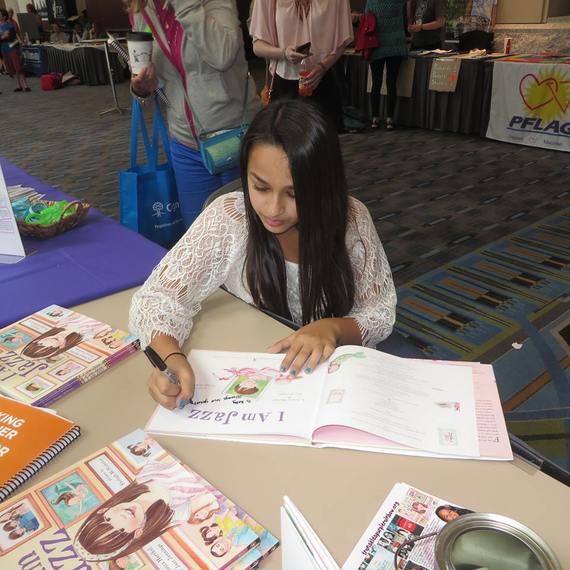 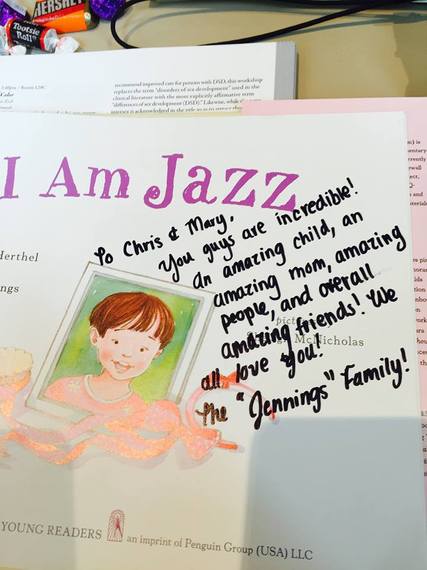 Myself, my son and Jeanette and Jazz in Philly in our 2015 Love Fest 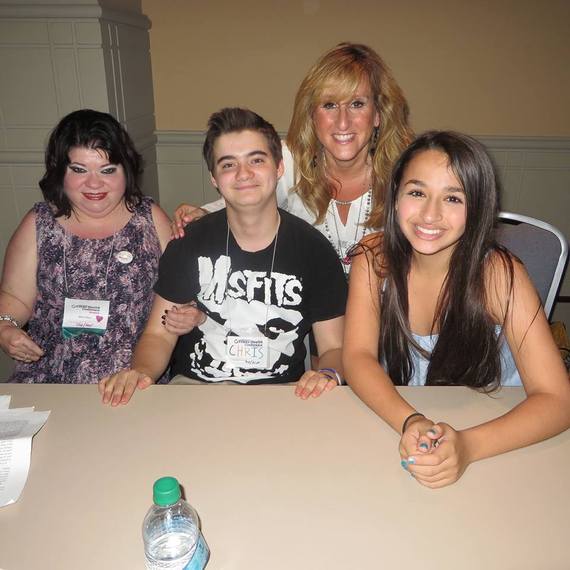 So instead of focusing on the hatefulness of Josh Duggars act or the ignorance the Duggars continue to express I ask that you join me in the love fest that the Jennings will surely bring to you and your family. I cannot however promise they will not ever bring you pain. After watching I am Jazz; your mouth will grow tired from smiling, your eyes will dry up from shedding tears of joy and your heart will grow sore from opening wider than it ever had before. I promise the Jennings will leave you a changed person as they have my son and I and everyone they have touched. Run don't walk to watch I am Jazz on TLC on July 15th and join me in showing the world that love really does conquer all.

Mary J. Moss
(feisty single mom to a terrific almost 16 year old boy who just happens to be transgender)
Email me at: transparentmary@gmail.com
Tweet me at @MsMaryMoss