When I left the backroads of Pennsylvania late in 2007 to drive to Los Angeles, I scribbled these words onto a scrap of paper: Ray Bradbury will be my friend and mentor. I didn't know how this friendship would happen exactly, but I knew in my heart that it would. I also didn't know why I needed his friendship at that time in my life, but I hoped to discover that as well.

When I was eleven, Ray's books blossomed, like my grandfather's pond lilies, in my young mind. The stories I discovered inside tattered paperbacks like The Illustrated Man, Something Wicked This Way Comes, The Martian Chronicles and Fahrenheit 451, carried my imagination away from my limited rural life, far from the cold winter winds that rattled my bedroom windows and chattered my teeth. Tucked deep inside the thick blankets that my Mennonite grandmother knitted for me, I read all Ray's stories with wide-eyed wonder -- short stories like The Veldt, Marionettes, Inc. and my favorite, The Long Rain. His description of distant planets mesmerized me. How could a boy's mind not soar with opening words like these:

"The rain continued. It was a hard rain, a perpetual rain, a sweating and steaming rain; it was a mizzle, a downpour, a fountain, a whipping at the eyes, an undertow at the ankles; it was a rain to drown all rains and the memory of rains. It came by the pound and the ton, it hacked at the jungle and cut the trees like scissors and shaved the grass and tunneled the soil and molted the bushes. It shrank men's hands into the hands of wrinkled apes; it rained a solid glassy rain, and it never stopped."

By the time I was out of college, I knew I wanted to be a writer. But for a Pennyslvania farm boy, the idea seemed as far-fetched as traveling to one of Ray's distant imaginary planets. Yet, I still felt the need to connect with the man who inspired these thoughts. I needed to learn his secrets. How do I make people feel the way he made me feel?

When I finally arrived in L.A., 3,000 miles and many years later, to pursue my dream of writing and producing, I didn't know anyone. So on Christmas morning, after an early holiday phone conversation with my family on the East Coast, I decided to quell my sudden loneliness by snapping Southern California pictures for my friends back home. Buying a star map on the Santa Monica Pier, I took photos of celebrated mansions in nearby Brentwood and the Palisades. It was then I got the idea to drive by Ray Bradbury's house who, I discovered, lived only 20-minute away in Cheviot Hills. My plan was to take a quick photo of his abode before heading into Beverly Hills to James Stewart's and Frank Sinatra's former homes.

Pulling across the street from Ray's house, I was immediately struck by its simplicity. The yellow paint was slightly chipped, and the roof in a bit of disrepair. It was homey and inviting, and seeing it warmed my heart. Wow, this is where Ray Bradbury writes, I thought. Glancing at my car clock, I saw it was a little after 10:00 am. I had much more territory to cover that day, so I decided I'd better get going. Putting my car into gear, I started to pull ahead when a curious thought entered my mind: Back home I don't really do anything on Christmas mornings... until noon. Then I get together with my family for dinner. Maybe Ray is the same way.

Parking my car, I strolled up the side steps and knocked quietly on his door. I was surprised when a young, African-American man in his early thirties answered. "Hi," I said, "Is this, um, Ray Bradbury's place?"

"Oh hello," I said, "I'm a writer from the East Coast. Ray's work was a massive influence on me. I was wondering -- and please say no if this is an inconvenience -- I was wondering if I could say a brief hello. I know it's Christmas morning and all, and if it's any bother, I'm happy to leave."

The friendly fellow looked me up and down and, to my great surprise, said, "Sure, come in. I'll ask him."

And before I knew it, I was led into Ray's home.

The friendly fellow walked up the hallway, bound up two quick steps and disappeared into a room to the left. While I waited, I glanced to my left. Hanging on the wall was a framed illustration from one of Ray's book covers. Just beyond that was an open doorway, which led to the kitchen. To the right was the living room, filled with furniture and large toys.

After a minute, the friendly fellow returned and said, "Okay, Ray will see you." He showed me to Ray's den. Entering the small room, the first thing I noticed was how gloriously unkempt it was. It was packed with decades of collected knickknacks from all over the world: Action figures in their original boxes occupied cabinet tops; a small green alien with almond eyes stood beside a nearby lamp; a bat dangled from a string; posters lined the walls; books -- tons of books -- filled old shelves. Looking down to my left, I saw the legend himself sitting there with a brunch table positioned over his knees. His hair was pure white, and his wise, yet childlike eyes -- just behind those famous black-rimmed glasses -- glanced up at me.

It was Ray Bradbury.

For the first and only time in my life, I gushed. "Oh my god, Mister Bradbury," I said, shaking his hand vigorously, "This is such an honor to meet you!" I then wrapped my arms around him and hugged him tight.

"I understand you're a writer," he said, when I finally let him go.

So I stepped over stacks of novels and boxes, nearly knocking over his Emmy Award that sat on a nearby table. Soon I was knee to knee with with my hero. I couldn't believe my eyes.

For the next 45 minutes Mr. Bradbury gave me writing advice. "Write what you love, and love what you write," was the first thing he said to me. Then he told me anecdotes about meeting his heroes Frederico Fellini and Gene Kelly, both of whom became his friends. Wow, I thought, he had heroes, too -- the gods have their own gods. He spoke about his battles with the movie studios over the years, and working for gruff director John Huston. I was spellbound by his genuine enjoyment of telling stories, and the boyish charm that glowed from inside his large, 87-year-old body. He overflows with love and passion, I thought. I felt an instant kinship with him.

"I heard you still write almost every day," I said. "Is that true?"

"Yes it is," he said. "I can't type any more, so I call my daughter, recite the stories to her over the phone and she types them up. I'm working on a play now," he said. It'll be at the Fremont Theatre in Pasadena in about a month or so. Why don't you join me as my guest?"

"Give me your information," he said, sliding a torn envelope and a green Sharpie marker toward me. "I'll let you know when it is.

A couple months later, to my great astonishment, I found myself sitting next to Ray in the front row of the theatre, watching his play on opening night. At intermission, I leaned over to him -- he was sitting in a wheelchair -- and I excitedly recounted all the scenes and lines that I loved in the first act. He didn't say a word. He simply smiled at me, like a grandfather does to a favorite grandson, then reached out and gently patted the top of my head. My god, I thought, the fingers that wrote all those stories that blossomed in my young mind are now touching my adult mind.

It was one of the greatest moments of my life.

Over the next four and a half years, I'd visit Ray on occasion. And on those visits he shifted from "hero on a pedestal" in my mind to an admired friend. Sometimes he'd show me cardboard boxes stuffed with his old typewritten stories, some of which hadn't been published. And I slowly realized that this wasn't a god after all, but a flesh and blood human being who, like me, grew up in a small town, and came to Los Angeles with a simple dream. He was a man who got up everyday and wrote, and sometimes his stories were rejected, even during the peaks of his impressive career. He was a person who shot for the stars as much as he could, and more than a few of his arrows landed there. Though his eyesight was failing and his hearing diminished, witnessing his daily attempts at greatness gave me permission to aim for the stars, too.

I was with Ray just a few months ago. He had just returned home from a long stay in the hospital. I noticed the color had returned to his cheeks. He was as sharp and slim as I'd ever known him to be. After the visit, I hugged him, kissed the top of his head, which was my custom by then, and assumed that I would have many more visits with him.

When I learned that he had passed away in his sleep last week, the news struck me like a welterweight's jab to my unsuspecting stomach. Normally I dealt with news of death really well. Growing up working on neighboring dairy farms, I experienced the cycles of birth and death more than most. But this particular time it dropped me to my knees.

I wept for the first time in years. And the tears were like rain and "the rain continued. It was a hard rain, a perpetual rain, a sweating and steaming rain; it was a mizzle, a downpour, a fountain, a whipping at the eyes..."

After a week's reflection on Ray's passing, gratefulness has replaced my stinging tears. The beauty of being a writer is that our thoughts -- the most intimate part of ourselves -- can live on through the ink in our printed words. And now, they can live in the vastness of cyberspace as well. And those who love you, or who discover your work long after you've passed, can visit you anytime they want, and find you living and breathing inside each of your stories. What a magical and precious gift.

I learned that from Ray Bradbury -- a writer from Waukegan, Illinois.

So tonight I'm going to tuck myself deep into my blankets here in my Santa Monica home, and read Ray's stories with those same wide-eyes I had as a child. Opening the tattered paperback I re-read his familiar words. And once again I'm carried away... 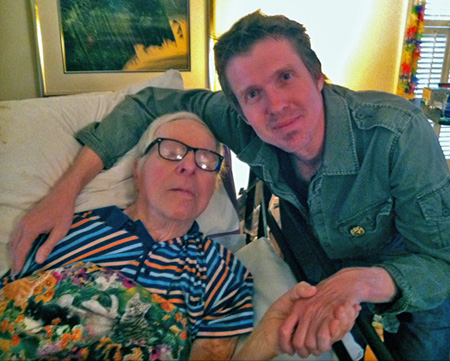