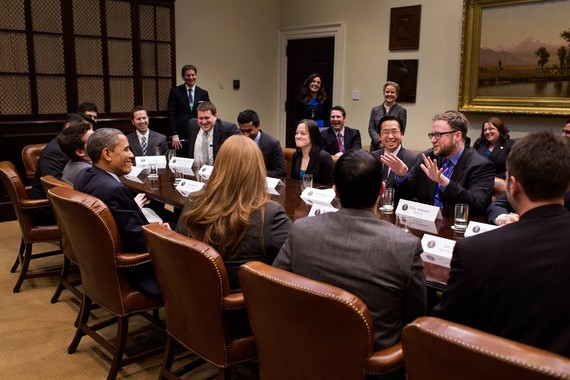 President Obama meets with the first class of Presidential Innovation Fellows in the White House, Jan. 25, 2013. The redhead is me. Credit.

TL;DR: I left my tech job in Silicon Valley to work for the government, joining 18F.

"The single most powerful word in our democracy is the word "we." We The People. We Shall Overcome. Yes We Can. It is owned by no one. It belongs to everyone. Oh, what a glorious task we are given, to continually try to improve this great nation of ours."  --  President Obama in Selma

Improvement can be sweeping, or incremental. In my case, it started with a nibble in 2012 when former U.S. CTO Todd Park tweeted he was "looking for a few good women and men to serve their country" as part of a new program called the White House Presidential Innovation Fellows (PIFs). What an honor to be part of the inaugural class of technologists coming to gov to tackle really important things. My team worked on Project MyGov (now MyUSA), where we'd been tasked with reimagining the relationship between the government and the people from a technology perspective.

When I returned to Intuit after that ended, there was a nagging feeling that something was missing. Sure, I loved my job working on TurboTax (and then the corporate PR team) and the people (so very much the people), and ended up being executive producer for Intuit's first major conference last fall. #ItRocked

Something was missing. My friend Jake Wood, co-founder and CEO of Team Rubicon, talks often about "the mission." It's sacred, and at the heart of what TR does: provides a mission to vets once they return to civilian life. 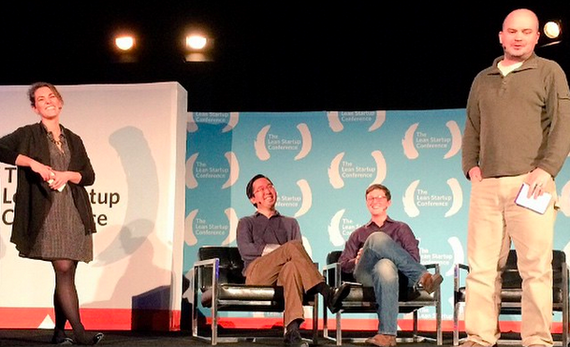 Cut to December 2014, as I watched Todd and the gang talk about the relatively-new government startup called US Digital Services (USDS) at the Lean Startup Conference in San Francisco. I couldn't stop grinning because: 1. They were remarkable up there; and 2. I realized we PIFs had been human MVPs for this blueprint of bringing outside technologists into government. And our little lean experiment was working like gangbusters. Later that day, Todd asked me to return to gov, and I said yes on the spot, without hesitation.

Because the mission. Which is a long way of saying that after six fantastic years at Intuit (minus the PIF six-month leave of absence) I resigned in January 2015. I left the private sector to serve my country again. Where I can do the most good for the most people. To infuse design thinking across federal government. To make the digital services the people interact with more usable, and useful. To make it easier for people to connect with their government. To influence experiences that yes, maybe even make the interactions delightful. #AspirationalFTW

In April I was thrilled to join the USDS umbrella as Deputy Director of 18F's consulting team. During my downtime, I moved back to San Diego from San Francisco, took a mini-sabbatical, and enjoyed reconnecting with my community and friends in San Diego  --  which was great for the soul  --  as well as do some pro-bono work (also awesome for the spirit).

I'm so proud to be back in gov. As the head of USDS Mikey Dickerson said: "We have found the problems. We need the human beings. We are calling on America's talented technologists to be part of the solution."

Happy to be one of the human beings. And honored to be able to work on improving this great nation of ours.

Want to help? Learn more about USDS or join us at 18F, a group within the U.S. General Services Administration that builds digital services for government.

Kara DeFrias served in the first class of White House Presidential Innovation Fellows and now works at 18F Consulting. She spent years as a UX strategist, technologist, and creative working in entertainment, professional sports, and TEDx. According to her 2nd grade report card, "Kara likes to talk. A lot." You can follow her on Twitter: @CaliforniaKara.

This article originally appeared on Medium.