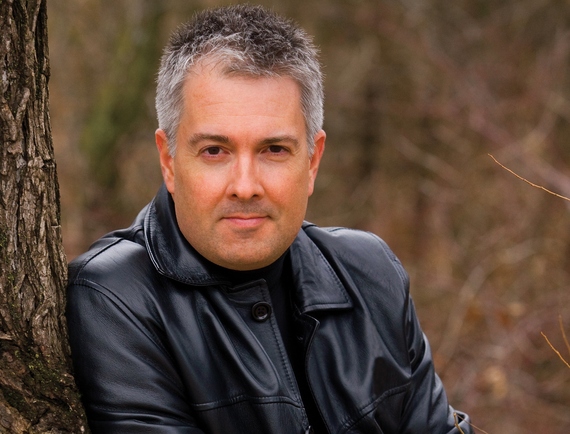 Brian Freeman is an internationally bestselling author of psychological suspense novels. His books have been sold in 46 countries, and have been Main Selections in the Literary Guild and Book of the Month Club. His novels have been nominated for prestigious awards, and two have won the Macavity Award and an award presented by the International Thriller Writers Organization. Before breaking into the fiction writing world, Brian was a communications strategist and business writer, and served as director of marketing and public relations for an international law firm.

Goodbye to the Dead is the 7th novel in the Jonathan Stride series. Jon Stride's first wife died of cancer eight years earlier, but memories hang over his relationship with fellow detective, Serena Dial. When Serena witnesses a brutal murder outside a Duluth, Minnesota bar, she stumbles onto a case going back to the last year of Cindy Stride's life. Though the murder weapon was never found, that earlier case led to the conviction and imprisonment of a prominent surgeon, Janine Snow. During the current investigation, Serena finds the gun used in the murder for which Dr. Snow was convicted; and Jon Stride begins questioning whether he made a terrible mistake eight years earlier by helping put an innocent woman in prison.

Jonathan Stride is a fascinating character. Tell us a little about him.
Jonathan Stride is very much the classic northern Minnesota man. He's had a good deal of loss in his life, he's not a super-hero and doesn't always make the right choices; but he's got an inner determination to seek out the truth. That's why I chose the name 'Stride' for him. I wanted a name that conveyed a sense of step-by-step determination. Despite the losses in his life, he tucks his chin against the wind and keeps moving on.

There's a very realistic trial depicted in Goodbye to the Dead. How did you gain knowledge of courtroom procedure?
Since my first novel Immoral, I haven't written a courtroom situation. One of the best things about writing books is your research takes you to discover different lines of work. I spent a lot of time with one of Minnesota's county attorneys talking about the specifics of trial strategy. He shared with me his expertise and even some trial transcripts. I absorbed a good deal of information trying to make the trial scenes as compelling and realistic as possible.

There's also a riveting scene of mayhem at a Duluth mall. Did current events play into your having included that as part of the novel?
Certainly, that was on my mind. The scene was similar to a situation which occurred about nine years ago. It was after Columbine, but before so many of these massacres that have been occurring at what seems to be a weekly or monthly pace. I wanted to capture how a terrible tragedy like that might enter a community like Duluth; and I also wanted to portray the impact it would have on the people involved. Additionally, I wanted to explore how local law enforcement could misread the signs of impending horror. As I said, Stride isn't a super-hero and couldn't see the signs of danger until it was too late.

You once said, 'My stories are about the hidden, intimate motives that draw people across some terrible lines.' Will you elaborate on that?
There are many writers who tell different kinds of stories in the thriller genre: political thrillers, spy thrillers, urban crime stories among others. I like to focus on psychological issues. For me, the drama emerges out of the emotions, secrets, and backgrounds of the characters. I like to tell small stories that ripple out of the dilemas and decisions people make. I love exploring different characters and their personal choices, along with the impact of those decisions.

That's where the thrills come from in my books. It's always coming from inside the heads of the characters.

And being inside the heads and lives of characters in a 'small' story makes it more the kind of story with which a reader can relate, right?
Absolutely. That's exactly what I hope for when I write a novel. I want the readers to put themselves in the characters' shoes. I'm always looking for balance: I want the relentless pace of a thriller, but I also want a character's story to linger in the reader's mind after the book has been read. I want the reader to think back about the story and reflect on what happened. Because I'm not writing about a super-hero, some readers might be screaming at Jonathan Stride for having made a wrong choice; but at the same time, they might find themselves shedding a tear for the character and the situation in which he's embroiled.

You also said, 'I don't like books where the characters are all good or all bad. I want them to live in the real world where morality means tough choices and shades of gray.' Tell us more.
I understand it can be very appealing to have the perfect hero who never makes mistakes and who always saves the day, but that's not how the world works. I think people are far more complex. As a writer, I like to present people and themes where there aren't easy answers. At the end of the novel, I always solve the puzzle, but that doesn't mean the characters don't remain struggling with loose ends or unanswered questions. I don't like presenting easy answers because I don't think there are any. I believe life is too complex for those simple solutions.

I know you became a published novelist at age 41, but said 'I started my first novel in the sixth grade.' What did you mean?
I can remember sitting in class in the sixth grade. I was starting a novel called Checkmate, which was about the murder of a chess grandmaster. Writing fiction has been in my blood for a very long time.

I understand you feel you had two unusual inspirations for your career. Tell us about them.
On the reading side, I always credit my grandmother. She was the great reader in the family and was a fan of mysteries and thrillers. She would always say, 'I'm reading this great book. It's got lots of bodies in it.' (Laughter). That's the environment in which I grew up.

The other person I always credit is my eighth grade composition teacher. She recognized my love of writing and told me, 'When you come to my class, don't worry about the lesson plan. Just sit and write your own story.' That's what I did through most of her classes. From that point forward, writing is what I knew I wanted to do.

What's the most important lesson you learned about writing?
I always tell aspiring writers one-hundred percent of unwritten books have never been published.

I really believe as writers, we tend to be our own worst enemies. We psych ourselves out; we lose confidence; we look at what we've written and want to tear it up. The fact is writing is a daily, internal battle. And, it doesn't get any easier the more books you write. You keep raising the bar and putting more pressure on yourself to be better.

You're hosting a dinner party and can invite any five people from any walk of life, living or dead, fictional or real people. Who would they be?
My wife would have to be there because if she wasn't with me in a social situation, I'd be completely lost. I recently lost my Dad, and it suddenly hit me that I'll never have another chance to talk with him again. I'd sure want to have him there, as well.

As a kid, one writer I loved reading was Robert Ludlum. I don't write books anything like his, but as a teenager, I just loved his novels. I never got a chance to meet him before he passed away. I would love to sit down and talk with him about what he did in the thriller world. As a kid, I loved classical music, especially the symphonies of Gustav Mahler. I had the impression he was a tortured soul in creating his work. Last guest would be Erma Bombeck, who would lighten the mood. She would bring everyone back into the real world, the reality of everyday life.

What's coming next from Brian Freeman?
I have two books coming out in 2017. I just wrapped up a new thriller set in San Francisco, and I'm already digging in on the next Jonathan Stride novel.

Congratulations on writing Goodbye to the Dead, a twist-filled psychological suspense novel exploring the nature of good, evil, duplicity, obsession, love and the power of past decisions.