For now Chrysler is idling in bankruptcy court. In a deal with Fiat, Fiat will get 35% of Chrysler in exchange for giving Chrysler access to its technology. This may help to jump-start Chrysler's innovation for the future. GM has until June 1 to put its restructuring plans on the table or go into bankruptcy protection. Ford, who is in much better shape financially, still has lacked vision in car line up for the future. In the midst of this very steep climb, out of a very deep pothole that Detroit finds itself in, is it the right time to talk about a renaissance? Yes. 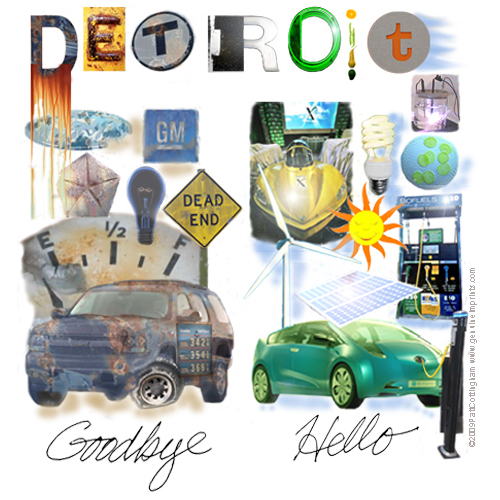 In a recent speech at the National Academy Of Sciences in Washington, President Obama spoke about a new deep commitment to funding scientific research and development stating, "I believe it is not in our American character to follow - but to lead. And it is time for us to lead once again. I am here today to set this goal: we will devote more than three percent of our GDP to research and development. This represents the largest commitment to scientific research and innovation in American history."

This challenge by President Obama for America to lead in innovations once again is reminiscent of President Kennedy's 1961 address to congress, where he challenged the country to put a man on the moon by the end of the century. On July 20, 1969, Neil Armstrong became the first man to set foot on the moon, followed by his fellow astronaut, Edwin Aldrin.

What will drive a renaissance for Detroit? How can Detroit set its GPS navigation system
to lead once again? Where will the new ideas come from to fuel Detroit's rebirth?

Will Detroit's innovation come out of research R&D labs in the US ? Right now there is controversial Low Energy Nuclear Reactions (LENR) research going on, also known as Cold Fusion. Companies like Energetics Technologies in the US are pioneering this research. Energetics Technologies, has developed a proprietary Super Wave Fusion in their labs. It claims that their Super Wave driven cells have generated over 25 times (2,500%) the amount of energy that was used to operate the system. They have been able to produce excess heat in a significant percentage of experiments using independent channels such as SRI International and American research lab and ENEA an Italian research lab. What could this mean for Detroit? If Cold Fusion research is successful in being applied to the commercial sector it could mean a form of energy that is cheap, limitless, and clean. Cars could have clean energy batteries that could run for 3-4 years and then be recharged. Think of the impact this would have on the environment and our need for foreign oil, or petroleum products of any kind.

It is too soon to know whether the application from laboratory to commercial use will be successful. Yet this is the kind of innovation that President Obama is asking for. Bold, visionary, the kind of revolutionary ideas that give you goose bumps just thinking about how the world could dramatically change because of them.

Goodbye to Detroit seen in a rear view mirror
Hello to Detroit with a renaissance horizon in its sights ahead.