It's not every day that you get to raid thousands of people's closets. But that's exactly what I did this summer as I thrifted my way around America for my documentary project, All Thrifty States: A Visual Journey through America's Collective Closets.

Not too long ago, I was a laid-off newspaper photojournalist trying to make a living as a freelancer in a down economy. I know how hard it is to adjust to the current economic reality. That's why I wanted Americans to see what they can find by digging a little deeper than their area malls and learning what the items in their homes can do for both their communities and the planet.

This project began with three things that intrigue me: social geography, photojournalism and thrift stores. Remember all that stuff you donated because you outgrew it, couldn't stand it, or just plain didn't need it anymore? I'm looking at all of it, taking photos and video, and learning all about you, about your communities and about America's consumption in general.

I've learned that thrift stores are not only some of the most social places you can shop, but also the most beneficial places. I've learned that there are thrifters from all walks of life, all backgrounds, all economic levels and every culture. I can't count how many times I've overheard cashiers greet customers by name or even know their children by name or watch shoppers give advice to one another about things they find. It's just not something I'm used to seeing in other shopping settings.

I met Emily in Nashville who -- because of the toys she found at a Goodwill® Outlet -- is now able to open a children's counseling office she dreamt of instead of having to work with adults first or pay thousands of dollars at a high-end retail store. As a result, she was able to spend less and get the same quality by shopping at Goodwill. I also met Yvonne, who credits her ability to cut corners on clothing by shopping secondhand over the years to allow her to save enough money to pay for a brand new house and two cars with cash.

I've learned that people give away the most amazing things -- from new iPods still in the box and steel mandolins worth thousands to cans of baby formula and locally made bread. I learned you can buy a professionally refurbished computer at the Omaha Goodwill's GoodBytes store for as little as $50.

So many of us are programmed to head straight to the nearest big box store whenever we need or want something. Whether it's school clothes, a new iron, a set of dishes or even a wedding gown, our first instinct is to buy something new that most likely has been shipped thousands of miles before landing in our hands. But we can find these necessities elsewhere too, when we know where to look.

I'll never forget shopping with my grandfather at the thrift store in his hometown. He would take me on Saturdays and buy me anything I wanted with his senior discount. I was able to buy the high-end brands of clothes I knew my family could never otherwise afford. I remember seeing an entire corner of the store full of used roller skates donated by a nearby rink. It was as though all of those skates were just fun waiting to be had. That is how I see most everything in thrift stores now. Donated items have never lost that magic for me. You never know what you'll find. It's only gotten better as I've grown older and learned to appreciate the value of things and the value of saving money whenever possible.

There are plenty of people at thrift stores already, buying your gently used stuff right now -- whether they need to save money or just want to make a positive environmental impact. They're shopping there because they consciously choose to. They're considering the value still left in things; the impact their purchases have on charities and the environment.

Buying used saves items from going to landfills. It provides jobs for people such as Goodwill® employees, who are trying to build their careers, earn paychecks and be independent. And it saves you money. It really benefits everyone involved.

This trip across America has been eye opening, even for a lifetime thrift store shopper like me. I'm far from getting to my goal of thrifting in all 50 states, but thanks to a lot of pledges on Kickstarter and a sponsorship from Goodwill, I've put a sizable dent in the endeavor.

I've seen some crazy stuff for sale -- from cattle brands and solar stoves to taxidermied frogs and organic eggs. There is literally something for everyone if you choose to look in the right place.

I met Tony in Ft. Collins who was pricing a donated cow-branding iron when I walked in the door. He powers his store with wind sources and powers his donation pickup vehicles with vegetable oil. He even got his dog secondhand from a customer who could no longer care for him.

I met KC who works at a store in Salt Lake City who got choked up remembering a girl she gave a Christmas blanket to. A year later she found out the girl had passed away and had requested to be buried with the gift KC gave her. I met Rose in Indianapolis who garnered advice from a flock of girls who were also browsing the store as she tried on outfits for an upcoming beauty pageant.

I had no idea the thrifting culture was so wide and varied, but I'm thrilled to witness and document it as I traveled across the country this summer in my fuel-efficient RV, which I named HaRVey.

So next time you collect the things you no longer need and donate them to Goodwill, stop for a moment and come on in. I guarantee you won't regret it.

Learning About the Positive Aspects of Secondhand Shopping
Gallery 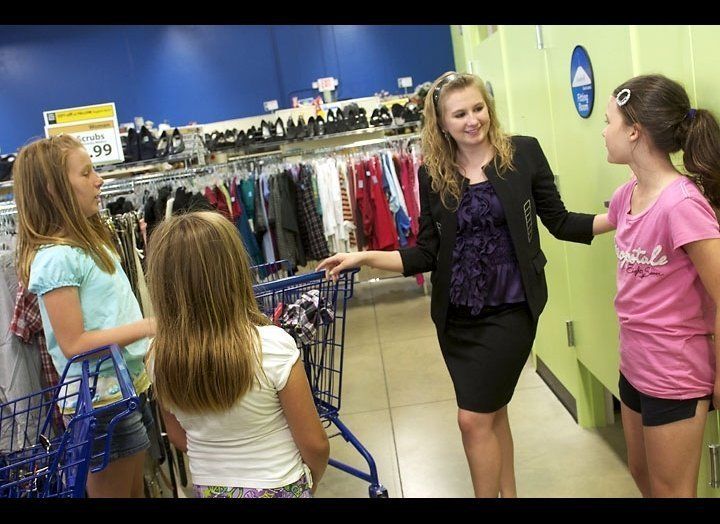