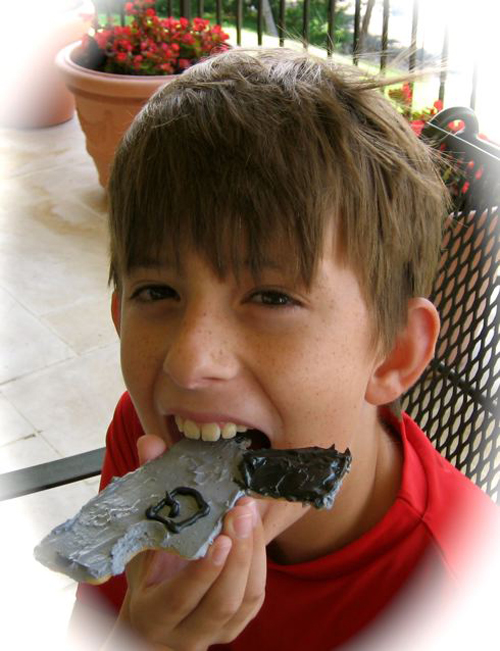 If the pro-gun Jews for the Preservation of Firearms Ownership has its way, parents across America will soon be sending their kids off to school with the advice "eat your Goody Gun from the back end; never point the muzzle at yourself or anbody else."

Yes, Goody Guns, the latest weapon in the arsenal of pro-gun America. According to JPFO, "America's Most Aggressive Defender of Firearms Ownership"--

`Goody Guns' consists of a special cookie cutter in the shape of a semiautomatic pistol. With the supervision and help of the adults in their lives, boys and girls can turn their own kitchens into `Arsenals of Liberty' by making gun-shaped cookies to keep and share, while absorbing firearms safety lessons the public schools would never teach them, and which the mass media don't want to see being taught.

Packed with each Goody Guns cookie cutter are a pair of tiny, toothpick-masted American flags, in case young bakers want to adorn their kitchen creations in honor of a uniquely American idea: an armed citizenry ready to defend itself from foreign invasion or domestic tyranny.

Once word of it gets out, the Goody Guns program will have the victim disarmers screaming from the housetops, because it addresses young children at pre-verbal level gun-grabbers can't hope to reach. By the time these children are old enough to understand the lies and propaganda being pushed on them, they'll be immune. In any case, the program is bound to drive victim disarmers even crazier than they are already.

Goody Guns can be used to teach kids elementary gun safety -- eat your Goody Gun from the back end; never point the muzzle at yourself or anybody else -- and, perhaps just as important, convey a liberating message that they're no longer under the mind-control of `political correctness.'

Some folks will wish to send their kids to school with a brown bag or lunch box containing Goody Guns, severely testing that form of fascism fashionaby called "zero tolerance" and revealing it for what it really is: zero tolerance for basic individual rights protected by the First, Second, Fourth, and Fifth Amendments to the United States Constitution.

What's the price of freedom? Only $9.95! But wait, don't answer yet! The Goody Gun cookie cutter can also be used for grilled cheese sandwiches! Cold cut sandwiches! Even a patriotic centerpiece! And for those who want to strike a blow for freedom while remaining observant, JPFO offers a Kosher sugar cookie recipe.

To parents and teachers who would argue that teaching schoolchildren to put handguns in their mouths--tasty or otherwise--isn't the best idea, the JPFO has a response that they can only hope will soon be chanted over jump ropes and jungle gyms in schoolyards across our country: "Put the gun-haters on the run with your Goody Gun!"