Google stock plunged 8 percent, according to Reuters, after the company's third quarter earnings apparently leaked ahead of schedule on Thursday.

A press release for the earnings report appeared on the Securities and Exchange Commission website with a note that the document was still awaiting a quote from CEO Larry Page. The results therein missed projections and caused analysts to question the strength of the company's core business.

Google's net revenue was $11.33 billion for the third quarter of the year, slightly short of the $11.83 billion that was expected, according to Business Insider. With the exception of some items, the company earned $9.03 a share, which Reuters reports is disappointingly shy of the $10.65 that analysts had expected. Net income was $2.18 billion, compared to $2.73 billion in the same quarter of 2011, per the leaked release.

While clicks on advertisements that appear on Google sites and partner sites increased 33 percent over the same quarter last year, the cost-per-click decreased by 15 percent from last year.

Google acquired Motorola Mobility for $12.5 billion earlier this year. Motorola's revenue for the third quarter of 2012 was $2.58 billion, which accounts for 18% of Google's consolidated revenues.

“The core business itself is slowing down,” Colin Gillis, an analyst at BGC Partners LP, told Bloomberg after the document hit the web.

Gillis also spoke with Reuters about Google's miss. He pointed a finger at mobile devices for the slumping advertising revenue and at Motorola for pulling down the company's quarterly earnings. Said Gillis:

We have been saying this thing was ripe for a pullback. It's not like they're Google not being Google, but you still have some major issues. [...] Click prices declined for the fourth consecutive quarter after rising for eight consecutive quarters before then. That's a negative. This is the mobile problem. [...] The other bit is the Motorola millstone had been ignored by the market, and - boom - now you've got weak revenue from Motorola. When you acquire a business and you're about to whack all kinds of people and close offices, you know what happens to the employees? They take their eye off the ball. Sales are down.

Reuters reporters also spoke with B. Riley analyst Sameet Sinha, who was also concerned about Google's search product. "The core business seems to have slowed down pretty significantly, which is shocking," Sinha told Reuters. "The only conclusion I can look at is, search is happening more and more outside of Google, meaning people are searching more through apps than through Google search."

Business Insider's Henry Blodget, however, argues that Google's core remains relatively strong when compared with past quarters; he places much of the blame on Motorola, which he calls a "dying elephant."

Google was scheduled to announce its earnings after the markets closed on Thursday. The company says printer R.R. Donnelley & Sons Co. is responsible for the premature release.

Scroll past the graphics for updates. 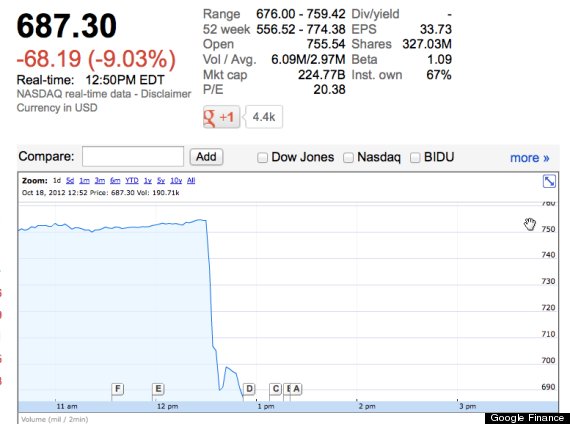 UPDATE: Google has refiled its earnings report on the SEC website. The new release includes the previously missing statement from CEO Larry Page, who congratulates the company on its consolidated revenue of $14 billion.

“We had a strong quarter," writes Page. "Revenue was up 45 percent year-on-year, and, at just fourteen years old, we cleared our first $14 billion revenue quarter [...] I am also really excited about the progress we’re making creating a beautifully simple, intuitive Google experience across all devices.”

It should also be noted that the company's net revenue, which totaled $11.53 billion, increased 19 percent over the same quarter last year.