Google has made its latest foray into social media with the launch of its +1 button, a tool that the search giant hopes will accomplish two feats: make Google a legitimate player in the social space while helping return more relevant search results to its users.

Google's promotional video for the +1 button explains the social feature thus: "When you click +1, you're telling your friends, your family and the rest of the world, 'this is something you should check out!'"

In that sense, the Google +1 button is similar to Facebook's "Like" button. But instead of your "Likes" -- or in this case, your +1's -- being posted to your Facebook profile, your +1's are collected in your Google profile and displayed when people within your Google social circle search for something you've recommended. (More on this later.)

If you've opted in via Google Labs, you'll see a translucent +1 button appear to the right of your Google search results. When you mouse over the button, it becomes solid and you can click it.

Here's what The Huffington Post's social sharing toolbar looks like: 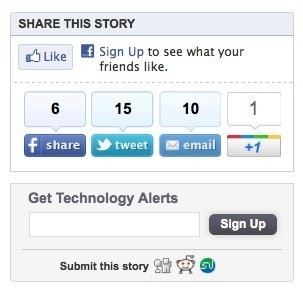 Each +1 is logged in your Google profile. There, you can manage what you've +1'd and choose whether or not you want to make this information public.

But even if your +1's are private in your Google profile, they'll still appear when somebody within your Google network does a search for something you've +1'd.

Google hopes that this personal touch to its search formula will help improve its search results. Google is betting that a person will be more likely to try a recipe or read a news article if somebody within her social circle has recommended it. Of course, recommendations from one's social connections are nothing new (see Facebook and Yelp!).

Google made changes to its search algorithm earlier this year amidst criticism that its searches were yielding spammy and low quality results.

Google has not yet found its foothold within social media, while Facebook and Twitter dominate the space. Google Buzz, initially touted as a Facebook competitor, is now largely considered a failure. In February, reports surfaced that the company tried unsuccessfully to buy Path, a photo sharing social networking site created by Facebook alumni.

Check out Google's explanation of its +1 button. Do you think Google's newest search feature will improve your web experience? Let us know in the comments.