The company announced they will introduce a feature called +1, which lets you recommend any webpage or ad you like. The results will then begin to appear in search results.

For example, if you're searching for a tapas restaurant, some of the results may show you a +1 from one of your Gmail contacts, or how many other strangers have +1-ed the same site.

Google touts the "relevance" of the +1 system, which uses information from people you know, at the moment you are actively searching for specific content. Unlike, Google's targeted ads, +1 results are directly tied to the queries you search, rather than directed at you in the hope that you may be interested.

While your Google contacts will initially determine the +1's you see, Google may eventually incorporate recommendations from your Twitter contacts. In case you're wondering who Google thinks your buddies are, you can check out the "Social Circle and Content" section on your Google Dashboard.

In January, Google rolled out an update to its Social Search feature, which highlights content that has been either created or shared by those in your social network. Google +1 draws from the same Social Circle, but adds the recommendation layer.

Google's +1 feature resembles Facebook's "Like" button. And +1 also brings the social layer to ads--something Facebook already implements, and somewhere the two companies draw massive revenue from. Advertisers will not be able to turn them off, though they will be able to see the statistics Google compiles.

To enable +1, users need to create a Google profile, or upgrade an existing profile. This account compiles your history of +1s and lets you delete them at will. Though not everyone will see +1 at first, users can opt-in early at Google's experimental site.

You can view a screenshot of the new +1 feature (below). Scroll further down for a video of how the service works. 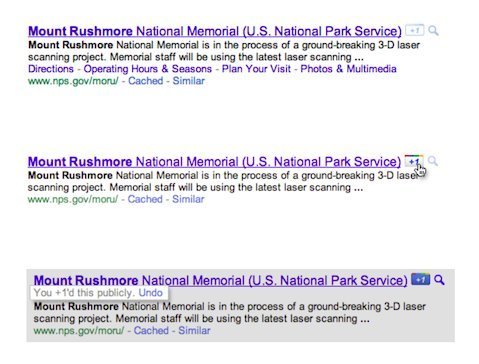