Here's a fun one.

There's an option in your Google account that displays your Ad Preferences page, which lets you see who Google thinks you are and what you're interested in.

If you're an avid Googler, then you probably use the search engine many times a day to find for driving direction, movie times, stock tips, local weather, cooking recipes, sweet deals on shoes and more. Based on what you've searched, Google makes inferences about your demographics and uses this information to show you relevant ads as you use Google products online.

[CORRECTION: A Google rep has pointed out that this feature reflects only the sites you've visited that are a part of Google's ad network and doesn't necessarily represent your complete Google search history.]

The search engine says that I'm interested in the following general categories: Arts & Entertainment, Computers & Electronics, Internet & Telecom, Law & Government, Science. Based on these "interests," Google has inferred that I'm a male, aged 35 - 44.

Want to find out who Google thinks you are? Click here to view your Google Ad Preferences page. You should sign into your Google account (via Gmail, Google+ or another Google service) if you aren't already.

You should see a page that looks like this: 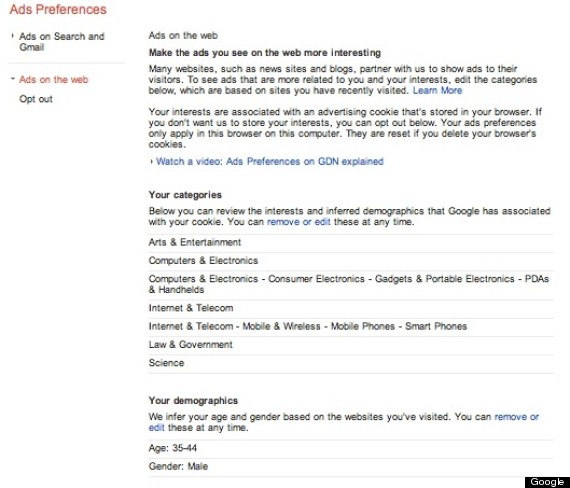 You can opt out of these Ad Preferences by clicking "edit or remove" under the Interests section and under the Demographics section.

Even if Google has your demographics totally wrong, privacy advocates are wary of the level of intimacy the web giant and many other online services collect about their users.

"Consumers have increasingly digital lives and they are developing an unfathomably large data trail every day," Rainey Reitman, activism director for privacy group Electronic Frontier Foundation, told the Daily Mail on Friday. "There has never been another time in history where privacy was under the kind of assault it is today."

Contrary to some reports, Google did not open the Ad Preferences page as a result of recent controversial modifications to its privacy policy. Ad Preferences have been viewable by users since 2009, according to a Google rep. The feature was expanded last October to give the user a more detailed view of his or her preferences. "The feature is designed to allay consumer concerns about tracking and targeting," Search Engine Land wrote at the time. "For advertisers, the new options will presumably provide more transparency and trust, and also ensure that marketers don’t bother to deliver ads to those who are actively negative about them."