Google is marking its 12th birthday with a celebratory "Goodle Doodle" on its homepage.

The search engine's signature red, blue, yellow, and green logo has been replaced by a drawing of a birthday cake by the artist Wayne Thiebaud (See screenshot below).

"Birthday Google" was a trending topic on Twitter, with tweeters posting birthday messages to the search engine (See the best tweeted birthday wishes below).

According to Google's Corporate Information, in 1998, "Google files for incorporation in California on September 4. Shortly thereafter, Larry and Sergey open a bank account in the newly-established company's name and deposit Andy Bechtolsheim's check." CNET wonders why Google chose Monday, September 27 to post its birthday "Doodle": "We're not sure exactly which landmark Google is actually celebrating today: the google.com domain was actually registered on 15 September 1997. Still, it's Google's party and it can doodle if it wants to." 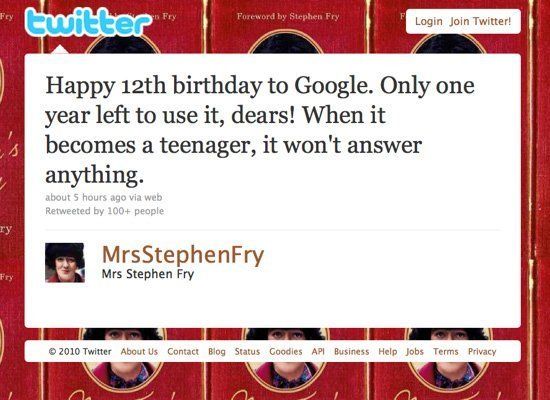