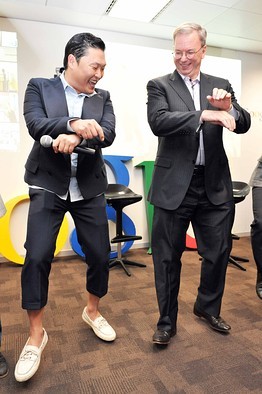 How the world did I meet and have fun with the chairman of GOOGLE!?? @ericschmidt!!! pic.twitter.com/mxodPqRz

According to the Wall Street Journal, Schmidt spoke about Psy’s YouTube success at a news conference before their meeting.

“With K-pop, we had a whole industry of extraordinarily high quality music that was largely not available outside of Japan and Korea and a couple other countries. YouTube made it mainstream and global,” Schmidt said.

“I think there will be many other such breakouts and such great talents. I think the story here is not really about YouTube or Google. It’s about the fact that there is a amazing talent all around the world that could not be discovered before and that now has a global audience, which the talent can benefit from financially, with recognition, lifestyle et cetera.”

Psy's "Gangnam Style" video has already racked up more than 290 million views on YouTube since its release in July, and it has spawned a whole legion of copycats, parodies and die-hard fans.

And now with Schmidt's funky footwork immortalized on video (see below), it seems the Google exec has succumbed to the lure of the catchy song and dance routine himself.

"Good for Schmidt. Homeboy knows how to have fun," TechCrunch declared.

For more on PSY's "Gangnam Style," click through this slideshow: