There are too many dudes in Google Doodles.

Of the 445 people honored by special Google logos between 2010 and 2013, a stunning 82.7 percent were men, according to a new report from SPARK, an activist movement for girls and young women, using Google's Doodle archive.

By comparison, approximately half of Earth's population is female, if you needed a reminder.

At least Google is aware of the problem and claims to be doing something about it.

"Women have been underrepresented in history in almost all fields: science, school curricula, business, politics -- and, sadly, doodles -- despite incredible contributions both directly and behind the scenes," Ryan Germick, team lead for Google Doodles, told The Huffington Post. "We’ve been working to fix the imbalance in our doodles.

"This year we're hoping to have women and men equally represented," Germick added. "So far this year we’ve done doodles for as many women as men, a big shift from figures below 20 percent in past years."

The lack of racial diversity in Google Doodles is stark, as well. According to SPARK, 73.9 percent of the Doodled were "unambiguously white."

Here's a chart from SPARK breaking down the Doodled by gender and race. "Uncertain" refers to people for whom SPARK couldn't readily identify a race. (Story continues after chart.) 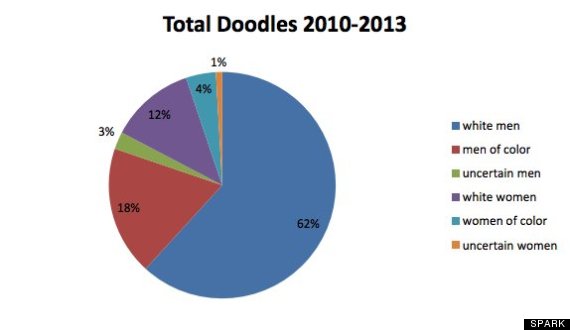 And the trends are heading in the wrong direction: 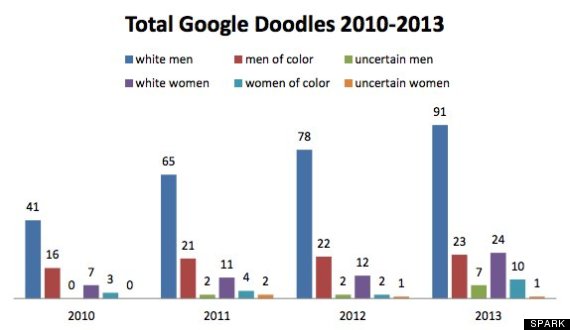 As you can see, Doodles have only gotten more white and more male.

The unconscious sexism apparent in Google Doodles echoes Silicon Valley's brogamming culture. There's a shocking lack of women in executive positions at tech companies, even by corporate America's standards. The individual stories of women being marginalized in the tech industry are just too many to list: The time a tech incubator threw a "Hackers and Hookers"-themed party. The time two entrepreneurs pitched a "tit-staring" app at TechCrunch Disrupt. The time Samsung decided it needed scantily-clad women to sell refrigerators and washing machines. That just covers part of 2013.

Nevertheless, Google has done a good job of making its collection of Doodles feel progressive and even iconoclastic. Last year, Google honored Cesar Chavez, instead of Jesus, on Easter Sunday, and weathered backlash from the religious right over it. During the Winter Olympics in Sochi, Google seemed to take a jab at Russia's anti-gay legislation with a series of rainbow-colored Doodles.

And to its credit, Google seems to have made an effort to pluck some less-well-known women from history for Doodling, including computer scientist Grace Hopper, singer Celia Cruz and women's suffrage leader Jane Addams.

Even if their gender and racial ratios were squared with the composition of the general population, Doodles are still a way for Google to somewhat disingenuously pass off the cultural authority of historical figures as its own, as Justin Moyer of The Washington Post argued last month.

"We’d be appalled if McDonald’s used Martin Luther King Jr.’s image to sell hamburgers or if Coca-Cola put Mohandas Gandhi on a soda can," he wrote. "So why is it any different when a tech behemoth uses [African American writer Zora Neale] Hurston to hawk searches?"