At first glance, Google Earth has given us the smoking-gun UFO photos many of us have been waiting for all our lives.

On second glance, it's back to the old drawing board.

A view of Cape Town, South Africa, on Google Earth appears to show a remarkably clear daylight UFO, flying above a mountain. In the picture, reportedly taken on July 15, the circular craft can first be seen in the distance as the Google Earth program pans around to take in a panorama vista.

It's only when the scene zooms in on a mountain and ocean in the background that the unidentified object comes into almost crystal clear view.

"The first thing I noticed was it looks like an example of a stitched together image where someone used an iPhone app that lets you put a fake UFO into a photo," said Marc Dantonio, chief photo and video analyst for the Mutual UFO Network, the largest international organization dedicated to studying and solving the UFO enigma. 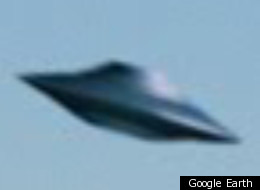 Dantonio knows a few things about what makes an image real or fake. His Connecticut-based company, FX Models, creates special effects and models for the History Channel and the Learning Channel in addition to holding numerous defense contracts with the Navy, Congress and the U.S. Joint Chiefs in Washington, D.C.

He said that just because an otherworldly image of an alleged alien ship shows up on a site like Google Earth doesn't necessarily mean that it's totally credible.

"Think about it. If you have that photo and you go, 'Oh, my God, look what I caught on this picture!', are you just going to then quietly stitch it together with the rest of your pictures and stick it in Google? I don't think so. I'm very skeptical," Dantonio told The Huffington Post.

One Web commenter wrote: "Just because it's clear, do not assume it's fake."

Dantonio disagrees. "I see four to six stitching borders -- or separate photos that are stitched together by the person who then uploaded it to Google," he said. "This is a whole bunch of separate images that are then run into a program which puts them all together.

"I think that they knew full well what they were uploading and they did it with a smile on their faces. And what's happened is just what they wanted."

The UFO in question looks remarkably like many previously-reported craft known as S4 -- the designation of a special location at the fabled Area 51 in Nevada where, supposedly, research was conducted on captured alien ships. 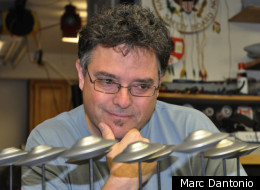 "The UFO is the classic S4 Area 51 UFO. We have a new set of UFO models that we're making called the UFO History Makers Series, and that S4 is in our first series," Dantonio said. "Whether those UFOs are real or not is immaterial -- but they've had an indelible mark on UFOlogy."

Yes, we live at a moment in history when computers and super-fast software programs can whip up a UFO faster than you can spell ET.

Dantonio cautions that seeing is not always believing -- at least as far as his eyes and experience tell him as he looks at the South Africa image.

"It's very clear that there's been a tremendous amount of image manipulation here. I can see the Photoshop brush markings, and the stitching borders," he said.

Or you can simply check it out right here: