The U.S. Patent Office published a patent on Tuesday revealing that Apple has experimented with producing a set of augmented-reality eyeglasses, sparking speculation that Apple will go head-to-head (and eye-to-eye) with Google's much-hyped Glass device.

The patent was filed in 2006 but only granted on July 3, 2012. Interestingly, one of the two men credited with the patent is Tony Fadell, the legendary "Father of the iPod" who has since left Apple to focus on his latest creation, the Nest Learning Thermostat.

In its patent filing, Apple does not delve too deeply into what its heads-up display (HUD) device would actually be able to do; the patent simply covers the method by which Apple would project images onto a display in front of the eye. The patent does mention connectivity to an external device with a 16:9 aspect ratio, which conspiracy theorists will note is supposedly the aspect ratio for the next iPhone. Again, however, this patent was filed in 2006: Apple presumably meant, more generally, that its head-mounted displays would be able to project the images of a connected device, like a smartphone or television.

Just as Google and Apple currently find themselves at war in the smartphone and tablet aisles, so too could they be fighting for supremacy in the wearable computer department.

The granted patent does not cite or mention Google or Google Glass (again, since it was filed in 2006) but, because of the huge amount of public interest in and debate about Google's glasses, Apple's head-mounted device filing is largely being viewed as a potential counter move, should Google Glass turn out to be popular. (The headline of the Wired article concerning this patent: "Take That, Google Glass"). 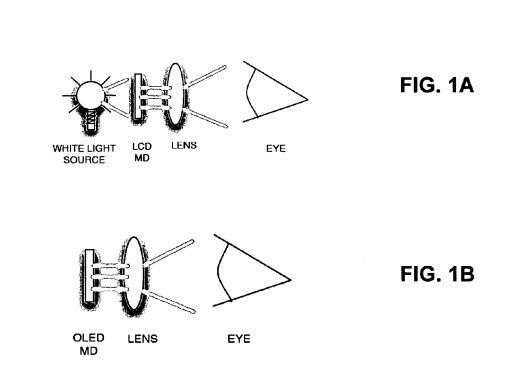 A detail from Apple's patent filing, showing near-eye displays for a head-mounted device.

Google expects to release Glass to the public in early 2014, according to Glass project head and Google co-founder Sergey Brin, at a cost somewhere in the hundreds of dollars. The capabilities of the final Google Glass product are not yet known, as the device is still a work-in-progress; camera functionality, Wi-Fi connectivity, and mapping software are all expected. At its I/O Conference in June, Google made available early prototypes of its Glass to developers to tool around with and make suggestions for the final product; for $1,500, those prototypes should ship in early 2013.

If Google Glass does turn into a smash success, Apple will, at the very least, not be caught completely flat-footed. And even if Apple never does make a Glass rival, the company's lawyers certainly do know how to wield a patent.