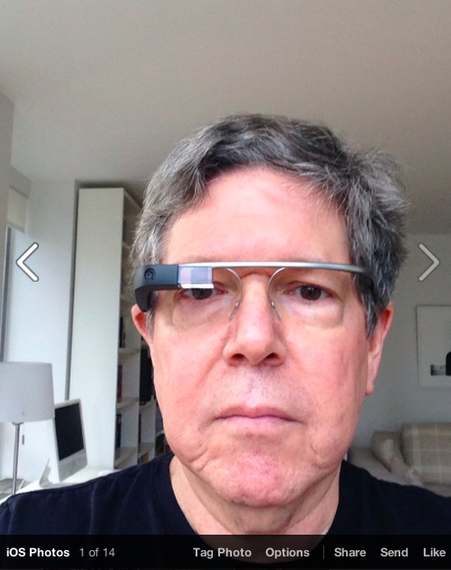 I have now been using these for two days.

It's a base-line game changer.

Like iPhones or PCs, Glass is going to change pretty much everything.

Some people call this 'wearable' computing, but after two days, I prefer to think of this as 'integrated' computing. You are, in effect, (in reality), integrated into the web -- all the time.

We have been watching a steady march toward greater and greater integration since the introduction of the first computers.

When I was a student at Williams in the 1970s, there was a Computer Lab with a giant IBM Mainframe. You had to book time. You had to go over with your trays of punchcards. Getting on a computer was difficult, if not impossible.

The introduction of the first PCs in the late '70s meant that access to a computer was vastly easier, but still something you had to consciously do. You had to go home, sit in front of it and fire it up.

Laptops made them portable, but the iPhone made the biggest quantum shift. Now, instead of having to consciously sit down at your computer, you carried it with you all the time. That, and the concurrent rise of interconnectivity that the web brought about, meant that suddenly more than a billion people were online all the time.

Now, with Glass (and surely there are other similar pieces of hardware that will follow) even the physical act of taking out your phone and looking at the screen are done away with. Now, you (and soon more than a billion other people) will effectively be online all the time.

This is a change. A big change.

We are being integrated into the web at an astonishing pace, and my own limited experience of but two days so far, tells me that most people will actually find this a very attractive and enticing experience.

Today, according to a Nielsen study, the average American spends an astonishing 8.5 hours a day staring at screens -- from smart phones to computers to tablets to TV.

Now, with the advent of Glass, we are about to enter a world in which the average American (and everyone else I am sure) will spend pretty much all their time in front of a screen -- both accessing content, and creating it.

This is a fundamental change in human behavior -- something we as a species have no prior experience with. Nothing like this has ever happened before, but it is going to happen.

I can't say how all this will pan out in the end.

Jaron Lanier had a fascinating piece about this trade-off between technology and freedom in last week's New York Times.

The only way to persuade people to voluntarily accept the loss of freedom is by making it look like a great bargain at first.

Consumers were offered free stuff (like search and social networking) in exchange for agreeing to be watched.

Based on my very limited and yet addictive experience (so far), I can only say that I think Glass will become as ubiquitous as iPhones and PCs. Maybe moreso. But they will certainly change the way that we live in a very fundamental way.

I am reminded here of a quote from the play and movie Inherit The Wind. Henry Drummond (Henry Fonda as the Clarence Darrow character) is making his closing argument in defense of Bert Cates, who has been charged with the crime of teaching evolution:

Progress has never been a bargain. You have to pay for it.

Sometimes I think there's a man who sits behind a counter and says, "All right, you can have a telephone but you lose privacy and the charm of distance.

Madam, you may vote but at a price. You lose the right to retreat behind the powder puff or your petticoat.

Mister, you may conquer the air but the birds will lose their wonder and the clouds will smell of gasoline."